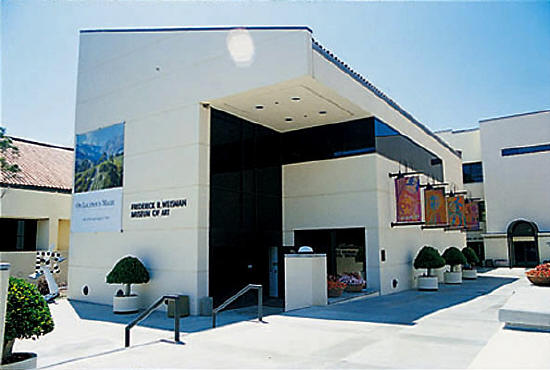 Pepperdine University is a private University of higher learning affiliated with the . The university's location overlooks the Pacific Ocean and is adjacent to the city limits of Malibu in unincorporated Los Angeles County, , .

In February 1937, against the backdrop of despair and pessimism of the , founded the University as a Christian liberal arts college in the city of Los Angeles. On , , 167 new students from 22 different states and two other countries entered classes on a newly built campus on 34 acres at West 78th Street and South Vermont Avenue in the Vermont Knolls neighorbood of (coord|33|58|04.72|N|118|17|39.90|W),

Pepperdine had built a fortune founding and developing the Western Auto Supply Company which he started with a $5 investment, but his prosperity led to his greater ambition to discover "how humanity can be helped most with the means entrusted to my care. I consider it wrong to build up a great fortune and use it selfishly." Mr. Pepperdine voiced his two-fold objective for the college that bore his name, "First, we want to provide first-class, fully accredited academic training in the liberal arts . . . . Secondly, we are especially dedicated to a greater goal—that of building in the student a Christ-like life, a love for the church, and a passion for the souls of mankind."Fact|date=January 2008

By the 1960s, the young college faced serious problems. The area around the Vermont Avenue campus developed issues with crime and urban decay; tensions also arose due to the Civil Rights Movement and attempts to circumvent it such as , which challenged federal laws. The situation exploded in the 1965 . In 1969 activists in the Watts area threatened to burn down the campus; however, they were talked out of it after all-night negotiations by then-President M. Norvel Young. In addition, the Vermont Avenue campus was running out of room to expand.

In 1967, the school put forth a multi-campus idea that would move the undergraduate campus to an alternative location; a committee formed and looked at numerous locations, including sites in Valencia, Orange County, Ventura County and . Pepperdine favored the Westlake Village location until the Adamson-Rindge family, who owned hundreds of acres in Malibu, offered convert|138|acre|km2 of Malibu land; despite concerns over building costs on the mountainous site, the school decided to move forward based on its prime location and potential for raising donation. On , , the university broke ground to commence construction and in September 1972 the Malibu campus opened for student enrollment.

(The old Pepperdine University campus was sold to , whose Pastor, Frederick K.C. Price, then oversaw construction of the "FaithDome," the largest domed-church in the United States, seating over 10,000).

Pepperdine gained university status in 1971 when the School of Law was added and the business and education departments became separate schools. In the 1980s, Pepperdine rose to prominence as one of the United States' leading centers of conservative politics, attracting many conservative-leaning professors from nearby UCLA and USC. Prominent conservatives on the Pepperdine faculty have included , , , , , and .

In 1993 and 1996, massive brushfires threatened the campus with destruction, but firefighters succeeded in protecting almost all structures. On October 21, 2007, fast-moving wildfires forced campus residents to relocate and shelter in the Firestone Fieldhouse and Cafeteria, plus evacuations of local homes and businesses. [Associated Press according to CNN] Similarly, another November 2007 fire in Corral Canyon, accidentally set off by a group of Los Angeles youths sparked fear of another evacuation, though none was necessary.

The main campus is nestled among several ridges that overlook the and the Pacific Coast Highway in Malibu, California. The main campus entrance road ascends a steep, well-groomed grassy slope past a huge stylized cross, known as the Phillips Theme Tower, symbolizing the university's dedication to its original Christian mission. Most buildings were constructed in a typical 1980s-style reinterpretation of classic Californian and Mediterranean architecture (red tile roofs, white stuccoed walls, large tinted windows). There are views of the Pacific Ocean, Catalina Island, Palos Verdes Peninsula, Long Beach and the westside of Los Angeles from numerous points. Graduations take place at Alumni Park, a broad expanse of lawn overlooking Pacific Coast Highway and the Pacific Ocean. The main academic plaza for undergraduate programs of Seaver College lies just above Alumni Park and includes Stauffer Chapel, Tyler Campus Center, Payson Library, and the Ahmanson Fine Arts Center. Undergraduate housing and athletic facilities sit to the north/northwest of the academic complex. The Law School exists even higher above these areas. The central campus is surrounded by a loop road consisting of Seaver Drive, Huntsinger Circle, and John Tyler Drive. Banowsky Boulevard separates Alumni Park from the main academic complex and is named in honor of William S. Banowsky, the 4th president of Pepperdine.

Spur roads to the east of the central part of campus lead to faculty housing. To the northwest, Via Pacifica winds uphill to the Drescher Graduate Campus, completed in 2003 and home to the School of Public Policy, the Villa Graziadio conference center, as well as the fulltime programs of the Graziadio School of Business and Management and the Graduate School of Education and Psychology. Housing for graduate students, undergraduate honors students, and faculty are also located here.

Seaver College is led by Dean Rick Marrs, who took over the Deanship upon the retirement of David Baird at the end of the 2008 Spring semester.

The Graziadio School of Business and Management and the Graduate School of Education and Psychology are headquartered in West Los Angeles at the next to Interstate 405. These two schools also offer programs at graduate campuses in Encino, Irvine, Long Beach, Pasadena, Santa Clara, and Westlake Village. International programs of the University's various schools take place in , , , , , , , , , , Chiang Mai, , and .

Graziadio School of Business and Management

Pepperdine University's George L. Graziadio School of Business and Management enrolls approximately 2,000 students in its full-time and part-time degree programs. The school was founded in 1969, and has since graduated over 30,000 alumni. Dr. Linda Livingstone has served as Dean since 2002.

The is located adjacent to the Seaver College Campus, and enrolls about 670 students who come from all parts of the country. It is fully approved by the and is a member of the . The School of Law recently has attained membership in the prestigious . [ [http://law.pepperdine.edu/news/052008_coif.html News | School of Law | Pepperdine University ] ] [ [http://www.orderofthecoif.org/COIF-members.htm member chart ] ] Pepperdine's Straus Institute of Dispute Resolution is consistently ranked as the number one dispute resolution program in the country, offering LL.M., master's and certificate programs. Some of its other newer degree offerings include the juris doctor/master of divinity in conjunction with Pepperdine's Seaver College. Other joint degree programs include the JD/MBA, JD/MPP, and JD/MDR. The school offers both a summer session and a fall semester in London, . is the current dean.

Graduate School of Education and Psychology

Approximately 120 graduate students are enrolled in the , which offers a two-year masters of public policy degree. Not simply the study of government, is the study of how governments, non-profits, and even individuals and businesses address problems of public concern. Students specialize in economics, international relations, American politics, or local/regional policy in addition to their core studies and are required to complete a policy-related internship. James Wilburn is the current dean.

The current dean of the Public Policy School is James R. Wilburn.

Pepperdine University participates in the , a conference made up exclusively of religiously affiliated schools in which it is the only member that is not Catholic. Appropriate for its location adjacent to the Pacific Ocean, Pepperdine's teams are known as the Waves.

Pepperdine University was recently ranked by the Sears Cup as having the most successful athletic program for non-football schools. ( was ranked the most successful Division I athletic program with football.) Pepperdine University sponsors fourteen NCAA Division I intercollegiate athletics teams: baseball, basketball, cross country, golf, tennis, volleyball and water polo teams for men; and basketball, cross country, golf, soccer, swimming, tennis and volleyball for women. There are also a number of intercollegiate sports clubs such as men's soccer, men's and women's lacrosse, Ultimate Frisbee and ice hockey.

The "" ranked Pepperdine on the list of colleges with "Dorms Like Palaces" in 2004 and 2007 and #1 under "Most Beautiful Campus" in 2006 and 2007. Pepperdine also appeared on other lists including "Students Pray on a Regular Basis," and "High Quality of Life." Because of its Christian affiliation, many contend that the student body breeds a religious and politically conservative atmosphere. [ [http://www.townhall.com/columnists/MikeSAdams/2006/12/11/colleges_to_attend,_part_i Townhall.com::Colleges to Attend, Part I::By Mike S. Adams ] ] Princeton Review also ranked Pepperdine University #13 in its list "Alternative Lifestyles not an Alternative". [ [http://www.princetonreview.com/college/research/rankings/rankingDetails.asp?CategoryID=2&TopicID=25 Register for The Princeton Review ] ] In 2007 Pepperdine was named as "One of the Top Producing Colleges and Universities" by the . The 2005 edition of the "" has also noted Pepperdine as being one of the nation's largest conservative colleges. "" (see “Pepperdine at Glance” in the external links section) has ranked Pepperdine as the 54th best national university for undergraduate education, its law school is rated as 59th among the top 100 law schools in the country by U.S. News and World Reports, and the Straus Institute of Dispute Resolution is currently ranked number 1 in the nation. [ [http://www.usnews.com/usnews/edu/grad/rankings/law/brief/lawrank_brief.php USNews.com: America's Best Graduate Schools 2008: Top Law Schools ] ] The Graziadio School of Business & Management has been consistently ranked by BusinessWeek as having one of the world's Top 25 Executive programs, and "US News & World Report" has ranked the Graziadio School's Fully-Employed MBA program in the world's Top 30 and its Full-Time MBA program in the world's Top 100.Fact|date=June 2007 Financial Times magazine has ranked the Graziadio School's EMBA in the world's Top 50.Fact|date=June 2007