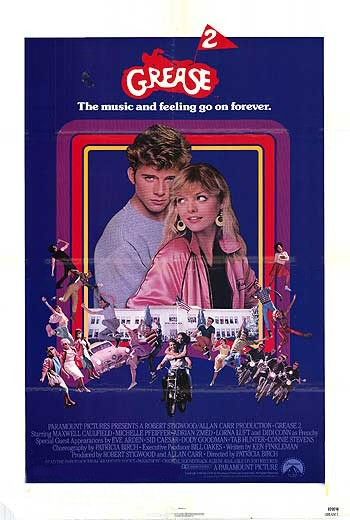 "Grease 2" is the 1982 to the 1978 smash hit "Grease". The movie was strongly criticized by many as derivative of the original, and the film did poorly at the box office. In recent years, it has attained a cult following. It has surfaced on channels such as (which has shown it on their show "Movies That Rock"), , and Bravo. It was shot entirely in much like the prequel.

The movie starts in the fall (autumn) of (two years after the original) with a new group of students who are members of both the T-Birds, headed by Johnny Nogerelli (), and the Pink Ladies, headed by Stephanie Zinone (). He wants to keep dating her though her feelings for him are no longer there.

Meanwhile, Michael (), an exchange student from Australia arrives. He is the cousin of also from Australia, the character played by in the first movie. Sandy's friend Frenchy (), who is returning to Rydell High to get her diploma was told about Michael's arrival in a letter from Sandy and helps Michael get settled into the school atmosphere at Sandy's behest. Michael soon becomes fascinated by Stephanie and asks her out, but she doesn't feel like going out with a grade-worried, good student like Michael. Stephanie tells Michael she'd like to date someone with a motorcycle, a "Cool Rider." This galvanizes Michael to start doing the T-Birds' homework for money, so he can buy his own bike to impress Stephanie.

A fight ensues between the T-Birds and their rivals, the Cycle Lords (headed by Balmudo Dennis C. Stewart, who had played the leader of the Scorpions gang from the original movie) after a game of . As the T-Birds are being beaten, a mysterious biker emerges and beats the Cycle Lords, embarrassing them and conquering Stephanie along the way. Now Michael has a dilemma: either keep on going as the mysterious biker, or take the risk of telling Stephanie that he is the biker who has her so impressed and maybe lose her forever.

Johnny is jealous of Stephanie and the Mysterious Biker (Michael). He vows to retaliate against the biker, threatening to Stephanie that he will hurt him the next time he sees him.

At the "June Moon Talent Contest" (as summer graduation approaches), the T-Birds chase the mysterious biker into a construction site ("Dead Man's Curve"), from where he is forced to jump into the night. The T-Birds look around to try to find their victim. Everyone assumes he has died even though there is no real evidence to support the fact, and Stephanie is devastated. Later during the talent show, Stephanie "spaces out" (possibly due to grief) and turns up singing "Love Will Turn Back the Hands of Time" in the middle of the Calendar Girls' (Pink Ladies') performance. This appears to the audience to be a solo, but to Stephanie, it is a duet with her recently lost love, the mysterious biker, who now seems to be in Biker Heaven.

Johnny and Stephanie are crowned king and queen of the talent show. At the Rock-a-Hula Luau the next day, however, the Cycle Lords reappear, threatening to destroy everything within sight. Out of nowhere, the mystery biker reappears, to Stephanie's relief and happiness. He finally reveals himself as Michael.

While Stephanie is shocked, she also realizes at that moment that the man she had loved all along was Michael, so she goes over to him and expresses her love to him with a long, passionate kiss and soon begin to slow dance to "We'll Be Together". Johnny is shocked as well. Admiring Michael for the way in which he had beaten their arch-rivals the Cycle Lords twice, he decides to make Michael a member of the T-Birds by handing him a T-Bird jacket. The film concludes with graduation and poses for the yearbook (similarly to the first movie).

* as Michael Carrington
* as Stephanie Zinone
* as Johnny Nogerelli
* as Paulette Rebchuck
* as Louis DiMucci
* as Sharon Cooper
*Christopher McDonald as Goose McKenzie
* as Rhonda Ritter
*Pamela Segall as Dolores Rebchuck
* as Davey Jaworski
* as Frenchy
* as Principal McGee
* as Coach Calhoun
* as Blanche Hodel
* as Mr. Stuart
* as Vira L.P. Enguin
* as Miss Yvette Mason
* as Eugene Felsnic
*Dennis C. Stewart as Balmudo
*Jean and as Twin Sorority Girls

"Grease 2" was considered a flop to critics and audience members. It did not live up to the hype as the previous movie had. Along with criticism, most of the songs that were sung such as "Score Tonight", "Do It For Your Country" and "Reproduction" did not connect with the storyline at all. The most significant milestone for which this movie would be remembered was that it was Michelle Pfeiffer's first major role. While the music was catchy, the songs did not reflect the times in which the movie was set as its predecessor did. "Grease" brought a wave of nostalgia for 1950s music and featured some old standards sung by . "Grease 2" had no songs from the early 1960s, except for a strain of "" playing on a radio in the Bowl-A-Rama.

"Grease 2" earned just over $15 million worldwide. Part of this failure can be attributed to the fact that it opened in the same weekend as the blockbuster "". Fact|date=August 2008