The Gazette, often called the Montreal Gazette to avoid ambiguity, is the only English-language daily newspaper published in Montreal, Quebec, Canada, with three other daily English newspapers all having shut down at different times during the second half of the 20th century.

In 1778, Fleury Mesplet, founded the French-language newspaper called La Gazette du commerce et littéraire, pour la ville et district de Montréal. This paper was shut down in 1779, with Mesplet and the editor, Valentin Jautard, being imprisoned. Mesplet began a second weekly in 1785, La Gazette de Montréal, which was the direct ancestor of the current newspaper. The Gazette evolved from a French-language newspaper to a dual French-English format to the present English-only paper.

For many years, The Gazette was caught in a three-way fight for the English newspaper audience in Montreal with the tabloid Montreal Herald and the broadsheet Montreal Star. The Gazette was second in circulation to the Montreal Star, which sold more newspapers in the city and had a significant national reputation in the first half of the 20th century. The Montreal Herald closed in 1957, after publishing for 146 years. The Montreal Star, part of the Free Press chain (which owned The Globe and Mail and the Winnipeg Free Press), was hit by a long strike action and ceased publication in 1979, less than a year after the strike was settled. 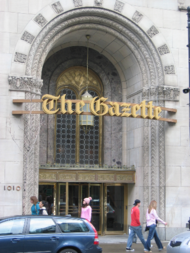 Offices of The Gazette on Saint Catherine Street in Montreal

In 1968, The Gazette was acquired by the Southam newspaper chain, which owned major dailies across Canada. In 1996, the Southam papers were bought by Conrad Black's Hollinger Inc. Then in August, 2000, Hollinger sold the Southam newspapers, including The Gazette, to Canwest Global Communications Corp., controlled by the Winnipeg-based Asper family. In 2010, a new media group, Postmedia, bought the Gazette and other papers from the financially troubled Canwest.

To celebrate its 150th anniversary, The Gazette published a facsimile of one of its earliest issues. Much effort was made to use a type of paper that imitated 18th century paper, with fake chainlines and laidlines to make the paper look old.[1]

Today, The Gazette's audience is primarily Quebec's official English-speaking minority, which accounts for about 13 percent[citation needed] of the population of the province. Out of the four dailies published in Montreal, the other three being the French-language newspapers (La Presse, Le Journal de Montréal, and Le Devoir), The Gazette has the third largest circulation, behind Le Journal de Montréal and La Presse.

In recent years, The Gazette has stepped up efforts to reach bilingual francophone professionals and adjusted its coverage accordingly. The publisher of The Gazette is Alan Allnutt, who served as editor-in-chief of the paper from 1996 to 2000. The current executive editor is Raymond Brassard, while the managing editor is Catherine Wallace.[2]

Past and present personalities