Engineering tolerance is the permissible limit or limits of variation in

Dimensions, properties, or conditions may vary within certain practical limits without significantly affecting functioning of equipment or a process. Tolerances are specified to allow reasonable leeway for imperfections and inherent variability without compromising performance.

Tolerances are often set by design engineers and published in specifications or contracts. Many technical standards have tolerances agreed upon by consensus discussions and sometimes formal voting procedures.

It is often desirable to specify the largest possible tolerance while maintaining proper functionality. Closer or tighter tolerances are more difficult, and hence costly, to achieve. Conversely, larger or looser tolerances may significantly affect the operation of the device.

Tolerance is different from safety factor, but an adequate safety factor will take into account relevant tolerances as well as other possible variations.

A primary concern is to determine how wide the tolerances may be without affecting other factors or the outcome of a process. This can be by the use of scientific principles, engineering knowledge, and professional experience. Experimental investigation is very useful to investigate the effects of tolerances: Design of experiments, formal engineering evaluations, etc.

A good set of engineering tolerances in a specification, by itself, does not imply that compliance with those tolerances will be achieved. Actual production of any product (or operation of any system) involves some inherent variation of input and output. Measurement error and statistical uncertainty are also present in all measurements. With a normal distribution, the tails of measured values may extend well beyond plus and minus three standard deviations from the process average. One, or both, tails might extend beyond the specified tolerance.

The process capability of systems, materials, and products needs to be compatible with the specified engineering tolerances. Process controls must be in place and an effective Quality management system, such as Total Quality Management, needs to keep actual production within the desired tolerances. A process capability index is used to indicate the relationship between tolerances and actual measured production.

The choice of tolerances is also affected by the intended statistical sampling plan and its characteristics such as the Acceptable Quality Level. This relates to the question of whether tolerances must be extremely rigid (high confidence in 100% conformance) or whether some small percentage of being out-of-tolerance may sometimes be acceptable.

An alternative view of tolerances

Genichi Taguchi and others have suggested that traditional two-sided tolerancing is analogous to "goal posts" in a football game: It implies that all data within those tolerances are equally acceptable. The alternative is that the best product has a measurement which is precisely on target. There is an increasing loss which is a function of the deviation or variability from the target value of any design parameter. The greater the deviation from target, the greater is the loss. This is described as the Taguchi loss function or "quality loss function", and it is the key principle of an alternative system called "inertial tolerancing".

Research and development work conducted by M. Pillet and colleagues[1] at the Savoy University has resulted in industry-specific adoption.[2] Recently, the publishing of the French standard NFX 04-008 has allowed further consideration by the manufacturing community. 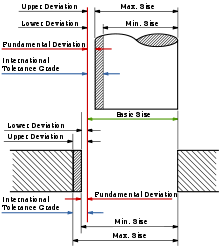 Summary of basic size, fundamental deviation and IT grades compared to minimum and maximum sizes of the shaft and hole.

Dimensional tolerance is related to, but different from fit in mechanical engineering, which is a designed-in clearance or interference between two parts. Tolerances can be applied to any dimension. The commonly used terms are:

For example, if a shaft with a nominal diameter of 10 mm is to have a sliding fit within a hole, the shaft might be specified with a tolerance range from 9.964 to 10 mm (i.e. a zero fundamental deviation, but a lower deviation of 0.036 mm) and the hole might be specified with a tolerance range from 10.04 mm to 10.076 mm (0.04 mm fundamental deviation and 0.076 mm upper deviation). This would provide a clearance fit of somewhere between 0.04 mm (largest shaft paired with the smallest hole, called the "maximum material condition") and 0.112 mm (smallest shaft paired with the largest hole). In this case the size of the tolerance range for both the shaft and hole is chosen to be the same (0.036 mm), meaning that both components have the same International Tolerance grade but this need not be the case in general.

When no other tolerances are provided, the machining industry uses the following standard tolerances:[3][4]

When designing mechanical components, a system of standardized tolerances called International Tolerance grades are often used. The standard (size) tolerances are divided into two categories: hole and shaft. They are labelled with a letter (capitals for holes and lowercase for shafts) and a number. For example: H7 (hole tapped hole or nut) and h7 (shaft or bolt). H7/h6 is a very common standard tolerance which gives a rather tight fit, but not so tight that you can't put the shaft in the hole, or turn the nut on the bolt, by hand. The tolerances work in such a way that for a hole H7 means that the hole should be made slightly larger than the base dimension (in this case for an ISO fit 10+0.015−0, meaning that it may be up to 0.015 mm larger than the base dimension, and 0 mm smaller). The actual amount bigger/smaller depends on the base dimension. For a shaft of the same size h6 would mean 10+0−0.009, which is the opposite of H7. This method of standard tolerances is also known as Limits and Fits and can be found in ISO 286-1:2010 (Link to ISO catalog).

The table below summarises the International Tolerance (IT) grades and the general applications of these grades:

An analysis of fit by Statistical interference is also extremely useful: It indicates the frequency (or probability) of parts properly fitting together.

An electrical specification might call for a resistor with a nominal value of 100 Ω (ohms), but will also state a tolerance such as "±1%". This means that any resistor with a value in the range 99 Ω to 101 Ω is acceptable. For critical components, one might specify that the actual resistance must remain within tolerance within a specified temperature range, over a specified lifetime, and so on.

Many commercially available resistors and capacitors of standard types, and some small inductors, are often marked with coloured bands to indicate their value and the tolerance. High-precision components of non-standard values may have numerical information printed on them.

Difference between allowance and tolerance

The terms are often confused but sometimes a difference is maintained. See Allowance (engineering)#Confounding of the engineering concepts of allowance and tolerance.