A tape measure or measuring tape is a flexible form of ruler. It consists of a ribbon of cloth, plastic, fiber glass, or metal strip with linear-measurement markings. It is a common measuring tool. Its flexibility allows for a measure of great length to be easily carried in pocket or toolkit and permits one to measure around curves or corners. Today it is ubiquitous, even appearing in miniature form as a keychain fob, or novelty item. Surveyors use tape measures in lengths of over 100 m (300+ ft).

Tape measures that were intended for use in tailoring or dressmaking were made from flexible cloth or plastic. Today, measuring tapes made for sewing are made of fiberglass, which does not tear or stretch as easily. Measuring tapes designed for carpentry or construction often use a stiff, curved metallic ribbon that can remain stiff and straight when extended, but retracts into a coil for convenient storage. This type of tape measure will have a floating tang on the end to aid measuring. The tang will float a distance equal to its thickness, to provide both inside and outside measurements that are accurate. A tape measure of 25 or even 100 feet can wind into a relatively small container. The self-marking tape measure allows the user an accurate one hand measure and mark without an outside device.

The design on which most modern spring tape measures are built was patented by a New Haven, Connecticut resident named Alvin J. Fellows on 14 July 1868. According to the text of his patent, Fellows' tape measure was an improvement on other versions previously designed.[1]

The spring tape measure has existed since Fellows' patent in 1868, but did not come into wide usage until the early 1900s, when it slowly began to supplant a common folding wooden design of carpenter's ruler.

With the mass production of the integrated circuit (IC) the tape measure has also entered into the digital age with the digital tape measure. Some incorporate a digital screen to give measurement readouts in multiple formats.

There are also other styles of tape measures that have incorporated lasers and ultrasonic technology to measure the distance of an object with fairly reliable accuracy. 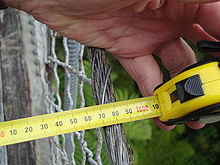 A roll-up tape measure being used.

Justus Roe & Sons began manufacturing steel tape measures in 1865. Located in Patchogue, Long Island, New York. His original concept was to place metal studs along lengths of wire. Justus Roe, a surveyor and tape-maker by trade, made the longest tape measure in 1956, at 600 feet long.[citation needed] The Northern Virginia Surveyors Association presented the 600' long, gold-plated surveyor's tape measure to Micky Mantle in 1956.[2] It now resides with other such memorabilia, behind glass in the entry area of Mickey Mantle's Steakhouse located in Oklahoma City, Oklahoma.[2]

Some tapes sold in the United States have additional marks in the shape of small black diamonds, which appear every 19.2 inches (490 mm). These are known as 'black truss' markings, and are used to mark out equal truss lengths for roofing materials (five trusses per standard 8 feet (2.4 m) length of building material).

Many tapes also have special markings every 16 inches, which is the standard interval for studs in housing.