This article is about the embroidery style called cross-stitch or counted cross-stitch. For specific crossed stitches used in needlework, see cross stitches. 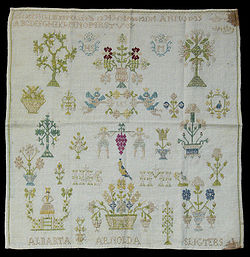 Fabrics used in cross-stitch include aida, linen and evenweave. Projects are categorized by stitches per inch, which can range from 14 to 40 count, and the appropriate fabric is then chosen.

Cross-stitch is one of the oldest forms of embroidery and can be found all over the world.[1] Many folk museums show examples of clothing decorated with cross-stitch, especially from continental Europe and Asia.

Two-dimensional (unshaded) cross-stitch in floral and geometric patterns, usually worked in black and red cotton floss on linen, is characteristic of folk embroidery in Eastern and Central Europe.[2]

In the United States, the earliest known cross-stitch sampler is currently housed at Pilgrim Hall in Plymouth, Massachusetts.[3] The sampler was created by Loara Standish, daughter of Captain Myles Standish and pioneer of the Leviathan stitch, circa 1653.

Multicoloured, shaded, painting-like patterns as we know them today are a recent development, deriving from similar shaded patterns of Berlin wool work of the mid-nineteenth century.

Traditionally, cross-stitch was used to embellish items like dishcloths, household linens, and doilies (only a small portion of which would actually be embroidered, such as a border). Although there are many cross-stitchers who still employ it in this fashion, especially in Europe, it is now increasingly popular to simply embroider pieces of fabric and hang them on the wall for decoration.

There are many cross-stitching "guilds" across the United States and Europe which offer classes, collaborate on large projects, stitch for charity, and provide other ways for local cross-stitchers to get to know one another.

Today cotton floss is the most common embroidery thread. It is a thread made of mercerized cotton, composed of six strands that are only loosely twisted together and easily separable. Other materials used are pearl cotton, Danish flower thread, silk and Rayon. Sometimes different wool threads, metallic threads or other specialty threads are used, sometimes for the whole work, sometimes for accents and embellishments. Hand dyed cross stitch floss is created just as the name implies - it is dyed by hand. Because of this, there are variations in the amount of color throughout the thread. Some variations can be subtle, while some can be a huge contrast. Some also have more than one color per thread, which in the right project, creates amazing results.

Related stitches and forms of embroidery 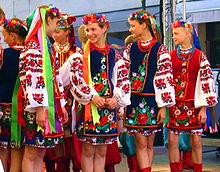 Other stitches are also often used in cross-stitch, among them ¼, ½, and ¾ stitches and backstitches.

Cross-stitch is often used together with other stitches. A cross stitch can come in a variety of prostational forms. It is sometimes used in crewel embroidery, especially in its more modern derivatives. It is also often used in needlepoint.

The double cross-stitch, also known as a Leviathan stitch or Smyrna cross stitch, combines a cross-stitch with an upright cross-stitch.

Recent trends in the UK

Cross-stitch has become increasingly popular with the younger generation of the United Kingdom in recent years[4]. The recession of post-2008 has also seen renewal of interest in home crafts. Retailers such as John Lewis experienced a 17% rise in sales of haberdashery products between 2009 and 2010[5]. Hobbycraft, a chain of stores selling craft supplies, also enjoyed an 11% increase in sales over the past year[6]. The chain is said[by whom?] to have benefited from the "make do and mend" mentality of the credit crisis, which has driven people to make their own cards and gifts.

Knitting and cross stitching have become more popular hobbies for a younger market, in contrast to its traditional reputation as a hobby for retirees[7]. Sewing and craft groups such as Stitch and Bitch London have resurrected the idea of the traditional craft club[8]. At Clothes Show Live 2010 there was a new area called "Sknitch" promoting modern sewing, knitting and embroidery[9].

In a departure from the traditional designs associated with cross stitch, there is a current trend for more postmodern or tongue-in-cheek designs featuring retro images or contemporary sayings[10]. It is linked to a concept known as 'subversive cross stitch', which involves more risque designs, often fusing the traditional sampler style with sayings designed to shock or be incongruous with the old-fashioned image of cross stitch.