Arts and crafts
This article is about the hobby. For other uses, see Arts & Crafts (disambiguation). 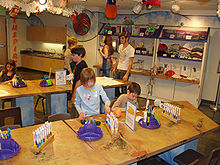 At the Buell Children's Museum in Pueblo, Colorado, children and their guardians partake in arts and crafts.

Arts and crafts comprise a whole host of activities and hobbies that are related to making things with one's hands and skill. These can be sub-divided into handicrafts or "traditional crafts" (doing things the old way) and "the rest". Some crafts have been practised for centuries, while others are modern inventions, or popularisations of crafts which were originally practised in a very small geographic area.

Most crafts require a combination of skill, speed, and patience, but they can also be learnt on a more basic level by virtually anyone. Many community centres and schools run evening or day classes and workshops offering to teach basic craft skills in a short period of time. Many of these crafts become extremely popular for brief periods of time (a few months, or a few years), spreading rapidly among the crafting population as everyone emulates the first examples, then their popularity wanes until a later resurgence.

Arts and crafts also refers to the Arts and Crafts Movement, a late 19th century design reform and social movement. Its proponents were motivated by the ideals of William Morris and John Ruskin, who proposed that in pre-industrial societies, such as the European Middle Ages, people had achieved fulfillment through the creative process of handicrafts. This was held up in contrast to what was perceived to be the alienating effects of industrial labour.

These activities are called crafts because originally many of them were professions under the guild system. Adolescents were apprenticed to a master-craftsman, and they refined their skills over a period of years in exchange for low wages. By the time their training was complete, they were well-equipped to set up in trade for themselves, earning their living with the skill that could be traded directly within the community, often for goods and services. The Industrial Revolution and the increasing mechanisation of production processes gradually reduced or eliminated many of the roles professional craftspeople played, and today "crafts" are most commonly seen as a form of hobby or art.

The term craft also refers to the products of artistic production or creation that require a high degree of tacit knowledge, are highly technical, require specialized equipment and/or facilities to produce, involve manual labour or a blue-collar work ethic, are accessible to the general public and are constructed from materials with histories that exceed the boundaries of western art history, such as ceramics, glass, textiles, metal and wood. These products are produced within a specific community of practice and while they differ from the products produced within the communities of art and design, the boundaries of such often overlap resulting in hybrid objects. Additionally, as the interpretation and validation of art is frequently a matter of context, an audience may perceive crafted objects as art objects when these objects are viewed within an art context, such as in a museum or in a position of prominence in one's home.

The term can also refer to the useful rural crafts of the agricultural countryside. Craftsmanship refers to Plato's idea of specialization, in which the lower society has a specific job in the greater society so that it functions properly as a whole.

Types of arts and crafts

There are almost as many variations on the theme of "arts and crafts" as there are crafters with time on their hands, but they can be broken down into a number of categories: