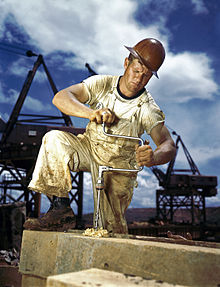 Carpenter at work in Tennessee, June 1942 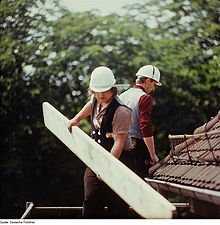 A carpenter (builder) is a skilled craftsperson who works with timber to construct, install and maintain buildings, furniture, and other objects. The work, known as carpentry, may involve manual labor and work outdoors.[1]

Carpentry skill is gained through experience and study. In some countries (such as the United States), there are no formal training requirements other than in trade unions, and the trade can be easy to enter. In other countries (such as Germany, Japan and Canada) there are strict standards.

The word "carpenter" is the English rendering of the Old French word carpentier (become charpentier) which is derived from the Latin carpentrius [artifex], "(maker) of a carriage.[2] The Middle English and Scots word (in the sense of "builder") was wright (from the Old English wryhta), which could be used in compound forms such as wheelwright or boatwright.[3] In British slang, a carpenter is sometimes referred to as a "chippy".

Carpentry in the United States is almost always done by men. With 98.5% of carpenters being male, it was the fourth most male-dominated occupation in the country in 1999.[4]

A finish carpenter (North America) also called a joiner (traditional name now obselete in North America) is one who does finish carpentry; that is, cabinetry, furniture making, fine woodworking, model building, instrument making, parquetry, joinery, or other carpentry where exact joints and minimal margins of error are important. Some large-scale construction may be of an exactitude and artistry that it is classed as finish carpentry. 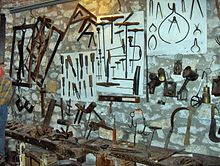 A trim carpenter specializes in molding and trim, such as door and window casings, mantels, baseboard, and other types of ornamental work. Cabinet installers may also be referred to as trim carpenters.

A cabinetmaker is a carpenter who does fine and detailed work specializing in the making of cabinets made from wood, wardrobes, dressers, storage chests, and other furniture designed for storage.

A ship's carpenter specializes in shipbuilding, maintenance, and repair techniques (see also shipwright) and carpentry specific to nautical needs; usually the term refers to a carpenter who has a post on a specific ship. Steel warships as well as wooden ones need ship's carpenters, especially for making emergency repairs in the case of battle or storm damage.

A scenic carpenter in filmmaking, television, and the theater builds and dismantles temporary scenery and sets.

A framer is a carpenter that builds the skeletal structure or framework of buildings. Techniques include platform framing, balloon framing, or timber framing (which may be post-and-beam or mortise-and-tenon framing). 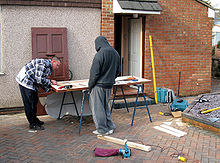 A luthier is someone who makes or repairs stringed instruments. The word luthier comes from the French word for lute, "luth".

A formwork carpenter creates the shuttering and falsework used in concrete construction.

In Japan, Miya-daiku (Temple carpenter) performs the works of both architect and builder of shrine and temple.

Green carpentry is the specialization in the use of environmentally friendly,energy-efficient and sustainable sources of building materials to use in construction projects.[5] 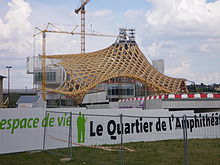 The Centre Pompidou-Metz museum under construction in Metz, France in 2009. The building possesses one of the most complex carpentry build to date and is composed of 16 kilometers of glued laminated timber for a surface area of 8,000 m². 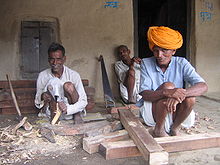 Carpenters in an Indian village

Tradesmen in countries such as Germany are required to fulfil a formal apprenticeship (usually three years) to work as a professional carpenter. Upon graduation from the apprenticeship, he or she is known as a journeyman carpenter. Up through the 19th and even the early 20th century, the journeyman traveled to another region of the country to learn the building styles and techniques of that area before (usually) returning home. In modern times, journeymen are not required to travel, and the term refers more to a level of proficiency and skill. Union carpenters in the United States - United Brotherhood of Carpenters and Joiners of America - are required to pass a skills test to be granted official journeyman status, but uncertified professional carpenters may be known as journeymen based on their skill level, years of experience, or simply because they support themselves in the trade, and not due to certification or formal woodworking education.

After working as a journeyman for a period, a carpenter may go to study or test as a master carpenter. In some countries, such as Germany or Japan, this is an arduous and expensive process, requiring extensive knowledge (including economic and legal knowledge) and skill to achieve master certification; these countries generally require master status for anyone employing and teaching apprentices in the craft. In others, it can be a loosely used term to describe a skilled carpenter.

In Canada, each province sets its own standards for apprenticeship. The average length of time is four years and includes a minimum number of hours of both on the job training and technical instruction at a college or other institution. Depending on the number of hours of instruction an apprentice receives, he or she can earn a Certificate of Proficiency, making them a journeyman, or a Certificate of Qualification, which allows them to practice a more limited amount of carpentry. Canadian carpenters also have the option of acquiring an additional Interprovincial Red Seal [1] that allows them to practice anywhere in Canada. The Red Seal requires the completion of an apprenticeship and an additional examination.

In the modern British construction industry, carpenters are trained through apprenticeship schemes where GCSEs in Mathematics, English and Technology help, but are not essential. This is deemed as the preferred route as young people can earn and gain field experience whilst training towards a nationally recognized qualification.