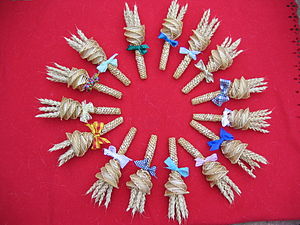 Corn dollies or corn mothers are a form of straw work made as part of harvest customs of Europe before mechanization.

Before Christianisation, in traditional pagan European culture it was believed that the spirit of the corn (in modern American, "corn" would be "grain") lived amongst the crop, and that the harvest made it effectively homeless. James Frazer devotes chapters in The Golden Bough to "Corn-Mother and Corn-Maiden in Northern Europe" (chs. 45-48) and adduces European folkloric examples collected in great abundance by the folklorist Wilhelm Mannhardt. Among the customs attached to the last sheaf of the harvest were hollow shapes fashioned from the last sheaf of wheat or other cereal crops. The corn spirit would then spend the winter in this home until the "corn dolly" was ploughed into the first furrow of the new season. "Dolly" may be a corruption of "idol" or may have come directly from the Greek word eidolon, that which represents something else.

James George Frazer discusses the Corn-mother and the Corn-maiden in Northern Europe, and the harvest rituals that were being practised at the beginning of the 20th century: 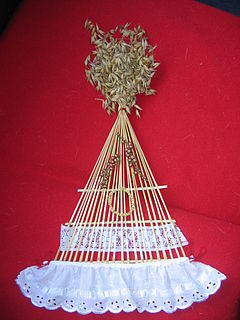 "In the neighbourhood of Danzig the person who cuts the last ears of corn makes them into a doll, which is called the Corn-mother or the Old Woman and is brought home on the last waggon. In some parts of Holstein the last sheaf is dressed in women's clothes and called the Corn-mother. It is carried home on the last waggon, and then thoroughly drenched with water. The drenching with water is doubtless a rain-charm. In the district of Bruck in Styria the last sheaf, called the Corn-mother, is made up into the shape of a woman by the oldest married woman in the village, of an age from 50 to 55 years. The finest ears are plucked out of it and made into a wreath, which, twined with flowers, is carried on her head by the prettiest girl of the village to the farmer or squire, while the Corn-mother is laid down in the barn to keep off the mice. In other villages of the same district the Corn-mother, at the close of harvest, is carried by two lads at the top of a pole. They march behind the girl who wears the wreath to the squire's house, and while he receives the wreath and hangs it up in the hall, the Corn-mother is placed on the top of a pile of wood, where she is the centre of the harvest supper and dance."
—The Golden Bough, chapter 45

Many more customs are instanced by Frazer (see link).

"In East Prussia, at the rye or wheat harvest, the reapers call out to the woman who binds the last sheaf, “You are getting the Old Grandmother....In Scotland, when the last corn was cut after Hallowmas, the female figure made out of it was sometimes called the Carlin or Carline, that is, the Old Woman."[1] The name the "Old Woman" (Latin vetula) for such "corn dolls" was in use among the Germanic pagans of Flanders in the 7th century, where Saint Eligius had to warn them to desist from their old practices:"[Do not] make vetulas, (little figures of the Old Woman), little deer or iotticos or set tables [for the house-elf, compare Puck] at night or exchange New Year gifts or supply superfluous drinks [a Yule custom]."[2]

With the advent of the combine harvester, the old-fashioned, long-stemmed and hollow-stemmed wheat varieties were replaced with knee-high, pithy varieties. However, a number of English and Scottish farmers are still growing the traditional varieties of wheat, such as Maris Wigeon, Squarehead Master, Elite Le Peuple.[3] mainly because they are in great demand in thatching, a craft which is enjoying a renaissance, with customers facing long waiting lists for having their roofs thatched or repaired.

Corn Dollies and other similar harvest straw work can be divided into these groups:

Countryman's favours and other harvest designs

A countryman's favour was usually a plait of three straws and tied into a loose knot to represent a heart. It is reputed to have been made by a young man with straws picked up after the harvest and given to his loved one. If she was wearing it next to her heart when he saw her again then he would know that his love was reciprocated. Three straws can be plaited using the hair plait or a cat's foot plait. Favours can be made with two, three, four or more straws. 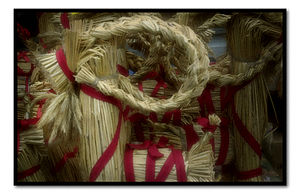 These are representations of deities, animals or spirits, made from an entire sheaf. They are known by a variety of names, depending on location and also the time of harvesting:

Here the straw is not plaited, but tied with yarn, wool, raffia or similar. This type of straw work is particularly popular in Scandinavia and German-speaking countries. Examples of these are the Oro (Swedish Straw Crown); the Tomte or Nisse (Yule dwarfs); and smaller versions of the Yule Goat.