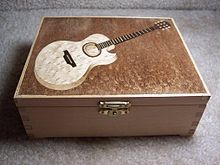 The image on the cover of this box was made using the technique of marquetry. 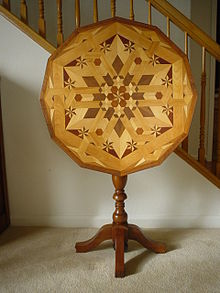 In contrast, this Tilt-top table is veneered in a parquetry pattern by Isaac Leonard Wise, circa 1934. 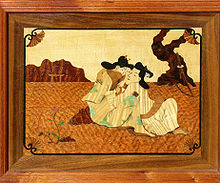 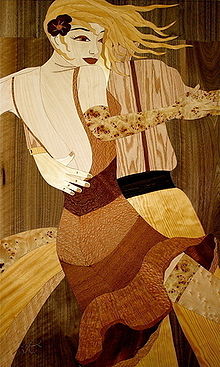 An example Marquetry as fine art by Allashka. 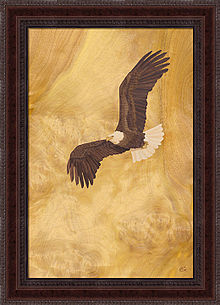 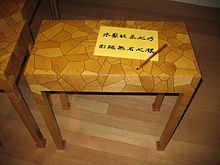 Modern marquetry: a tangram table by Silas Kopf, with trompe l'oeil images of paper and pencil made entirely of different shades of flat veneer

Marquetry (also spelled as marqueterie) is the art and craft of applying pieces of veneer to a structure to form decorative patterns, designs or pictures. The technique may be applied to case furniture or even seat furniture, to decorative small objects with smooth, veneerable surfaces or to free-standing pictorial panels appreciated in their own right. Parquetry is very similar in technique to marquetry: in parquetry the pieces of veneer are of simple repeating geometric shapes, forming tiling patterns such as would cover a floor (parquet), or forming basketweave or brickwork patterns, trelliswork and the like.

Marquetry (and parquetry too) differs from the more ancient craft of inlay, in which a solid body of one material is cut out to receive sections of another to form the surface pattern. The word derives from a Middle French word meaning "inlaid work".

The veneers used are primarily woods, but may include bone, ivory, turtle-shell (conventionally called "tortoiseshell"), mother-of-pearl, pewter, brass or fine metals. Marquetry using colored straw was a specialty of some European spa resorts from the end of the 18th century. Many exotic woods as well as common European varieties can be employed, from the near-white of boxwood[1] to the near-black of ebony, with veneers that retain stains well, like sycamore, dyed to provide colors not found in nature.

The simplest kind of marquetry uses only two sheets of veneer, which are temporarily glued together and cut with a fine saw, producing two contrasting panels of identical design, (in French called partie and contre-partie, "part" and "counterpart").

Marquetry as a modern craft most commonly uses knife-cut veneers. However, the knife-cutting technique usually requires a lot of time. For that reason, many marquetarians have switched to fret or scroll saw techniques. Other requirements are a pattern of some kind, some brown gummed tape (IE as the moistened glue dries it causes the tape to shrink and so the veneer pieces are pulled closer together), PVA glue and a base-board with balancing veneers on the alternate face to compensate stresses. Finishing the piece will require sand-paper or wire wool, possibly with a sanding block. Either ordinary varnish, special varnishes, modern polyurethane -oil or water based- good waxes and even the technique of french polish are different methods used to seal and finish the piece.

Sand shading is a process used to make a picture appear to be more three-dimensional. A piece of veneer to be incorporated into a picture is partially submerged into hot sand for a few seconds.

Another process is engraving fine lines into a picture and filling them with a mixture of India Ink and Shellac.

The technique of veneered marquetry had its inspiration in 16th century Florence (and at Naples). Marquetry elaborated upon Florentine techniques of inlaying solid marble slabs with designs formed of fitted marbles, jaspers and semi-precious stones. This work, called opere di commessi, has medieval parallels in Central Italian "Cosmati"-work of inlaid marble floors, altars and columns. The technique is known in English as pietra dura, for the "hardstones" used: onyx, jasper, cornelian, lapis lazuli and colored marbles. In Florence, the Chapel of the Medici at San Lorenzo is completely covered in a colored marble facing using this demanding jig-sawn technique.

Techniques of wood marquetry were developed in Antwerp and other Flemish centers of luxury cabinet-making during the early 16th century. The craft was imported full-blown to France after the mid-seventeenth century, to create furniture of unprecedented luxury being made at the royal manufactory of the Gobelins, charged with providing furnishings to decorate Versailles and the other royal residences of Louis XIV. Early masters of French marquetry were the Fleming Pierre Golle and his son-in-law, André-Charles Boulle, who founded a dynasty of royal and Parisian cabinet-makers (ébénistes) and gave his name to a technique of marquetry employing tortoiseshell and brass with pewter in arabesque or intricately foliate designs. Boulle marquetry dropped out of favor in the 1720s, but was revived in the 1780s. In the decades between, carefully matched quarter-sawn veneers sawn from the same piece of timber were arranged symmetrically on case pieces and contrasted with gilt-bronze mounts. Floral marquetry came into favor in Parisian furniture in the 1750s, employed by cabinet-makers like Bernard van Risenbergh, Jean-Pierre Latz and Simon-François Oeben. The most famous royal French furniture veneered with marquetry are the pieces delivered by Jean Henri Riesener in the 1770s and 1780s. The Bureau du Roi was the most famous amongst these famous masterpieces.

Marquetry was not ordinarily a feature of furniture made outside large urban centers. Nevertheless, marquetry was introduced into London furniture at the Restoration of Charles II in 1660, the product of immigrant Dutch 'inlayers', whose craft traditions owed a lot to Antwerp. Panels of elaborately scrolling "seaweed" marquetry of box or holly contrasting with walnut appeared on table tops, cabinets, and long-case clocks. At the end of the 17th century, a new influx of French Huguenot craftsmen went to London, but marquetry in England had little appeal in the anti-French, more Chinese-inspired high-style English furniture (mis-called 'Queen Anne') after ca 1720. Marquetry was revived as a vehicle of Neoclassicism and a 'French taste' in London furniture, starting in the late 1760s. Cabinet-makers associated with London-made marquetry furniture, 1765–1790, include Thomas Chippendale and less familiar names, like John Linnell, the French craftsman Pierre Langlois, and the firm of William Ince and John Mayhew.

Although marquetry is a technique separate from inlay, English marquetry-makers were called "inlayers" throughout the 18th century. In Paris, before 1789, makers of veneered or marquetry furniture (ébénistes) belonged to a separate guild from chair-makers and other furniture craftsmen working in solid wood (menuisiers).

Tiling patterning has been more highly developed in the Islamic world than anywhere else, and many extraordinary examples of inlay work have come from Middle Eastern countries such as Lebanon and Iran.

At Tonbridge and Royal Tunbridge Wells, England, souvenir "Tunbridge wares"— small boxes and the like— made from the mid-18th century onwards, were veneered with panels of minute wood mosaics, usually geometric, but which could include complicated subjects like landscapes. They were made by laboriously assembling and gluing thin strips and shaped rods, which then could be sliced crossways to provide numerous mosaic panels all of the same design.

Marquetry was a feature of some centers of German cabinet-making from ca 1710. The craft and artistry of David Roentgen, Neuwied, (and later at Paris as well) was unsurpassed, even in Paris, by any 18th Century marquetry craftsman.

Marquetry was not a mainstream fashion in 18th-century Italy, but the neoclassical marquetry of Giuseppe Maggiolini, made in Milan at the end of the century is notable.

The classic illustrated description of 18th century marquetry-making was contributed by Roubo to the Encyclopédie des Arts et Métiers, 1770. The most thorough and dependable 20th century accounts of marquetry, in the context of Parisian cabinet-making, are by Pierre Verlet.

During the 80's Georges Vriz developed a new technique called piercing. The idea is to layer to veneer on top of each other and sand through the top layer up to the point of fiber transparency. This technique as been mainly used in France by professionals and by students from the Ecole Boulle. In the US the technique as been used at the American School of French Marquetry by one of the teacher, the Marquetry artist Patrice Lejeune. The school staff is also proposing a new name for this technique : "Piercing is an unfortunate mistake in the veneering world, for this reason we chose to use the word "Fusion" instead. By this term "Fusion" the artist shows his intention of sanding through the veneer as a decorative and textural effect and not as a mistake."

Patrice Lejeune also use at the american School of French Marquetry a technique he called "sprinkling". Patrice Lejeune use his wastes (sawdust, shavings, scrapings...) as pigment creating a range of diverse effects. This is arguably no more marquetry but more in the veneering or painting area, but as a by-product of modern marquetry making we decided to include it in this thread. This technique of using sawdust and shavings as pigment was also invented by Georges Vriz who exhibited in Paris at the Ecole de la Bonne Graine in 1996 a series of large panels using this technique.

It is possible, in marquetry, to achieve realism without the use of the special techniques mentioned above. The Bald Eagle, to the right, is an example of how realism is achieved with natural wood veneers in their natural colors and textures.

In the range of new techniques we can include the laser cutting. The marquetry design is drawn or imported as a CAD file and each pieces is cut separately by the machine. Each wood by its species and thickness may need a specific adjustment of the beams' power. The offset will determine the gap between the pieces and in some case the beam will leave a dark edge due to the extreme heat required by the process.