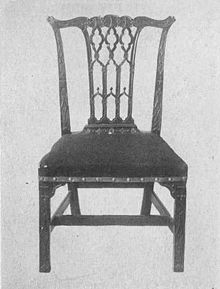 A provincial Chippendale-style chair with elaborate "Gothick" tracery splat back

Thomas Chippendale (probably born at Farnley near Otley, baptised at Otley 16 June [O.S. 5 June] 1718 - November 1779) [1] was a London cabinet-maker and furniture designer in the mid-Georgian, English Rococo, and Neoclassical styles. In 1754 he published a book of his designs, titled The Gentleman and Cabinet Maker's Director. The designs are regarded as establishing the fashion for furniture for that period and were used by many other cabinet makers. 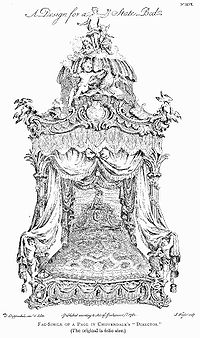 He was the only child of John Chippendale (1690–1768), joiner, and his first wife Mary (née Drake) (1693–1729). He received an elementary education at Prince Henry's Grammar School. The Chippendale family had long been the wood working trades and so he probably received his basic training from his father, though it is believed that he also was trained by Richard Wood in York, before he moved to London.[2] Wood later ordered eight copies of the Director. On 19 May 1748 he married Catherine Redshaw at St George's Chapel, Mayfair and they had five boys and four girls.

In 1749 Chippendale rented a modest house in Conduit Court, near Covent Garden. In 1752 he moved to Somerset Court, off the Strand. In 1754 Chippendale moved to 60–62 St. Martin's Lane in London, where for the next 60 years the family business operated until 1813 when his son, Thomas Chippendale (Junior), was evicted for bankruptcy. In 1754 he also went into partnership with James Rannie, a wealthy Scottish merchant, who put money into the business at the same time as Chippendale brought out the first edition of the Director. Rannie and his bookkeeper, Thomas Haig, probably looked after the finances of the business. His wife, Catherine, died in 1772. After James Rannie died in 1766, Thomas Haig seems to have borrowed £2,000 from his Rannie's widow, which he used to become Chippendale’s partner. One of Rannie's executors, Henry Ferguson, became a third partner and so the business became Chippendale, Haig and Co. Thomas Chippendale (Junior) took over the business in 1776 allowing his father to retire. He moved to what was then called Lob's Fields (now known as Derry Street) in Kensington. Chippendale married Elizabeth Davis at Fulham Parish Church on 5 August 1777. He fathered three more children. In 1779 Chippendale moved to Hoxton where he died of tuberculosis and was buried at St Martin-in-the-Fields on 13 November 1779.

There is a statue and memorial plaque dedicated to Chippendale outside the old Prince Henry's Grammar School in Manor Square, in his home town of Otley, near Leeds, Yorkshire. There is a full-size sculpted figure of Thomas Chippendale on the façade of the Victoria and Albert Museum, London. 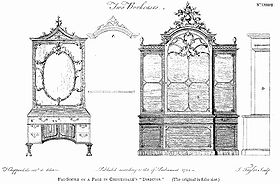 After working as a journeyman cabinet maker in London, in 1754, he became the first cabinet-maker to publish a book of his designs, titled The Gentleman and Cabinet Maker's Director. Three editions were published, the first in 1754, followed by a virtual reprint in 1755, and finally a revised and enlarged edition in 1762, by which time Chippendale's illustrated designs began to show signs of Neoclassicism.

Chippendale was much more than just a cabinet maker, he was an interior designer who advised on soft furnishings and even the colour a room should be painted. Chippendale often took on large-scale commissions from aristocratic clients. Twenty-six of these commissions have been identified.[3] Here furniture by Chippendale can still be identified, The locations include: 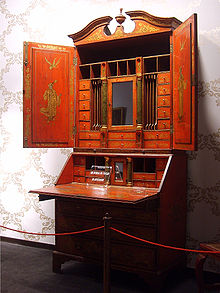 His Director was used by many other cabinet makers. Consequently recognisably "Chippendale" furniture was produced in Dublin, Philadelphia, Lisbon, Copenhagen and Hamburg. Catherine the Great and Louis XVI both possessed copies of the Director in its French edition.[4]

The Director shows four main styles: English with deep carving, elaborate French rococo in the style of Louis XV furniture, Chinese style with latticework and lacquer, and Gothic with pointed arches, quatrefoils and fret-worked legs. His favourite wood was mahogany; in seat furniture he always used solid wood rather than veneers.

His workshop was continued by his son, Thomas Chippendale, the younger (1749–1822), who worked in the later Neoclassical and Regency styles, "the rather slick delicacy of Adam's final phase", as Christopher Gilbert assessed it.[5] A bankruptcy and sale of remaining stock in the St. Martin's Lane premises in 1804 did not conclude the firm's latest phase, as the younger Chippendale supplied furniture to Sir Richard Colt Hoare at Stourhead until 1820 (Edwards and Jourdain 1955: 88).

His designs became very popular again during the middle to late 19th century, leading to widespread adoption of his name in revivals of his style. Many of these later designs that attach his name bear little relationship to his original concepts.