A splitting maul also known as a block buster, or block splitter is a heavy, long-handled hammer used for splitting a piece of wood along its grain. One side of its head is like a sledgehammer, and the other side is like an axe.

A typical maul for wood splitting will have a head weighing in region of 4 kg (8 lbs). Traditionally, mauls have a wedge-shaped head, but some modern versions have conical heads or swiveling sub-wedges.

The original maul resembles an axe but with a broader head. For splitting wood, this tool is much better than a typical axe. The weight of it is more advantageous and due to its width, it is less likely to become stuck in the wood. The wedge section of a maul head must be slightly convex to avoid jamming and it cannot have the elongated "hollow ground" concave-section that a cutting axe may use.

Unlike an axe, maul handles are normally straight and closer to round than the elongated oval axe handles tend to be. A maul's handle, unlike an axe, is intentionally used for levering as well as swinging. The handles are typically made from hickory, though synthetic fibreglass handles have become common. Plastic handles are more difficult to break and their factory-attached heads are less likely to work free with the levering action of a maul. In the early 1970s a triangular head design with an unbreakable metal handle was introduced called the "Monster Maul."

Splitting may also be done with a separate wedge and a large hammer. As this allows several wedges to be used together, it permits larger logs to be split.

To avoid mushrooming the head of the wedge, they are driven with a heavy wooden mallet rather than an iron hammer. In parts of England the word "maul" denotes this tool with a very heavy wooden head. It is also known as a beetle; there is a well known pub on the River Thames at Moulsford called the Beetle and Wedge.

Hydraulic log splitters are commonly used today. They can be either horizontal or vertical as shown here. 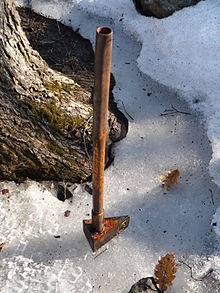 The maul is most commonly struck onto a flush-cut section of log, usually standing on end atop a splitting stump or other suitable base. Most cut sections can be split in a single downward chop of the maul, splitting the wood apart along its grain. Mauls regularly become stuck in the log for several reasons, such as the wood not being struck with adequate force, the wood containing hidden knots, or the length of wood being too long. Unlike an axe, mauls are effective longer after the edge dulls, as the primary mechanism is that of a wedge pushed through along the wood grain, and not a cross-grain chop of an axe. In some cases, longer logs may be split while they rest length-wise on the base or ground. Mauls often become stuck in logs mid-split requiring a "full-lift" chop to be used. This involves the chopper reswinging the maul, but this time lifting the half-split log while still attached to the embedded maul, often requiring one or two additional full-lift chops. Another technique for splitting upright logs of thicker diameter is to land the maul's full force off-center of the log, usually removing 1/4 of the mass of the log. When repeated, large logs that would ordinarily cause the maul to be embedded on a center-strike can be handled easily. Additionally, as the temperature gets colder, the fibers in the log become more brittle making the logs easier to split. 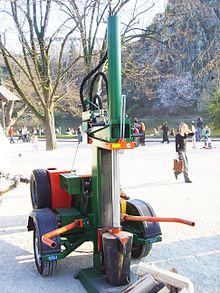 The hammer side of the maul is often used in wood splitting when combined with a splitting wedge, driving the wedge into the wood in the same fashion as the maul itself. This is generally used when attempting to split logs with a large diameter. Modern mauls are made of a strong enough steel to withstand the metal-to-metal contact without chipping. However, it is still common for the wedge itself to chip off. This can be dangerous as flying chips of steel could damage the eye. This is also the easiest way to break a maul's handle because the wedge is a very small target as opposed to the whole log, and can be overshot, resulting in the handle hitting full-force onto the wedge. This greatly weakens the handle, and can cause it to break after only a few over-shots.

Harder seasoned logs which have dried sufficiently often split apart with enough force that each half tumbles away at some speed, which is a hazard for people or objects nearby.

A common danger for inexperienced splitters is to miss the upright log entirely or give it only a glancing blow. If the maul lands beyond the log, the maul handle may either bounce or break. If the maul lands in front of the log, it may hit the feet of the splitter if they are in a closed stance. If the maul hits the side of the log without biting in, the maul commonly will bounce to one side and to the ground. In this situation, even a widened stance may still leave the splitter's feet vulnerable.

When performing the "full-lift" chop described above, the splitter must never raise the maul and log above his head.

Generally speaking, a maul should never swing to the side. Rather it should be powered through the drop, using force to assist the natural weight of the maul. In addition a suitable splitting base is one of the most important components to splitting wood with a maul. Wood can be split directly off the ground, although this is a disadvantage for a few reasons. For one the ground, if not frozen, will give on each blow, thereby weakening the overall effect of the blow. The second disadvantage is that it can present the log to be split at a low level, forcing the person splitting the wood to bend over during the swing, which causes back fatigue. The best bases are a flush-cut segments of logs, usually about one foot tall, and made of hard wood. For repeated season use the top open grain may be treated slightly. The diameter should be at least 100 per cent larger than that of the diameter of the wood placed atop it for splitting, and the base should be placed on firm ground.