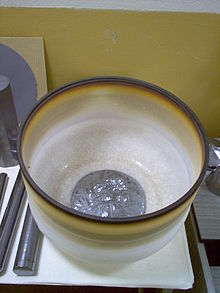 A crucible is a container used for metal, glass, and pigment production as well as a number of modern laboratory processes, which can withstand temperatures high enough to melt or otherwise alter its contents. Historically, they have usually been made of clay [1], but they can be made of any material with a higher temperature resistance than the substances they are designed to hold.

The form of the crucibles has varied through time, with designs reflecting the process for which they are used, as well as regional variation. The earliest crucible forms derive from the sixth/fifth millennium B.C. in Eastern Europe and Iran [2].

Crucibles used for copper smelting were generally wide shallow vessels made from clay that lacks refractory properties which is similar to the types of clay used in other ceramics of the time [3]. During the Chalcolithic period, crucibles were heated from the top by using blow pipes[4]. Ceramic crucibles from this time had slight modifications to their designs such as handles, knobs or pouring spouts (Bayley & Rehren 2007: p47) allowing them to be more easily handled and poured. Early examples of this practice can be seen in Feinan, Jordan[5]. These crucibles have added handles to allow for better manipulation, however due to the poor preservation of the crucibles there is no evidence of a pouring spout. The main purpose of the crucible during this period was to keep the ore in the area where the heat was concentrated to separate it from impurities before shaping[6].

The use of crucibles in the Iron Age remains very similar to that of the Bronze Age with copper and tin smelting was being used to produce bronze. The Iron Age crucible designs remain the same as the Bronze Age.

The Roman period shows technical innovations, with crucibles for new methods used to produce new alloys. The smelting and melting process also changed with both the heating technique and the crucible design. The crucible changed into rounded or pointed bottom vessels with a more conical shape; these were heated from below, unlike prehistoric types which were irregular in shape and were heated from above. These designs gave greater stability within the charcoal (Bayley & Rehren 2007: p49). These crucibles in some cases have thinner walls and have more refractory properties (Tylecote 1976: p20).

During the Roman period a new process of metalworking started, cementation, used in the production of brass. This process involves the combination of a metal and a gas to produce an alloy (Zwicker et al. 1985: p107). Brass is made by mixing solid copper metal in with zinc oxide or carbonate which comes in the form of calamine or smithsonite (Rehren 2003: p209). This is heated to about 900°C and the zinc oxide vaporises into a gas and the zinc gas bonds with the solid copper (Rehren 1999: p1085). This reaction has to take place in a part-closed or closed container otherwise the zinc vapour would escape before it can react with the copper. Cementation crucibles therefore have a lid or cap which limits the amount of gas loss from the crucible. The crucible design is similar to the smelting and melting crucibles of the period utilizing the same material as the smelting and melting crucibles. The conical shape and small mouth allowed the lid to be added. These small crucibles are seen in Colonia Ulpia Trajana (modern day Xanten), Germany, where the crucibles are around 4 cm in size however these are small examples [7]. There are examples of larger vessels such as cooking pots and amphorae being used for cementation to process larger amounts of brass; since the reaction takes place at low temperatures lower fired ceramics could be used [8]. The ceramic vessels which are used are important as the vessel must be able to lose gas through the walls otherwise the pressure would break the vessel. Cementation vessels are mass produced due to crucibles having to be broken open to remove the brass once the reaction has finished as in most cases the lid would have baked hard to the vessel or the brass might have adhered to the vessel walls.

Smelting and melting of copper and it alloys such as leaded bronze were smelted in crucibles similar to those of the roman period which have thinner walls and flat bases to sit within the furnaces. The technology for this type of smelting started to change at the end of the Medieval period with the introduction of new tempering material for the ceramic crucibles. Some of these copper alloy crucibles were used in the making of bells. Bell foundry crucibles had to be larger at about 60 cm (Tylecote 1976: p73). These later medieval crucibles were a more mass produced product.

The cementation process, which was lost from the end of the Roman to the early Medieval period, continued in the same way with brass. Brass production increased during the medieval period due to a better understanding of the technology behind it. Furthermore, the process for carrying out cementation for brass did not change greatly until the 19th century[9]. However, during this period a vast and highly important technological innovation happened using the cementation process, the production of steel. Steel production using iron and carbon works in the same way as brass with the iron metal being mixed with carbon to produce steel. The first examples of cementation steel is wootz steel from India (Craddock 1995: p276), where the crucibles were filled with the good quality wrought iron and carbon in the form of organics such as leaves, wood etc. However, no charcoal was used within the crucible. These early crucibles would only produce a little amount of steel and would have to be broken once the process has finished.

By the late Medieval period steel production had move from India to modern day Uzbekistan where new materials were being used in the production of steel crucibles, for example Mullite crucibles were introduced [10]. These were sandy clay crucibles which had been formed around a fabric tube [11]. These crucibles are used in the same way as other cementation vessels but with a hole in the top of the vessel to allow pressure to escape.

At the end of the Medieval and into the Post Medieval new types of crucible designs and processes started. Smelting and melting crucibles types started to become more limited in designs which are produced by a few specialists. The main types used during the Post Medieval period are the Hessian Crucibles which were made in the Hesse region in Germany. These are triangular vessels made on a wheel or within a mould using high alumina clay and tempered with pure quartz sand [12]. Furthermore another specialised crucible which was made at the same time was that of a graphite crucible from southern Germany. These had a very similar design to that of the triangular crucibles from Hesse but they also occur in conical forms. These crucibles were traded all across Europe and the New World.

The refining of methods during the Medieval and Post Medieval periods led to the invention of the cupel which resembles a small egg cup, made of ceramic or bone ash which was used to separate base metals from noble metals. This process is known as cupellation. Cupellation started long before the Post Medieval period, however the first vessels made to carry out this process started in the 16th Century (Rehren 2003: p208). Another vessel used for the same process is a scorifier which is similar to a cupel but slightly larger and removes the lead and leaves the noble metals behind. Cupels and scorifiers were mass produced as after each reduction the vessels would have absorbed all of the lead and become fully saturated. These vessels were also used in the process of assaying where the noble metals are removed from a coin or a weight of metal to determine the amount of the noble metals within the object.

A crucible is a cup-shaped piece of laboratory equipment used to contain chemical compounds when heated to extremely high temperatures. Crucibles are available in several sizes and typically come with a correspondingly-sized crucible cover (or lid).

Crucibles and their covers are made of high temperature-resistant materials, usually porcelain or an inert metal. One of the earliest uses of platinum was to make crucibles. Ceramics such as alumina, zirconia, and especially magnesia will tolerate the highest temperatures. More recently, metals such as nickel and zirconium have been used. The lids are typically loose-fitting to allow gases to escape during heating of a sample inside. Crucibles and their lids can come in high form and low form shapes and in various sizes, but rather small 10–15 ml size porcelain crucibles are commonly used for gravimetric chemical analysis. These small size crucibles and their covers made of porcelain are quite cheap when sold in quantity to laboratories, and the crucibles are sometimes disposed of after use in precise quantitative chemical analysis. There is usually a large mark-up when they are sold individually in hobby shops. 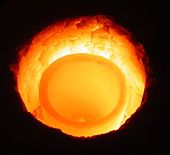 Melting gold in a graphite crucible

Use in chemical analysis

In the area of chemical analysis, crucibles are used in quantitative gravimetric chemical analysis (analysis by measuring mass of an analyte or its derivative). Common crucible use may be as follows. A residue or precipitate in a chemical analysis method can be collected or filtered from some sample or solution on special "ashless" filter paper. The crucible and lid to be used are pre-weighed very accurately on an analytical balance. After some possible washing and/or pre-drying of this filtrate, the residue on the filter paper can be placed in the crucible and fired (heated at very high temperature) until all the volatiles and moisture are driven out of the sample residue in the crucible. The "ashless" filter paper is completely burned up in this process. The crucible with the sample and lid is allowed to cool in a desiccator. The crucible and lid with the sample inside is weighed very accurately again only after it has completely cooled to room temperature (higher temperature would cause air currents around the balance giving inaccurate results). The mass of the empty, pre-weighed crucible and lid is subtracted from this result to yield the mass of the completely dried residue in the crucible.

A crucible with a bottom perforated with small holes which is designed specifically for use in filtration, especially for gravimetric analysis as just described, is called a Gooch crucible after its inventor, Frank Austen Gooch.

For completely accurate results, the crucible is handled with clean tongs because fingerprints can add weighable mass to the crucible. Porcelain crucibles are hygroscopic, i. e. they absorb a bit of weighable moisture from the air. For this reason, the porcelain crucible and lid is also pre-fired (pre-heating to high temperature) to constant mass before the pre-weighing. This determines the mass of the completely dry crucible and lid. At least two firings, coolings, and weighings resulting in exactly the same mass are needed to confirm constant (completely dry) mass of the crucible and lid and similarly again for the crucible, lid, and sample residue inside. Since the mass of every crucible and lid is different, the pre-firing/pre-weighing must be done for every new crucible/lid used. The desiccator contains desiccant to absorb moisture from the air inside, so the air inside will be completely dry.

Ash is the completely unburnable inorganic salts in a sample. A crucible can be similarly used to determine the percentage of ash contained in an otherwise burnable sample of material such as coal, wood, or oil. A crucible and its lid are pre-weighed at constant mass as described above. The sample is added to the completely dry crucible and lid and together they are weighed to determine the mass of the sample by difference.