Snuff is a product made from ground or pulverised tobacco leaves. It is an example of smokeless tobacco. It originated in the Americas and was in common use in Europe by the 17th century. In recent years because of the ban on smoking in pubs in most European Union countries, the practice of snuff taking has increased somewhat.[1]

It is generally insufflated (inhaled) or "snuffed" through the nose either directly from the fingers or by using specially made "snuffing" devices.

In the English speaking world it traditionally refers to dry, fine, nasal snuff; however in Scandinavia it more often refers to snus which is moist and somewhat coarse. Scandinavian snus is applied to the gums in the mouth. In the United States and Canada, "snuff" can also refer to dipping tobacco, which is applied to the gums behind the bottom lip rather than insufflated. 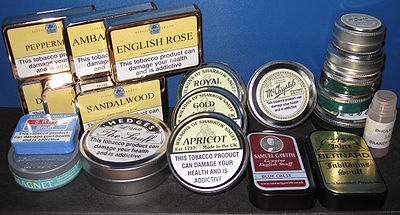 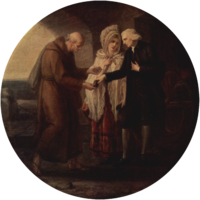 The Monk of Calais (1780) by Angelica Kauffmann, depicting Pastor Yorick exchanging snuffboxes with Father Lorenzo "..having a horn snuff box in his hand, he presented it open to me.--You shall taste mine--said I, pulling out my box and putting it into his hand." From Laurence Sterne's A Sentimental Journey.

Snuff taking by the native peoples of modern-day Haiti was observed by a spanish monk named Ramon Pane on Columbus' second journey to the Americas during 1493-1496. [2]

In 1561 Jean Nicot, the French ambassador in Lisbon, Portugal, sent snuff to Catherine de' Medici to treat her son's persistent migraines.[3] Her belief in its curative properties helped to popularise snuff among the elite.[4]

By the 17th century some prominent objectors to snuff taking arose. Pope Urban VIII threatened to excommunicate snuff takers. In Russia in 1643, Tsar Michael instituted the punishment of removing of the nose of those who used snuff. Despite this, use persisted elsewhere; King Louis XIII of France was a devout snufftaker, and by 1638, snuff use had been reported to be spreading in China.

By the 18th century, snuff had become the tobacco product of choice among the elite, prominent users including Napoleon, King George III's wife Queen Charlotte, and Pope Benedict XIII. The taking of snuff helped to distinguish the elite members of society from the common populace, which generally smoked its tobacco.[4] It was also during the 18th century that an English doctor, John Hill, warned of the overuse of snuff, causing vulnerability to nasal cancers.[5] Snuff's image as an aristocratic luxury attracted the first U.S. federal tax on tobacco, created in 1794.

In 18th-century Britain, the Gentlewoman's Magazine advised readers with ailing sight to use the correct type of Portuguese snuff, "whereby many eminent people had cured themselves so that they could read without spectacles after having used them for many years."[citation needed]

In certain areas of Africa, snuff reached native Africans before white Europeans did. A fictional representation of this is in Chinua Achebe's novel Things Fall Apart, where the Igbo villagers are regular snuff-takers long before they ever encounter the first British missionaries. In some African countries, such as South Africa and Nigeria, snuff is still popular with the older generation, though its use is slowly declining, with cigarette smoking becoming the dominant form of tobacco use. 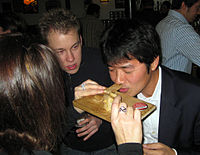 A special spring-loaded device may be used to shoot snuff directly into one's nostrils.

When snuff taking was fashionable, the manufacture of snuff accessories was a lucrative industry in several cultures. In Europe, snuff boxes ranged from those made in very basic materials, such as horn, to highly ornate designs featuring precious materials made using state of the art techniques. Since prolonged exposure to air causes snuff to dry out and lose its quality, pocket snuff boxes were designed to be airtight containers with strong hinges, generally with enough space for a day's worth of snuff only.[6] Large snuff containers, called mulls (made from a variety of materials, notably including rams horns decorated with silver), were usually kept on the table.

A floral-scented snuff called "English Rose" is provided for members of the British House of Commons at public expense due to smoking in the House being banned since 1693. A famous silver communal snuff box kept at the entrance of the House was destroyed in an air raid during World War II with a replacement being subsequently presented to the House by Winston Churchill. Very few members are said to take snuff nowadays.

In China, snuff bottles were used, usually available in two forms, both made of glass. In one type, glass bottles were decorated on the inside to protect the design. Another type used layered multi-coloured glass; parts of the layers were removed to create a picture.

1894 Kinetoscope of Fred Ott taking a snuff and then sneezing, taken by Thomas Edison's laboratory.

When sniffed, snuff often causes a sneeze. The tendency to sneeze varies with the person and the particular snuff. Generally, drier snuffs are more likely to do this. For this reason, sellers of snuff often sell handkerchiefs. Slapstick comedy and cartoons have often made use of snuff's sneeze-inducing properties.

Users of smokeless tobacco products including snuff face no known cancer risk to the lungs but more of a risk in the oral region than smokers, and have a greater cancer risk than people who do not use any tobacco products.[7] As the primary harm from smoking comes from the smoke itself, snuff has been proposed as a way of reducing harm from tobacco. [8]

Unlike tobacco smoke, snuff is free of tar and harmful gases such as carbon monoxide and nitrogen oxides. Since it cannot be inhaled into the lungs, there is no risk of lung cancer, bronchitis, and emphysema ... Though we are not aware of any direct evidence, prolonged heavy use of dry snuff might well carry a slight risk of nasopharyngeal cancer ... The position with coronary heart disease is not clear. It is not known whether nicotine or carbon monoxide is the major culprit responsible for cigarette-induced coronary heart disease. If it is carbon monoxide a switch to snuff would reduce the risk substantially, but even if nicotine plays a part our results show that the intake from snuff is no greater than from smoking.

In conclusion, the rapid absorption of nicotine from snuff confirms its potential as an acceptable substitute for smoking. Switching from cigarettes to snuff would substantially reduce the risk of lung cancer, bronchitis, emphysema, and possibly coronary heart disease as well, at the cost of a slight increase in the risk of cancer of the nasopharynx (or oral cavity in the case of wet snuff). Another advantage of snuff is that it does not contaminate the atmosphere for non-users.

Snuff is readily available over the counter in most European tobacco shops. In Britain, tobacco duty is not charged on snuff, although it is subject to the same limitations as other tobacco products for duty free purposes.

The production and sale of nasal snuff was illegal in Poland between 1996 and 2000.

Oral snuff in the form of dipping tobacco and snus is banned from all countries of the European Union except Sweden, whose agreement of admittance to the EU included an exception from the EU ban on oral tobacco products.[10] The sale of snus is also legal in Norway. 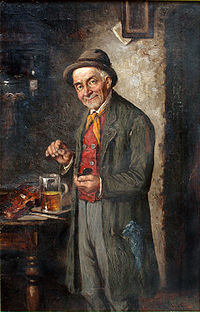 A man takes snuff from a box in a 19th century painting by V. Alfeldt.

Dry snuff is usually scented or flavoured and is intended to be sniffed through the nose. Typical flavours are floral, mentholated (also called 'medicated'), fruit, and spice, either pure or in blends. Other common flavours include Camphor, Cinnamon, Rose and Spearmint. Modern flavours include Bourbon, Cherry, Cola and Whisky.

Dry snuff comes in a range of texture and moistness, from very fine to coarse, and from toast (very dry) to very moist. Often drier snuffs are ground finer.

Moist snuff (often called dip in the US) is applied to the gums, rather than sniffed. Called dipping tobacco, it is similar to snus, a Scandinavian tobacco product, and it is possible that this type of snuff originated in Scandinavia[citation needed]. Dipping tobacco comes in many varieties, with flavours including peach, mint, and licorice. It is distinct from chewing tobacco.

In India, creamy snuff is a paste consisting of tobacco, clove oil, glycerin, spearmint, menthol, and camphor sold in a toothpaste tube. It is marketed mainly to women in India and is known by the brand names Ipco, Denobac, Tona, Ganesh. 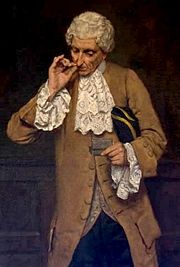