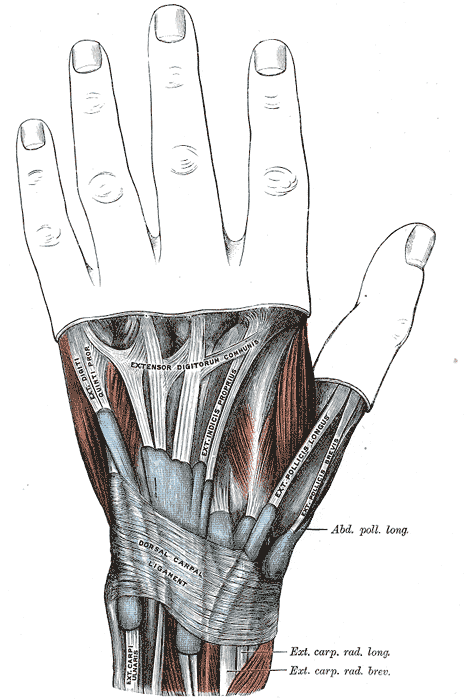 Caption2 = The mucous sheaths of the tendons on the back of the wrist. (Anatomical snuff box not labeled, but visible at right.)


MapPos =
MapCaption =
Precursor =
System =
Artery =
Vein =
Nerve =
Lymph =
MeshName =
MeshNumber =
DorlandsPre = b_20
DorlandsSuf = 12194594
The anatomical snuffbox, or radial fossa, (in Latin "Foveola radialis"), is a triangular deepening on the radial, dorsal aspect of the hand - at the level of the , specifically, the scaphoid and trapezium bones forming the floor. The name originates from the use of this surface for placing and then snorting powdered , or “.”

* The medial border of the snuffbox is the of the .
* The lateral border is a pair of parallel and intimate tendons, of the and the .

Deep to the tendons which form the borders of the anatomical snuff box lies the , which passes through the anatomical snuffbox on its course from the normal radial pulse detecting area, to the proximal space in between the first and second to contribute to the superficial and deep palmar arches. The arises within the anatomical snuffbox, while the of the can be palpated by stroking along the extensor pollicis longus with the dorsal aspect of a fingernail.

The radius and scaphoid articulate deep to the snuffbox to form the basis of the wrist joint. In the event of a fall onto an outstretched hand, this is the area through which the brunt of the force will focus. This results in these two bones being the most often fractured of the wrist. In a case where there is localized within the snuffbox, knowledge of wrist anatomy leads to the speedy conclusion that the fracture is likely to be of the scaphoid. This is understandable as the scaphoid is a small, oddly shaped bone whose purpose is to facilitate mobility rather than confer stability to the wrist joint. In the event of inordinate application of force over the wrist, this small scaphoid is clearly likely to be the weak link. Interestingly, scaphoid fracture is one of the most frequent causes of medico-legal issues.

An interesting anatomical anomaly in the vascular supply to the scaphoid is the area to which the blood supply is first delivered. Blood enters the scaphoid distally. Consequently, in the event of a fracture the proximal segment of the scaphoid will be devoid of a vascular supply, and will - if action is not taken - avascularly necrose within a sufferer's snuffbox. Due to the small size of the scaphoid and its shape, it is difficult to determine, early on, whether or not the scaphoid is indeed fractured with an x-ray. Further complications include; carpal instability (ligament disruption) and fracture-dislocations.

A sound understanding of the anatomical relationships within the wrist allows for rapid, informed, and logical appreciation of dysfunction.