The thumb is the first digit of the hand. When a person is standing in the medical anatomical position (where the palm is facing anteriorly), the thumb is the lateral-most digit. The Medical Latin English adjective for thumb is pollical.

As one of five digits, and as companion to four other fingers

The English word "finger" has two senses, even in the context of appendages of a single typical human hand:

Linguistically, it appears that the original sense was the broader of these two: penkwe-ros (also rendered as penqrós) was, in the inferred Proto-Indo-European language, a suffixed form of penkwe (or penqe), which has given rise to many Indo-European-family words (tens of them defined in English dictionaries) that involve or flow from concepts of fiveness.

The thumb shares the following with each of the other four fingers:

The thumb contrasts with each of the other four by being the only digit that:

and hence the etymology of the word: "tum" is Proto-Indo-European for " swelling " (cf "tumour" and "thigh") since the thumb is the stoutest of the digits. 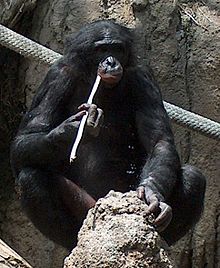 A bonobo "fishing" for termites, an example of incomplete/"untrue" opposition — "as far as he'll ever get toward orbiting the planets".[2]

In humans, opposition and apposition are two movements unique to the thumb but these words are not synonyms:

Primatologists and hand research pioneers J. Napier and P. Napier defined opposition as: "A movement by which the pulp surface of the thumb is placed squarely in contact with - or diametrically opposite to - the terminal pads of one or all of the remaining digits." For this true, pulp-to-pulp opposition to be possible, the thumb must rotate about its long axis (at the carpometacarpal joint).[3] Arguably, this definition was chosen to underline what is unique to the human thumb.

Anatomists and other researchers focused exclusively on human anatomy, on the other hand, tend to elaborate this definition in various ways and, consequently, there are hundreds of definitions.[4] Some anatomists[5] restrict opposition to when the thumb is approximated to the fifth digit (little finger) and refer to other approximations between the thumb and other digits as apposition. To anatomists, this makes sense as two intrinsic hand muscles are named for this specific movement (the opponens pollicis and opponens digiti minimi respectively).

Other researchers use another definition,[4] referring to opposition-apposition as the transition between flexion-abduction and extension-adduction; the side of the distal thumb phalanx thus approximated to the palm or the hand's radial side (side of index finger) during apposition and the pulp or "palmar" side of the distal thumb phalanx approximated to either the palm or other digits during opposition.

Moving a limb back to its neutral position is called reposition and a rotary movement is referred to as circumduction.

The muscles of the thumb can be compared to guy-wires supporting a flagpole; tension from these musclular guy-wires must be provided in all directions to maintain stability in the articulated column formed by the bones of the thumb. Because this stability is actively maintained by muscles rather than by articular constraints, most muscles attached to the thumb tend to be active during most thumb motions. [6]

A ventral forearm muscle, the flexor pollicis longus (FPL) originates on the anterior side of the radius distal to the radial tuberosity and from the interosseous membrane. It passes through the carpal tunnel in a separate tendon sheath, after which it lies between the heads of the flexor pollicis brevis. It finally attaches onto the base of the distal phalanx of the thumb. It is innervated by the anterior interosseus branch of the median nerve (C7-C8) [8]

The abductor pollicis longus (APL) originates on the dorsal sides of both the ulna and the radius, and from the interosseous membrane. Passing through the first tendon compartment, it inserts to the base of the first metacarpal bone. A part of the tendon reaches the trapezium, while another fuses with the tendons of the extensor pollicis brevis and the abductor pollicis brevis. Except for abducting the hand, it flexes the hand towards the palm and abducts it radially. It is innervated by the deep branch of the radial nerve (C7-C8). [9]

The extensor pollicis longus (EPL) originates on the dorsal side of the ulna and the interosseous membrane. Passing through the third tendon compartment, it is inserted onto the base of the distal phalanx of the thumb. It uses the dorsal tubercle on the lower extremity of the radius as a fulcrum to extend the thumb and also dorsiflexes and abducts the hand at the wrist. It is innervated by the deep branch of the radial nerve (C7-C8). [9]

The extensor pollicis brevis (EPB) originates on the ulna distal to the abductor pollicis longus, from the interosseus membrane, and from the dorsal side of the radius. Passing through the first tendon compartment together with the abductor pollicis longus, it is attached to the base of the proximal phalanx of the thumb. It extends the thumb and, because of its close relationship to the long abductor, also abducts the thumb. It is innervated by the deep branch of the radial nerve (C7-T1). [9]

The tendons of the extensor pollicis longus and extensor pollicis brevis form what is known as the anatomical snuff box (an indentation on the lateral aspect of the thumb at its base) The radial artery can be palpated anteriorly at the wrist(not in the snuffbox).

There are four thenar muscles:

The abductor pollicis brevis (APB) originates on the scaphoid tubercle and the flexor retinaculum. It inserts to the radial sesamoid bone and the proximal phalanx of the thumb. It is innervated by the median nerve (C8-T1). [10]

The flexor pollicis brevis (FPB) has two heads. The superficial head arises on the flexor retinaculum, while the deep head originates on three carpal bones: the trapezium, trapezoid, and capitate. The muscle is inserted onto the radial sesamoid bone of the metacarpophalangeal joint. It acts to flex, adduct, and abduct the thumb, and is therefore also able to oppose the thumb. The superficial head is innervated by the median nerve, while the deep head is innervated by the ulnar nerve (C8-T1). [10]

The adductor pollicis also has two heads. The transversal head originates along the entire third metacarpal bone, while the oblique head originates on the carpal bones proximal to the third metacarpal. The muscle is inserted onto the ulnar sesamoid bone of the metacarpophalangeal joint. It adducts the thumb, and assists in opposition and flexion. It is innervated by the deep branch of the ulnar nerve (C8-T1). [10]

The opponens pollicis originates on the tubercle of the trapezium and the flexor retinaculum. It is inserted onto the radial side of the first metacarpal. It opposes the thumb and assists in adduction. It is innervated by the median nerve. [10]

The first dorsal interosseous, one of the central muscles of the hand, extends from the base of the thumb metacarpal to the radial side of the proximal phalanx of the index finger. [11]

"Hitchhiker's thumb" is an autosomal recessive trait more formally known as "distal hyperextensibility of the thumb".[12] Homozygous carriers can extend the top of the thumb backwards nearly 90° when the thumb is extended in a "thumbs-up". Cases of Hitchhiker's thumb are subject to a variation in range of motion. Some who have this condition are able to hyperextend thumbs backwards 90° while still able to bend thumbs forward partially or with an added normal forward range of motion. Those with a more traditional case of Hitchhiker's thumbs can hyperextend backwards 90° while unable to bend past a straight position of the thumb.[13] Malformations includes a triphalangeal thumb and polydactyly.

One of the earlier significant contributors to the study of hand grips was orthopedic primatologist and paleoathropologist John Napier who proposed organizing the movements of the hand by their anatomical basis as opposed to work done earlier that had only used arbitrary classification.[14] Most of this early work on hand grips had a pragmatic basis as it was intended to narrowly define compensable injuries to the hand, which required an understanding of the anatomical basis of hand movement. Napier proposed two primary prehensile grips: the precision grip and the power grip.[15] The precision and power grip are defined by the position of the thumb and fingers where:

Opposability of the thumb should not be confused with a precision grip as some animals possess semi-opposable thumbs yet are known to have extensive precision grips (Tufted Capuchins for example).[16] Nevertheless, precision grips are usually only found in higher apes, and only in degrees significantly more restricted than in humans.[17]

The opposable thumb has helped the human species develop more accurate fine motor skills. It is also thought to have directly led to the development of tools, not just in humans or their evolutionary ancestors, but other primates as well. The opposable thumb ensured that important human functions such as writing were possible.[18][19] The thumb, in conjunction with the other fingers, makes human hands and those of other species with similar hands some of the most dexterous in the world.[20]

A primitive autonomization of the first carpometacarpal joint (CMC) may have occurred in dinosaurs. A real differentiation appeared perhaps 70 mya in early primates, while the shape of the human thumb CMC finally appears about 5 mya. The result of this evolutionary process is a human CMC joint positioned at 80° of pronation, 40 of abduction, and 50° of flexion in relation to an axis passing through the second and third CMC joints. [21]

Opposable thumbs are shared by many primates, including most simians, and some prosimians. The climbing and suspensory behaviour in orthograde apes, such as chimpanzees, has resulted in elongated hands while the thumb has remained short. As a result, these primates are unable to perform the pad-to-pad grip associated with opposability. However, in pronograde monkeys such as baboons, an adaptation to a terrestrial lifestyle has led to reduced digit length and thus hand proportions similar to those of humans. Consequently, these primates have dexterous hands and are able to grasp objects using a pad-to-pad grip. It can thus be difficult to identify hand adaptations to manipulation-related tasks based solely on thumb proportions. [22]

The evolution of the fully opposable thumb is usually associated with Homo habilis, the forerunner of Homo sapiens.[23][24] This, however, is the suggested result of evolution from Homo erectus (around 1 mya) via a series of intermediate anthropoid stages, and is therefore a much more complicated link.

It is possible, though, that a more likely scenario may be that the specialized precision gripping hand (equipped with opposable thumb) of Homo habilis preceded walking, with the specialized adaptation of the spine, pelvis, and lower extremities preceding a more advanced hand. And, it is logical that a conservative, highly functional adaptation be followed by a series of more complex ones that complement it. With Homo habilis, an advanced grasping-capable hand was accompanied by facultative bipedalism, possibly implying, assuming a co-opted evolutionary relationship exists, that the latter resulted from the former as obligate bipedalism was yet to follow.[25] Walking may have been a by-product of busy hands and not vice versa.

HACNS1 (also known as Human Accelerated Region 2) is a gene enhancer "that may have contributed to the evolution of the uniquely opposable human thumb, and possibly also modifications in the ankle or foot that allow humans to walk on two legs". Evidence to date shows that of the 110,000 gene enhancer sequences identified in the human genome, HACNS1 has undergone the most change during the human evolution since the chimpanzee-human last common ancestor.[26]

Other animals with opposable digits

Darwinius masillae, an Eocene primate fossil often described as a missing link between prosimian and simian, had hands and feet with highly flexible digits featuring opposable thumbs and halluces. [28]

Additionally, in many polydactyl cats, both the innermost and outermost ("pinky") toes may become opposable, allowing the cat to perform more complex tasks.

Most birds have at least one opposable digit on the foot, in various configurations, but these are seldom called "thumbs".

The Wiktionary definition of thumb