In biology, dactyly is the arrangement of digits (fingers and toes) on the hands, feet, or sometimes wings of a tetrapod animal. It comes from the Greek word δακτυλος = "finger".

Sometimes the ending "-dactylia" is used. The derived adjectives end with "-dactyl" or "-dactylous".

As a normal feature

In Reptiles, the limbs are pentadactylous in condition.

Tetradactyly (from Greek tetra-="four" plus δακτυλος = "finger") is the condition of having four digits on a limb, as in many amphibians, birds, and theropod dinosaurs. Some mammals also exhibit tetradactyly (for example pigs and the hind limbs of dogs and cats). Cartoon characters are commonly drawn with four digits on each hand/foot as it's clearer to see than five.

Tridactyly (from Greek tri- = "three" plus δακτυλος = "finger") is the condition of having three digits on a limb, as in the Rhinoceros and ancestors of the horse such as Protohippus and Hipparion. These all belong to the Perissodactyla. Some birds also have three toes, including emus, bustards, and quail.

Didactyly (from Greek di-="two" plus δακτυλος = "finger") or bidactyly is the condition of having two digits on each limb, as in the Hypertragulidae and Two-toed Sloth, Choloepus didactylus. In humans this name is used for an abnormality in which the middle digits are missing, leaving only the thumb and fifth finger, or big and little toes. Cloven-hoofed mammals (such as deer, sheep and cattle - 'Artiodactyla') have only two digits, as do ostriches.

Monodactyly (from Greek monos- = "one" plus δακτυλος = "finger") is the condition of having a single digit on a limb, as in modern horses. These belong to the Perissodactyla.

As a congenital defect 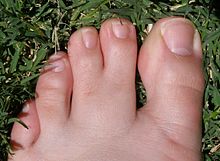 Syndactyly (from Greek συν- = "together" plus δακτυλος = "finger") is a condition where two or more digits are fused together. It occurs normally in some mammals, such as the siamang and most diprotodontid marsupials such as kangaroos. It occurs as an unusual condition in humans.

Polydactyly (from Greek πολυ- = "many" plus δακτυλος = "finger") is when a limb has more than the usual number of digits. This can be:-

Oligodactyly (from Greek ὀλιγο- = "few" plus δακτυλος = "finger") is having too few digits when not caused by an amputation. It is sometimes incorrectly called hypodactyly or confused with aphalangia, the absence of the phalanx bone on one or (commonly) more digits. When all the digits on a hand or foot are absent, it is referred to as adactyly.[1]

Ectrodactyly, also known as split-hand malformation, is the congenital absence of one or more central digits of the hands and feet. Consequently, it is a form of oligodactyly. News anchor Bree Walker is probably the best-known person with this condition, which affects about one in 91,000 people[citation needed]. It is conspicuously more common in the Vadoma in Zimbabwe. 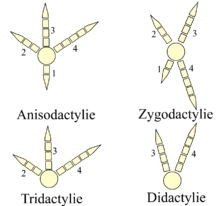 Anisodactyly is the most common arrangement of digits in birds, with three toes forward and one back. This is common in songbirds and other perching birds, as well as hunting birds like eagles, hawks, and falcons.

Syndactyly, as it occurs in birds, is like anisodactyly, except that the third and fourth toes (the outer and middle forward-pointing toes), or three toes, are fused together, as in the Belted Kingfisher Ceryle alcyon. This is characteristic of Coraciiformes (Kingfishers, Bee-eaters, Rollers, and relatives).

Zygodactyly (from Greek ζυγον, a yoke) is an arrangement of digits in birds, with two toes facing forward (digits 2 and 3) and two back (digits 1 and 4). This arrangement is most common in arboreal species, particularly those that climb tree trunks or clamber through foliage. Zygodactyly occurs in the parrots, woodpeckers (including flickers), cuckoos (including roadrunners), and some owls. Zygodactyl tracks have been found dating to 120-110 Ma (early Cretaceous), 50 million years before the first identified zygodactyl fossils.[2]

Heterodactyly is like zygodactyly, except that digits 3 and 4 point forward and digits 1 and 2 point back. This is found only in trogons.

Pamprodactyl is an arrangement in which all four toes point forward. It is a characteristic of swifts (Apodidae).

The feet of chameleons are fused into a group of two and a group of three toes which oppose one another to grasp branches in a pincer-like arrangement. This has been called zygodactyly or didactyly, though the details of the arrangements differ.

Schizodactyly is a primate term for grasping and clinging with the second and third digit, instead of the thumb and second digit.