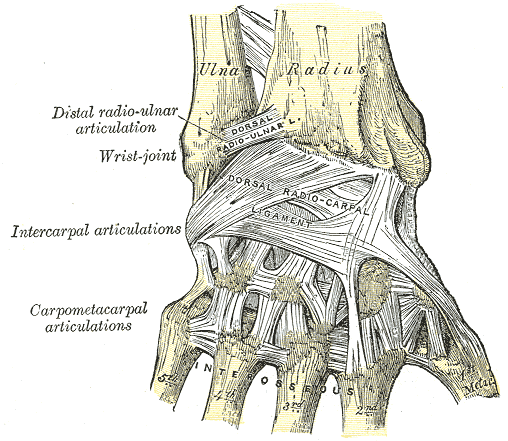 
Caption2 =
Width = 300
System =
MeshName =
MeshNumber =
The carpometacarpal joint is a in the that articulates the and the .

Carpometacarpal Articulation of the Thumb

This is a joint of reciprocal reception between the first and the trapezium; it enjoys great freedom of movement on account of the configuration of its articular surfaces, which are saddle-shaped.

The joint is surrounded by a capsule, which is thick but loose, and passes from the circumference of the base of the metacarpal bone to the rough edge bounding the articular surface of the greater trapezium; it is thickest laterally and dorsally, and is lined by .

In this articulation the movements permitted are flexion and extension in the plane of the palm of the hand, abduction and adduction in a plane at right angles to the palm, circumduction, and opposition.

It is by the movement of opposition that the tip of the thumb is brought into contact with the volar surfaces of the slightly flexed fingers.

This movement is effected through the medium of a small sloping facet on the anterior lip of the saddle-shaped articular surface of the greater multangular.

The flexor muscles pull the corresponding part of the articular surface of the metacarpal bone on to this facet, and the movement of opposition is then carried out by the adductors.

Extension is effected mainly by the , assisted by the and brevis.

Adduction is carried out by the Adductor; abduction mainly by the abductor pollicis longus and brevis, assisted by the extensors.

Articulations of the Other Four Metacarpal Bones with the Carpus

The joints between the carpus and the second, third, fourth, and fifth metacarpal bones are arthrodial.

The bones are united by dorsal, volar, and interosseous ligaments.

The interosseous ligaments consist of short, thick fibers, and are limited to one part of the carpometacarpal articulation; they connect the contiguous inferior angles of the capitate and hamate with the adjacent surfaces of the third and fourth metacarpal bones.

The synovial membranes of the wrist and carpus are thus seen to be five in number.
* The first passes from the lower end of the ulnar to the ulnar notch of the , and lines the upper surface of the articular disk.
* The second passes from the articular disk and the lower end of the radius above, to the bones of the first row below.
* The third, the most extensive, passes between the contiguous margins of the two rows of carpal bones, and sometimes, in the event of one of the interosseous ligaments being absent, between the bones of the second row to the carpal extremities of the second, third, fourth, and fifth metacarpal bones.
* The fourth extends from the margin of the greater multangular to the metacarpal bone of the .
* The fifth runs between the adjacent margins of the triangular and pisiform bones.

Occasionally the fourth and fifth carpometacarpal joints have a separate synovial membrane.

The movements permitted in the carpometacarpal articulations of the fingers are limited to slight gliding of the articular surfaces upon each other, the extent of which varies in the different joints.