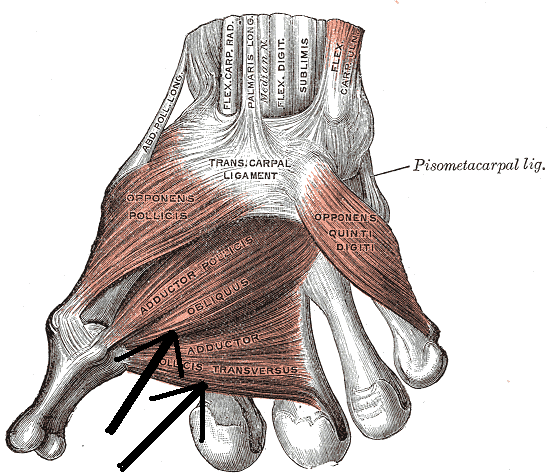 Caption2 = Front of the left . Deep muscles. (Adductor pollicis visible at bottom center.)
Origin = Transverse head: anterior body of the
Oblique head: bases of the second and the s and the adjacent and bones
Insertion = medial side of the base of the of the and the
Action = the thumb at the
Antagonist = ,
Blood =
Nerve = (T1)
MeshName =
MeshNumber =
DorlandsPre = m_22
DorlandsSuf = 12548366
The adductor pollicis muscle is a in the that functions to adduct the thumb. It has two heads: transverse and oblique.

The oblique head (occasionally known as adductor obliquus pollicis) arises by several slips from the , the bases of the second and third s, the intercarpal ligaments, and the sheath of the tendon of the .

From this origin the greater number of fibers pass obliquely downward and converge to a tendon, which, uniting with the tendons of the medial portion of the and the transverse head of the adductor pollicis, is inserted into the ulnar side of the base of the proximal phalanx of the thumb, a bone being present in the tendon.

A considerable fasciculus, however, passes more obliquely beneath the tendon of the to join the lateral portion of the and the .

It is triangular, arising by a broad base from the lower two-thirds of the palmar surface of the third bone; the fibers converge, to be inserted with the medial part of the and the oblique head into the ulnar side of the base of the proximal phalanx of the .

The passes between the two heads, travelling from the back of the hand into the palm, where it forms the .

The adductor pollicis is innervated by the deep branch of the .

"Adduction of the thumb" is bringing it back into the plane of the palm of the hand from its previously abducted position. This muscle, however, also brings the thumb to the side of the palm and index finger.

Froment's Sign is used to test for a compromised adductor pollicis muscle.