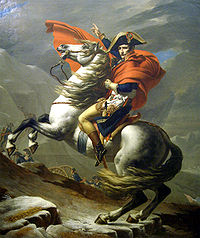 Marengo (c. 1793 - 1831) was the famous war mount of Napoleon I of France. Named after the Battle of Marengo, through which he carried his rider safely, Marengo was imported to France from Egypt in 1799 as a 6-year-old. The gray Arabian was probably bred at the famous El Naseri Stud. Although small (only 14.1 hands.) he was a reliable, steady, and courageous mount.

Marengo was wounded eight times in his career, and carried the Emperor in the Battle of Austerlitz, Battle of Jena-Auerstedt, Battle of Wagram, and Battle of Waterloo. He also was frequently used in the 80 mile gallops from Valladolid to Burgos, which he often completed in 5 hours. As one of 52 horses in Napoleon's personal stud, Marengo fled with these horses when it was raided by Russians in 1812, surviving the retreat from Moscow. However, the stallion was captured in 1815 at the Battle of Waterloo by William Henry Francis Petre, 11th Baron Petre.

Petre brought the horse back to the United Kingdom of Great Britain and Ireland and sold him on to Lieutenant-Colonel Angerstein of the Grenadier Guards. Marengo stood at stud (unsuccessfully) at New Barnes, near Ely, at the age of 27. He eventually died at the old age of 38, and his skeleton (minus a hoof) was preserved and later passed to the Royal United Services Institute and is now on display at the National Army Museum in Chelsea, London. The hoof was given to the officers of the Brigade of Guards by Angerstein as a snuff box.

During a sequence in the 1959 British film The 39 Steps a character called "Mr Memory" appears in a live stage variety show and is called upon to name Napoleon's horse at Waterloo: Marengo.

The 1967 English version of the Speed Racer episode "Race for Revenge", a mysterious car named Marengo is featured. As the mystery becomes unveiled, Speed Racer discusses his memory of French history and how Marengo was the name of Napoleon's horse. Pops Racer, Speed's father, enters the room and finishes the story of Marengo and that the horse's name was connected to a previous racing auto driven by a man named Flash Marker who had been killed driving it. In telling the brief story of Marengo, a rendition of Jacques-Louis David's painting, Napoleon Crossing the Alps, was drawn in the episode. However, when Trans-Lux Corporation released the English version, Marengo's name was mis-translated from French to Japanese to English into the name Melange.

Marengo is played by Stephen Fry in BBC Radio 4's 2011 Warhorses of Letters, "the world's first epistolary equine love story", a comic exchange of letters between Napoleon's horse and Copenhagen (played by Daniel Rigby), owned by the Duke of Wellington[1].