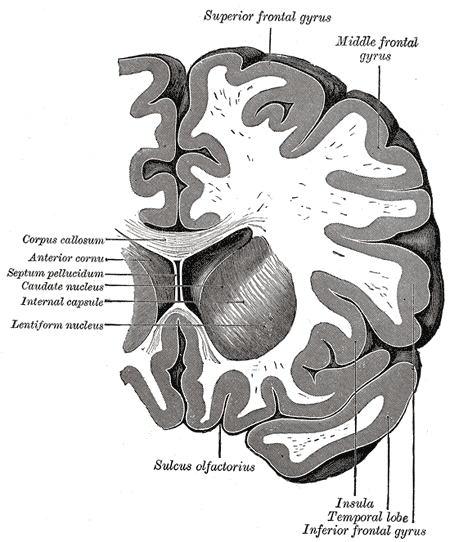 Caption2 = Coronal section through anterior cornua of lateral ventricles.
IsPartOf =
Components =
Artery = Anterior cerebral
Vein =
BrainInfoType = hier
BrainInfoNumber = 65
MeshName =
MeshNumber =
DorlandsPre = g_13
DorlandsSuf = 12405282
The superior frontal makes up about one-third of the of the human . It is bounded laterally by the .

The superior frontal gyrus, like the and the , is more of a region than a true gyrus.

In experiments, Goldberg et al. have found evidence that the superior frontal gyrus is involved in , in coordination with the action of the . [cite journal |author=Goldberg I, Harel M, Malach R |title=When the brain loses its self: prefrontal inactivation during sensorimotor processing |journal=Neuron |volume=50 |issue=2 |pages=329–39 |year=2006 |pmid=16630842 |doi=10.1016/j.neuron.2006.03.015] [ [http://www.newscientist.com/article.ns?id=dn9019 Watching the brain 'switch off' self-awareness at newscientist.com] ]

In , neurosurgeon described a 16-year-old female patient (referred to as "patient AK") who ed when her SFG was stimulated with electric current during treatment for . [cite journal |author=Fried I, Wilson C, MacDonald K, Behnke E |title=Electric current stimulates laughter |journal=Nature |volume=391 |issue=6668 |pages=650 |year=1998 |pmid=9490408 |doi=10.1038/35536] Electrical stimulation was applied to the cortical surface of AK's left frontal lobe while an attempt was made to locate the focus of her epileptic seizures (which were never accompanied by laughter).

Fried identified a 2 cm by 2 cm area on the left SFG where stimulation produced laughter consistently (over several trials). AK reported that the laughter was accompanied by a sensation of merriment or mirth. AK gave a different explanation for the laughter each time, attributing it to an (unfunny) external stimulus. Thus, laughter was attributed to the picture she was asked to name (saying "the horse is funny"), or to the sentence she was asked to read, or to persons present in the room ("you guys are just so funny... standing around").

Increasing the level of stimulation current increased the duration and intensity of laughter.For example, at low currents only a was present, while at higher currents a louder, contagious laughter was induced. The laughter was also accompanied by the stopping of all activities involving speech or hand movements.