Coherent anti-Stokes Raman spectroscopy, also called Coherent anti-Stokes Raman scattering spectroscopy (CARS), is a form of spectroscopy used primarily in chemistry, physics and related fields. It is sensitive to the same vibrational signatures of molecules as seen in Raman spectroscopy, typically the nuclear vibrations of chemical bonds. Unlike Raman spectroscopy, CARS employs multiple photons to address the molecular vibrations, and produces a signal in which the emitted waves are coherent with one another. As a result, CARS is orders of magnitude stronger than spontaneous Raman emission. CARS is a third-order nonlinear optical process involving three laser beams: a pump beam of frequency ωp, a Stokes beam of frequency ωS and a probe beam at frequency ωpr. These beams interact with the sample and generate a coherent optical signal at the anti-Stokes frequency (ωpr+ωp-ωS). The latter is resonantly enhanced when the frequency difference between the pump and the Stokes beams (ωp-ωS) coincides with the frequency of a Raman resonance, which is the basis of the technique's intrinsic vibrational contrast mechanism.[1][2]

The acronym CARS, which invokes a seemingly inadvertent relation to automobiles, is actually closely related to the birth story of the technique. In 1965, a paper was published by two researchers of the Scientific Laboratory at the Ford Motor Company, P. D. Maker and R. W. Terhune, in which the CARS phenomenon was reported for the first time.[3] Maker and Terhune used a pulsed ruby laser to investigate the third order response of several materials. They first passed the ruby beam of frequency ω through a Raman shifter to create a second beam at ω-ωv, and then directed the two beams simultaneously onto the sample. When the pulses from both beams overlapped in space and time, the Ford researchers observed a signal at ω+ωv, which is the blue-shifted CARS signal. They also demonstrated that the signal increases significantly when the difference frequency ωv between the incident beams matches a Raman frequency of sample. Maker and Terhune called their technique simply 'three wave mixing experiments'. The name coherent anti-Stokes Raman spectroscopy was assigned almost ten years later, by Begley et al. at Stanford University in 1974.[4] Since then, this vibrationally sensitive nonlinear optical technique has been commonly known as CARS. 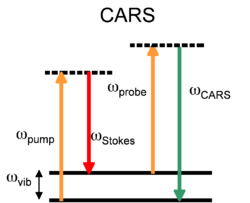 The CARS process can be physically explained by using either a classical oscillator model or by using a quantum mechanical model that incorporates the energy levels of the molecule. Classically, the Raman active vibrator is modeled as a (damped) harmonic oscillator with a characteristic frequency of ωv. In CARS, this oscillator is not driven by a single optical wave, but by the difference frequency (ωp-ωS) between the pump and the Stokes beams instead. This driving mechanism is similar to hearing the low combination tone when striking two different high tone piano keys: your ear is sensitive to the difference frequency of the high tones. Similarly, the Raman oscillator is susceptible to the difference frequency of two optical waves. When the difference frequency ωp-ωS approaches ωv, the oscillator is driven very efficiently. On a molecular level, this implies that the electron cloud surrounding the chemical bond is vigorously oscillating with the frequency ωp-ωS. These electron motions alter the optical properties of the sample, i.e. there is a periodic modulation of the refractive index of the material. This periodic modulation can be probed by a third laser beam, the probe beam. When the probe beam is propagating through the periodically altered medium, it acquires the same modulation. Part of the probe, originally at ωpr will now get modified to ωpr+ωp-ωS, which is the observed anti-Stokes emission. Under certain beam geometries, the anti-Stokes emission may diffract away from the probe beam, and can be detected in a separate direction.

CARS is often compared to Raman spectroscopy as both techniques probe the same Raman active modes. Raman can be done using a single continuous wave (CW) laser whereas CARS requires (generally) two pulsed laser sources. The Raman signal is detected on the red side of the incoming radiation where it might have to compete with other fluorescent processes. The CARS signal is detected on the blue side, which is free from fluorescence, but it comes with a non-resonant contribution. The differences between the signals from Raman and CARS (there are many variants of both techniques) stems largely from the fact that Raman relies on a spontaneous transition whereas CARS relies on a coherently driven transition. The total Raman signal collected from a sample is the incoherent addition of the signal from individual molecules. It is therefore linear in the concentration of those molecules and the signal is emitted in all directions. The total CARS signal comes from a coherent addition of the signal from individual molecules. For the coherent addition to be additive, phase-matching must be fulfilled. For tight focusing conditions this is generally not a restriction. Once phase-matching is fulfilled the signal amplitude grows linear with distance so that the power grows quadratically. This signal forms a collimated beam that is therefore easily collected. The fact that the CARS signal is quadratic in the distance makes it quadratic with respect to the concentration and therefore especially sensitive to the majority constituent. The total CARS signal also contains an inherent non-resonant background. This non-resonant signal can be considered as the result of (several) far off-resonance transitions that also add coherently. The resonant amplitude contains a phase shift of Pi over the resonance whereas the non-resonant part does not. The spectral line shape of the CARS intensity therefore resembles a Fano-profile which is shifted with respect to the Raman signal. To compare the spectra from multi-component compounds, the (resonant) CARS spectral amplitude should be compared to the Raman spectral intensity.

Theoretically Raman spectroscopy and CARS spectroscopy are equally sensitive as they use the same molecular transitions. However, given the limits on input power (damage threshold) and detector noise (integration time), the signal from a single transition can be collected much faster in practical situation (a factor of 105) using CARS. Imaging of known substances (known spectra) is therefore often done using CARS. Given the fact that CARS is a higher order nonlinear process, the CARS signal from a single molecule is larger than the Raman signal from a single molecule for a sufficiently high driving intensity. However at very low concentrations, the advantages of the coherent addition for CARS signal reduces and the presence of the incoherent background becomes an increasing problem.

Since CARS is such a nonlinear process there are not really any 'typical' experimental numbers. One example is given below under the explicit warning that just changing the pulse duration by one order of magnitude changes the CARS signal by three orders of magnitude. The comparison should only be used as an indication of the order of magnitude of the signals. 200 mW average power input (CW for the Raman), in a 0.9NA objective with a center wavelength around 800 nm, constitutes a power density of 26 MW/cm,2 (focus length = 1.5 micrometre, focus volume = 1.16 micrometre3, photon energy = 2.31 10−19 J or 1.44 eV). The Raman cross section for the vibration of the aromatic ring in Toluene around 1000 cm−1 is on the order of 10−29cm2/molecule*steradian. Therefore the Raman signal is around 26 10−22 W/molecule*steradian or 3.3 10−21 W/molecule (over 4Pi). That is 0.014 photon/sec*molecule. The density of Toluene = 0.8668 103 kg/m3, Molecular mass = 92.14 10−3 kg/mol. Therefore the focal volume (~1 cubic micrometre) contains 6 109 molecules. Those molecules together generate a Raman signal in the order of 2 10−11 W (20pW) or roughly one hundred million photons/sec (over a 4Pi solid angle). A CARS experiment with similar parameters (150 mW at 1064 nm, 200 mW at 803.5 nm, 15ps pulses at 80Mhz repetition frequency, same objective lens) yields roughly 17.5 10−6 W (on the 3000 cm−1 line, which has 1/3 of the strength and roughly 3 times the width). This CARS power is roughly 106 higher than the Raman but since there are 6 109 molecules, the signal per molecule from CARS is only 4 10−25 W/molecule*sec or 1.7 10−6 photons/molecule*sec. If we allow two factors of three (line strength and line width) then the spontaneous Raman signal per molecule still exceeds the CARS per molecule by more than two orders of magnitude. The coherent addition of the CARS signal from the molecules however yields a total signal that is much higher than the Raman.

The sensitivity in many CARS experiments is not limited by the detection of CARS photons but rather by the distinction between the resonant and non-resonant part of the CARS signal.