The Derwent is a river in Tasmania, Australia. It was named after the River Derwent, Cumbria by British Commodore John Hayes who explored it in 1793. The name is Brythonic Celtic for "valley thick with oaks".[1][2] John Hays placed the name "Derwent River" only in the upper part of the river. Matthew Flinders placed the name on all of the river.[3]

The banks of the Derwent were once covered by forests and occupied by Aborigines. European settlers farmed the area and during the 20th century many dams were built on its tributaries.

The Derwent River valley was inhabited by the Mouheneener people[4] for at least 8,000 years before British settlement. Evidence of their occupation is found in many middens along the banks of the river.[citation needed] In 1793, John Hayes named it after the River Derwent, which runs past his birthplace of Bridekirk, Cumberland.[5]

When first explored by Europeans, the lower parts of the picturesque valley were clad in thick she-oak forests, remnants of which remain in various parts of the lower foreshore.[6]

There was a thriving whaling industry until the 1840s when the industry rapidly declined due to over-exploitation.[7]

The large estuary forms the Port of the City of Hobart – often claimed to be the deepest sheltered harbour in the Southern Hemisphere; some past guests of the port include the HMS Beagle, carrying Charles Darwin, in February, 1836, the USS Enterprise and USS Missouri. The largest vessel to ever travel the Derwent is the 113,000 tonne, 61 metre high, ocean liner 'Diamond Princess', which made its first visit in January 2006. At points in its lower reaches the river is nearly three kilometres wide, and as such is the widest river in Tasmania. 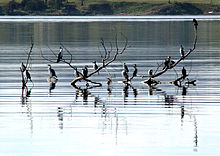 Until the construction of several hydroelectric dams between 1934 and 1968, it was prone to frequent flooding. There are more than 20 dams and reservoirs used for the generation of hydro-electricity on the tributaries of the Derwent River, including on the Clyde River, Dee River, Jordan River, Nive River, Ouse River, Plenty River and Styx Rivers. Seven lakes have been formed by damming the Derwent and Nive tributary for hydroelectric purposes: Lakes Meadowbank, Cluny, Repulse, Catagunya, Wayatinah, Liapootah and King William. Further other dams and diversions add to this complex scheme. A substantial part of the dam construction work was performed by Polish and British migrants after World War II. The State of Tasmania is now attempting to diversify its over reliance on power from hydroelectricity, specially considering the low storage capacity of the overall Hydro system.[8]

Several bridges connect the western shore (the more heavily populated side of the river) to the eastern shore of Hobart – in the greater Hobart area, these include the five lane Tasman Bridge, near the CBD, just north of the port; the four lane Bowen Bridge; and the two lane Bridgewater Bridge and Causeway. Until 1964 the Derwent was crossed by the unique Hobart Bridge, a floating concrete structure just upstream from where the Tasman Bridge now stands.[9]

Travelling further north from the Bridgewater crossing, the next crossing point is New Norfolk Bridge, slightly north of the point where the Derwent reverts from seawater to fresh water, Bushy Park, Upper Meadowbank Lake, Lake Repulse Road, Wayatinah, and the most northerly crossing is at Derwent Bridge, before the river reaches its source of Lake St Clair. At the Derwent Bridge crossing, the flow of the river is generally narrow enough to be stepped across.

The Upper Derwent is affected by agricultural run-off, particularly from land clearing and forestry. The Lower Derwent suffers from extremely high levels of heavy metal contamination in sediments. The State Government-backed Derwent Estuary Program points out in particular that levels of mercury, lead, zinc and cadmium exceed national guidelines. They also recommend against consuming shellfish and caution against consuming fish in general.[6] A large proportion of the heavy metal contamination comes from major industries that discharge into the river: an electrolytic zinc smelter at Lutana established in 1917, and a paper mill at Boyer which opened in 1941.[6]

The river is the subject of the multimedia performance "Falling Mountain" (2005 Mountain Festival), a reference to the mountain in the Cradle Mountain-Lake St Clair National Park from which the river rises.

The Derwent is mentioned in the song, "Mt Wellington Reverie" by Australian band, Augie March[1]. Mount Wellington is located beside Hobart.

The Derwent is often referred to as the river of the "Salmon Pink Sunset" as a reference to the magnificent salmon pink glow that emanates over the region once the sun sets.