Darmstadtium is a chemical element with the symbol Ds and atomic number 110. It is placed as the heaviest member of group 10, but no known isotope is sufficiently stable to allow chemical experiments to confirm its placing in that group. This synthetic element is one of the so-called super-heavy atoms and was first synthesized in 1994, at a facility near the city of Darmstadt, Germany, from which it takes its name. The longest-lived and heaviest isotope known is 281aDs with a half-life of ~10 s although a possible nuclear isomer, 281bDs has an unconfirmed half-life of about 4 minutes.

Darmstadtium was first created on November 9, 1994, at the Gesellschaft für Schwerionenforschung (GSI) in Darmstadt, Germany, by Peter Armbruster and Gottfried Münzenberg, under the direction of professor Sigurd Hofmann. Four atoms of it were detected by a nuclear fusion reaction caused by bombarding a lead-208 target with nickel-62 ions: [1]

In the same series of experiments, the same team also carried out the reaction using heavier nickel-64 ions. During two runs, 9 atoms of 271Ds were convincingly detected by correlation with known daughter decay properties: [2]

The IUPAC/IUPAP Joint Working Party (JWP) recognised the GSI team as discoverers in their 2001 report.[3]

Darmstadtium was first given the temporary name ununnilium (/ˌuːnəˈnɪliəm/ or /ˌʌnəˈnɪliəm/,[4] symbol Uun). Once recognized as discoverers, the team at GSI considered the names darmstadtium (Ds) and wixhausium (Wi) for element 110. They decided on the former and named the element after the city near the place of its discovery, Darmstadt and not the suburb Wixhausen itself. The new name was officially recommended by IUPAC on August 16, 2003. The name was approved on November 4, 2011.[5]

The team at the HIRFL, Lanzhou, China, are planning to restudy the reaction 238U(40Ar,xn) after recent calculations indicated a measurable yield in the 4n evaporation channel, leading to the new nuclide 274Ds.

The below table contains various combinations of targets and projectiles which could be used to form compound nuclei with Z=110.

This section deals with the synthesis of nuclei of darmstadtium by so-called "cold" fusion reactions. These are processes which create compound nuclei at low excitation energy (~10-20 MeV, hence "cold"), leading to a higher probability of survival from fission. The excited nucleus then decays to the ground state via the emission of one or two neutrons only.

In addition to the official discovery reactions, in October–November 2000, the team at GSI also studied the reaction using a Pb-207 target in order to search for the new isotope 270Ds. They succeeded in synthesising 8 atoms of 270Ds, relating to a ground state isomer, 270gDs, and a high-spin K-isomer, 270mDs. [11]

The GSI team studied this reaction in 1994 as part of their discovery experiment. Three atoms of 269Ds were detected.[1] A fourth decay chain was measured but subsequently retracted.

This reaction was first studied by the team at Dubna in 1986. They were unable to detect any product atoms and measured a cross section limit of 1 pb. In 1995, the team at LBNL reported that they had succeeded in detecting a single atom of 267Ds from the 1n neutron evaporation channel. However, several decays were missed and further research is required to confirm this discovery. [12]

This section deals with the synthesis of nuclei of darmstadtium by so-called "hot" fusion reactions. These are processes which create compound nuclei at high excitation energy (~40-50 MeV, hence "hot"), leading to a reduced probability of survival from fission. The excited nucleus then decays to the ground state via the emission of 3-5 neutrons. Fusion reactions utilizing 48Ca nuclei usually produce compound nuclei with intermediate excitation energies (~30-35 MeV) and are sometimes referred to as "warm" fusion reactions. This leads, in part, to relatively high yields from these reactions.

The synthesis of darmstadtium by hot fusion pathways was first attempted in 1986 by the team at Dubna. Using the method of detection of spontaneous fission, they were unable to measure any SF activities and calculated a cross section limit of 1 pb for the decay mode. In three separate experiments between November 1997 and October 1998, the same team re-studied this reaction as part of their new 48Ca program on the synthesis of superheavy elements. Several SF activities with relatively long half-lives were detected and tentatively assigned to decay of the daughters 269Sg or 265Rf, with a cross section of 5 pb. These observations have not been confirmed and the results are taken as only an indication for the synthesis of darmstadtium in this reaction.

This reaction was attempted in 1986 and 1987 by the Dubna team. In both experiments, a 10 ms SF activities was measured and assigned to 272Ds, with a calculated cross section of 10 pb. This activity is currently not thought to be due to a darmstadtium isotope.

This reaction was first attempted by the Dubna team in 1987. Only spontaneous fission from the transfer products 240mfAm and 242mfAm were observed and the team calculated a cross section limit of 1.6 pb. The team at GSI first studied this reaction in 1990. Once again, no atoms of darmstadtium could be detected. In August 2001, the GSI repeated reaction, without success, and calculated a cross section limit of 1.0 pb.

This reaction was first attempted by the Dubna team in 1987. No spontaneous fission was observed.

This reaction was first attempted by the Dubna team in 1987. No spontaneous fission was observed. It was further studied in 1990 by the GSI team. Once again, no atoms were detected and a cross section limit of 21 pb was calculated.

This reaction was first studied in 1990 by the GSI team. No atoms were detected and a cross section limit of 21 pb was calculated.

In September 1994 the team at Dubna detected a single atom of 273Ds, formed in the 5n neutron evaporation channel. The measured cross section was just 400 femtobarns (fb). [13]

As a decay product

Isotopes of darmstadtium have also been detected in the decay of heavier elements. Observations to date are shown in the table below:

In some experiments, the decay of 293Uuh and 289Uuq produced an isotope of darmstadtium decaying by emission of an 8.77 MeV alpha particle with a half-life of 3.7 minutes. Although unconfirmed, it is highly possible that this activity is associated with a meta-stable isomer, namely 281mDs.

The first synthesis of element 114 resulted in two atoms assigned to 288Uuq, decaying to the 280Ds which underwent spontaneous fission. The assignment was later changed to 289Uuq and the darmstadtium isotope to 281Ds. Hence, 280Ds is currently unknown.

In the claimed synthesis of 293Uuo in 1999, the isotope 277Ds was identified as decaying by 10.18 MeV alpha emission with a half-life of 3.0 ms. This claim was retracted in 2001. This isotope was finally created in 2010 and its decay data supported the fabrication of previous data.[14]

In the synthesis of 277Cn in 1996 by GSI (see copernicium), one decay chain proceeded via 273Ds which decayed by emission of a 9.73 MeV alpha particle with a lifetime of 170 ms. This would have been assigned to an isomeric level. This data could not be confirmed and thus this isotope is currently unknown or unconfirmed.

In the first attempt to synthesize darmstadtium, a 10 ms SF activity was assigned to 272Ds in the reaction 232Th(44Ca,4n). Given current understanding regarding stability, this isotope has been retracted from the Table of Isotopes.

The production of 281Ds by the decay of 289Uuq or 293Uuh has produced two very conflicting decay modes. The most common and readily confirmed mode is SF with a half-life of 11 s. A much rarer and hitherto unconfirmed mode is alpha decay by emission of an 8.77 MeV alpha particle with an observed half-life of ~3.7 m. This decay is associated with a unique decay pathway from the parent nuclides and must be assigned to an isomeric level. The half-life suggests that it must be assigned to an isomeric state but further research is required to confirm these reports.

Decay data from the direct synthesis of 271Ds clearly indicates the presence of two alpha groups. The first has alpha lines at 10.74 and 10.69 MeV with a half-life of 1.63 ms. The other has a single alpha line at 10.71 MeV with a half-life of 69 ms. The first has been assigned to the ground state and the latter to an isomeric level. It has been suggested that the closeness of the alpha decay energies indicates that the isomeric level may decay primarily by delayed gamma emission to the ground state, resulting in an identical measured alpha energy and a combined half-life for the two processes. 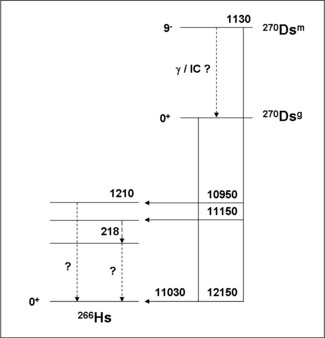 This is the current partial decay level scheme for 270Ds proposed following the work of Hofmann et al. in 2000 at GSI

Fission of compound nuclei with Z=110

Experiments have been performed in 2004 at the Flerov Laboratory of Nuclear Reactions in Dubna studying the fission characteristics of the compound nucleus 280Ds. The nuclear reaction used is 232Th+48Ca. The result revealed how nuclei such as this fission predominantly by expelling closed shell nuclei such as 132Sn (Z=50, N=82).[16]

Theoretical calculation in a quantum tunneling model reproduces the experimental alpha decay half live data.[17][18] It also predicts that the isotope 294110 would have alpha decay half-life of the order of 311 years.[19][20]

The below table contains various targets-projectile combinations for which calculations have provided estimates for cross section yields from various neutron evaporation channels. The channel with the highest expected yield is given.

Darmstadtium is projected to be the eighth member of the 6d series of transition metals and the heaviest member of group 10 in the Periodic Table, below nickel, palladium and platinum. The highest confirmed oxidation state of +6 is shown by platinum whilst the +4 state is stable for both elements. Both elements also possess a stable +2 state. Darmstadtium is therefore predicted to show oxidation states +6, +4, and +2.

High oxidation states are expected to become more stable as the group is descended, so darmstadtium is expected to form a stable hexafluoride, DsF6, in addition to DsF5 and DsF4. Halogenation should result in the formation of the tetrahalides, DsCl4, DsBr4, and DsI4.

Like other Group 10 elements, darmstadtium can be expected to have notable hardness and catalytic properties.