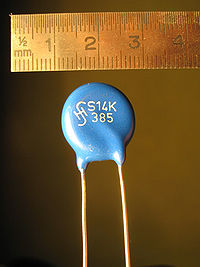 A varistor is an electronic component with a "diode-like" nonlinear current–voltage characteristic. The name is a portmanteau of variable resistor. Varistors are often used to protect circuits against excessive transient voltages by incorporating them into the circuit in such a way that, when triggered, they will shunt the current created by the high voltage away from the sensitive components. A varistor is also known as Voltage Dependent Resistor or VDR. A varistor’s function is to conduct significantly increased current when voltage is excessive.

The most common type of varistor is the metal-oxide varistor (MOV). This contains a ceramic mass of zinc oxide grains, in a matrix of other metal oxides (such as small amounts of bismuth, cobalt, manganese) sandwiched between two metal plates (the electrodes). The boundary between each grain and its neighbour forms a diode junction, which allows current to flow in only one direction. The mass of randomly oriented grains is electrically equivalent to a network of back-to-back diode pairs, each pair in parallel with many other pairs. When a small or moderate voltage is applied across the electrodes, only a tiny current flows, caused by reverse leakage through the diode junctions. When a large voltage is applied, the diode junction breaks down due to a combination of thermionic emission and electron tunneling, and a large current flows. The result of this behavior is a highly-nonlinear current-voltage characteristic, in which the MOV has a high resistance at low voltages and a low resistance at high voltages.

A varistor remains non-conductive as a shunt-mode device during normal operation when the voltage across it remains well below its "clamping voltage", so varistors are typically used to suppress line voltage surges. However, a varistor may not be able to successfully limit a very large surge from an event such as a lightning strike where the energy involved is many orders of magnitude greater than it can handle. Follow-through current as a result of a strike may generate excessive current that completely destroys the varistor. Lesser surges still degrade it, however. Degradation is defined by manufacturer's life-expectancy charts that relate current, time and number of transient pulses. The main parameter affecting varistor life expectancy is its energy (Joule) rating. As the energy rating increases, its life expectancy typically increases exponentially, the number of transient pulses that it can accommodate increases and the "clamping voltage" it provides during each transient decreases. The probability of catastrophic failure can be reduced by increasing the rating, either by using a single varistor of higher rating or by connecting more devices in parallel. A varistor is typically deemed to be fully degraded when its "clamping voltage" has changed by 10%. In this condition it is not visibly damaged and it remains functional (no catastrophic failure).

In general, the primary case of varistor breakdown is localized heating caused as an effect of thermal runaway. This is due to a lack of conformity in individual grain-boundary junctions, which leads to the failure of dominant current paths under thermal stress. If the energy in a transient pulse (normally measured in joules) is too high, the device may melt, burn, vaporize, or otherwise be damaged or destroyed. This (catastrophic) failure occurs when "Absolute Maximum Ratings" in manufacturer's datasheet are significantly exceeded.

To protect communications lines (such as telephone lines) transient suppression devices such as 3 mil carbon blocks (IEEE C62.32), ultra-low capacitance varistors or avalanche diodes are used. For higher frequencies such as radio communication equipment, a gas discharge tube (GDT) may be utilized.

A typical surge protector power strip is built using MOVs. A cheapest kind may use just one varistor, from hot (live, active) to neutral. A better protector would contain at least three varistors; one across each of the three pairs of conductors (hot-neutral, hot-ground, neutral-ground). A power strip protector in the United States should have a UL1449 3rd edition approval so that catastrophic MOV failure would not create a fire hazard. 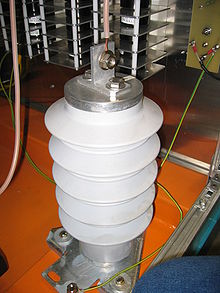 The response time of the MOV is largely ambiguous, as no standard has been officially defined. The sub-nanosecond MOV response claim is based on the material's intrinsic response time, but will be slowed down by other factors such as the inductance of component leads and the mounting method. That response time is also qualified as insignificant when compared to a transient having an 8 µs rise-time, thereby allowing ample time for the device to slowly turn-on. When subjected to a very fast, <1 ns rise-time transient, response times for the MOV are in the 40-60 ns range.[1]

While a MOV is designed to conduct significant power for very short durations (about 8 to 20 microseconds), such as caused by lightning strikes, it typically does not have the capacity to conduct sustained energy. Under normal utility voltage conditions, this is not a problem. However, certain types of faults on the utility power grid can result in sustained over-voltage conditions. Examples include a loss of a neutral conductor or shorted lines on the high voltage system. Application of sustained over-voltage to a MOV can cause high dissipation, potentially resulting in the MOV device catching fire. The National Fire Protection Association (NFPA) has documented many cases of catastrophic fires that have been caused by MOV devices in surge suppressors, and has issued bulletins on the issue.[citation needed]

A series connected thermal fuse is one solution to catastrophic MOV failure. Varistors with internal thermal protection are also available.

There are several issues to be noted regarding behavior of transient voltage surge suppressors (TVSS) incorporating MOVs under over-voltage conditions. Depending on the level of conducted current, dissipated heat may be insufficient to cause failure, but may degrade the MOV device and reduce its life expectancy. If excessive current is conducted by a MOV, it may explode inside the case, keeping the load connected, but now without any surge protection.[dubious – discuss] A user may have no indication when the surge suppressor has failed. Under the right conditions of over-voltage and line impedance, it may be possible to cause the MOV to burst into flames, the root cause of many fires and the main reason for NFPA’s concern.[citation needed] Properly designed TVSS devices should contain the flames, eventually resulting in the opening of a safety fuse.[citation needed]

What varistors don't do

A MOV inside a TVSS device does not provide equipment with complete power protection. In particular, a MOV device provides no protection for the connected equipment from sustained over-voltages that may result in damage to that equipment as well as to the protector device.

A varistor provides no equipment protection from inrush current surges (during equipment startup), from overcurrent (created by a short circuit), or from voltage sags (also known as a brownout); it neither senses nor affects such events. Susceptibility of electronic equipment to these other power disturbances is defined by other aspects of the system design, either inside the equipment itself or externally by means such as a UPS, a voltage regulator or a surge protector with built-in overvoltage protection (which typically consists of a voltage-sensing circuit and a relay for disconnecting the AC input when the voltage reaches a danger threshold).

Varistors compared to other transient suppressors

Another method for suppressing voltage spikes is the transient voltage suppression diode (TVS). Although diodes do not have as much capacity to conduct large surges as MOVs, diodes are not degraded by smaller surges and can be implemented with a lower "clamping voltage". MOVs degrade from repeated exposure to surges[2] and generally have a higher "clamping voltage" so that leakage does not degrade the MOV. Both types are available over a wide range of voltages. MOVs tend to be more suitable for higher voltages, because they can conduct the higher associated energies at less cost.[3]

Another type of transient suppressor is the gas-tube suppressor. This is a type of spark gap that may use air or an inert gas mixture and often, a small amount of radioactive material such as Ni-63, to provide a more consistent breakdown voltage and reduce response time. Unfortunately, these devices may have higher breakdown voltages and longer response times than varistors. However, they can handle significantly higher fault currents and withstand multiple high-voltage hits (for example, from lightning) without significant degradation.