UL is one of several companies approved for such testing by the U.S. federal agency Occupational Safety and Health Administration (OSHA). OSHA maintains a list of approved testing laboratories, known as Nationally Recognized Testing Laboratories. 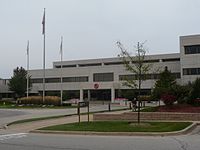 Merrill soon went to work developing standards, launching tests, designing equipment and uncovering hazards. Aside from his work at UL, Merrill served as the National Fire Protection Association’s secretary-treasurer (1903–1909) and president (1910–1912) and was an active member of the Chicago Board and Union Committee. In 1916, Merrill became UL’s first president.

UL published its first standard, “Tin Clad Fire Doors,” in 1903. The following year, the UL Mark made its debut with the labeling of a fire extinguisher. In 1905, UL established a Label Service for certain product categories that require more frequent inspections. UL inspectors conducted the first factory inspections on labeled products at manufacturers’ facilities—a practice that remains a hallmark of UL’s testing and certification program.

UL has expanded into an organization with 64 laboratory, testing and certification facilities serving customers in 98 countries.[1] It has also evolved from its roots in electrical and fire safety to address broader safety issues, such as hazardous substances, water quality, food safety, performance testing and environmental sustainability.

On August 28, 2007, the nonprofit and tax-exempt UL announced that its Board of Trustees had resolved to develop a for-profit testing and certification subsidiary.[3]

The parent nonprofit company will continue to develop safety standards—with the for-profit subsidiary intended to generate money to be used for this work. The for-profit part of the business promotes the sales of standards developed by the nonprofit part. [4]