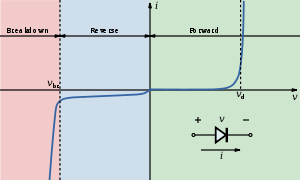 A current–voltage characteristic is a relationship, typically represented as a chart or graph, between an electric current and a corresponding voltage, or potential difference. 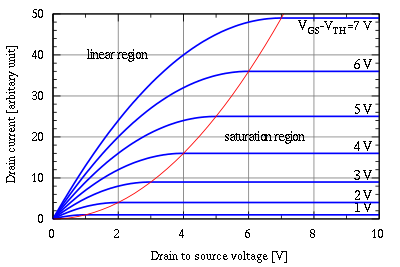 Figure 2. MOSFET drain current vs. drain-to-source voltage for several values of the overdrive voltage, VGS − Vth; the boundary between linear (Ohmic) and saturation (active) modes is indicated by the upward curving parabola

In electronics, the relationship between the direct current (DC) through an electronic device and the DC voltage across its terminals is called a current–voltage characteristic of the device. Electronic engineers use these charts to determine basic parameters of a device and to model its behavior in an electrical circuit. These characteristics are also known as I-V curves, referring to the standard symbols for current and voltage.

A more general form of current–voltage characteristic is one that describes the dependence of a terminal current on more than one terminal voltage difference; electronic devices such as vacuum tubes and transistors are described by such characteristics.[1]

Figure 1 shows an I–V curve for a P-N junction diode. Figure 2 shows a family of I–V curves for a MOSFET as a function of drain voltage with overvoltage (VGS-Vth) as a parameter.

The simplest I–V characteristic involves a resistor, which according to Ohm's Law exhibits a linear relationship between the applied voltage and the resulting electric current. However, even in this case environmental factors such as temperature or material characteristics of the resistor can produce a non-linear curve.

The transconductance and Early voltage of a transistor are examples of parameters traditionally measured with the assistance of an I–V chart, or laboratory equipment that traces the charts in real time on an oscilloscope. 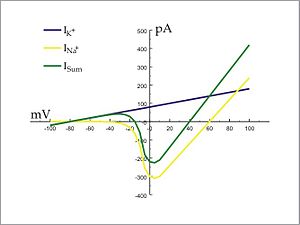 Figure 3. An approximation of the potassium and sodium ion components of a so-called "whole cell" I–V curve of a neuron.

While I–V curves are applicable to any electrical system, they find wide use in the field of biological electricity, particularly in the sub-field of electrophysiology. In this case, the voltage refers to the voltage across a biological membrane, a membrane potential, and the current is the flow of charged ions across channels in this membrane. The current is determined by the conductances of these channels.