Compounds of zinc are chemical compounds containing the element zinc which is a member of the group 12 of the periodic table. The oxidation state of most compounds is the group oxidation state of +2. Zinc may be classified as a post-transition main group element with zinc(II) having much chemical behaviour in common with copper(II). Many salts of zinc(II) are isomorphous with salts of magnesium(II) due to the ionic radii of the cations being almost the same. Zinc forms many complexes; metallo-proteins containing zinc are widespread in biological systems.[1][2][3][4]

Zinc atoms have an electronic configuration of [Ar]3d104s2. When compounds in the +2 oxidation state are formed the s electrons are lost, so the bare zinc ion has the electronic configuration [Ar]3d10. This allows for the formation of four covalent bonds by accepting four electron pairs and thus obeying the octet rule. The stereochemistry is tetrahedral and the bonds may be described as being formed from sp3 hybrid orbitals on the zinc ion. Examples occur in the oxide, ZnO, (calamine) and sulfide, ZnS, (zinc blende) in which the oxide and sulfide ions are also tetrahedrally bound to four zinc ions. Many complexes, such as ZnCl42-, are tetrahedral. Tetrahedrally coordinated zinc is found in metallo-enzymes such as carbonic anhydrase. However 6-coordinate complexes can also be formed by using empty 4d orbitals to form sp3d2 hybrid orbitals. The ion [Zn(H2O)6]2+, which is present when a zinc salt is dissolved in water, has an octahedral structure.

Many zinc(II) salts are isomorphous (have the same type of crystal structure) with the corresponding salts of magnesium(II) which results from the fact that Zn2+ and Mg2+ have almost identical ionic radii. This comes about because of the d-block contraction. Whilst calcium is somewhat larger than magnesium, there is a steady decrease in size as atomic number increases from calcium to zinc. By chance it is the ionic radius of zinc that is almost equal to that of magnesium. In most other respects the chemistry of zinc(II) most closely resembles the chemistry of copper(II), its neighbour in the periodic table, in which there is less electron. However, whereas Cu2+ is classed as a transition metal ion by virtue of its electronic configuration, [Ar]3d9, in which there is an incomplete d-shell, Zn2+ is best considered to be an ion of a post-transition main group element. The IUPAC periodic table places zinc in the d-block.

Some compounds with zinc in the oxidation state +1 are known.[5] The compounds have the formula RZn2R and they contain a Zn — Zn bond analogous to the metal-metal bond in mercury(I) ion, Hg22+. In this respect zinc is similar to magnesium where low valent compounds containing a Mg — Mg bond have been characterised.[6]

No compounds of zinc in oxidation states other than +1 or +2 are known. Calculations indicate that a zinc compound with the oxidation state of +4 is unlikely to exist.[7] Although higher oxidation states are more stable with the heavier elements of a group, the compound HgF4 was only characterized at 4 K in a neon/argon matrix.[8]

Zinc compounds, like those of main group elements, are mostly colourless. Exceptions occur when the compound contains a coloured anion or ligand. Zinc selenide, ZnSe, however, is yellow, due to charge-transfer transitions and zinc telluride, ZnTe is brown for the same reason. Zinc oxide turns yellow when heated due to the loss of some oxygen atoms and formation of a defect structure.

Compounds containing zinc and no other metal are all diamagnetic.

Reactivity of the metal

Zinc is a strong reducing agent with a standard redox potential of -0.76 V. Pure zinc tarnishes rapidly in air, eventually forming a passive layer of basic zinc carbonate, Zn5(OH)6CO3.[9] The reaction of zinc with water is prevented by the passive layer. When this layer is penetrated by acids such as hydrochloric acid and sulfuric acid the reaction proceeds with the evolution of hydrogen gas.[1][10]

The hydrogen ion is reduced by accepting an electron from the reducing agent. The zinc metal is oxidised. Amalgamation with mercury, as in the Jones reductor also destroys the passive layer. Zinc reacts with alkalis as with acids. It reacts directly with oxidising non-metals such as chalcogens and halogens to form binary compounds. 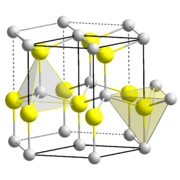 The Wurtzite structure, showing the tetrahedral environment of both Zn and S atoms 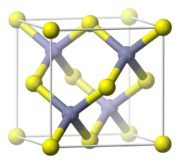 a unit cell of zinc blende

Zinc oxide, ZnO, is the most important manufactured compound of zinc, with a wide variety of uses.[2] It crystallizes with the Wurtzite structure. It is amphoteric, dissolving in acids to give the aqueous Zn2+ ion and in alkali to give the tetrahedral hydroxo complex, [Zn(OH)4]2-. Zinc hydroxide, Zn(OH)2 is also amphoteric.

Zinc sulfide, ZnS, crystallizes in two closely related structures, the Zinc blende structure and the Wurtzite structure which are common structures of compounds with the formula MA. Both Zn and S are tetrahedrally coordinated by the other ion. A useful property of ZnS is its phosphorescence.The other chalcogenides, ZnSe, and ZnTe, have applications in electronics and optics.[11]

Of the four halides ZnF2 has the most ionic character, whereas the others, ZnCl2, ZnBr2, and ZnI2, have relatively low melting points and are considered to have more covalent character.[2] The pnictogenides Zn3N2 (notable for its high melting point[12]), Zn3P2, Zn3As2 and Zn3Sb2, have various applications.[13] Other binary compounds of zinc include the peroxide ZnO2, the hydride ZnH2, and the carbide ZnC2.[14]

The nitrate Zn(NO3)2 (used as oxidizing agent, the chlorate Zn(ClO3)2, the sulfate ZnSO4 (known as "white vitriol"), the phosphate Zn3(PO4)2 (used as primer pigment), the molybdate ZnMoO4 (used as white pigment), , the chromate ZnCrO4 (one of the few colored zinc compounds), the arsenite Zn(AsO2)2 (colorless powder) and the arsenate octahydrate Zn(AsO4)2•8H2O (white powder, also referred to as koettigite are a few examples of other common inorganic compounds of zinc. The latter two compounds are both used in insecticides and wood preservatives.[15] One of the simplest examples of an organic compound of zinc is the acetate Zn(O2CCH3)2, which has several medicinal applications. Zinc salts are usually fully dissociated in aqueous solution. Exceptions occur when the anion can form a complex, such as in the case of zinc sulfate, where the complex [Zn(H2O)n(SO4] may be formed, (log K = ca. 2.5).[16] 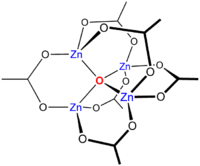 The most common structure of zinc complexes is tetrahedral which is clearly connected with the fact that the octet rule is obeyed in these cases. Nevertheless, octahedral complexes comparable to those of the transition elements are not rare. Zn2+ is a class A acceptor in the classification of Ahrland, Chatt and Davies,[17] and so forms stronger complexes with the first-row donor atoms oxygen or nitrogen than with second-row sulfur or phosphorus. In terms of HSAB theory Zn2+ is a hard acid.

In aqueous solution an octahedral complex, [Zn(H2O)6]2+ is the predominant species.[18] Aqueous solutions of zinc salts are mildly acidic because the aqua-ion is subject to hydrolysis with a pKaof around 5, depending on conditions.[19]

Hydrolysis explains why basic salts such as basic zinc acetate and basic zinc carbonate, Zn3(OH)4(CO3).H2O are easy to obtain. The reason for the hydrolysis is the high electrical charge density on the zinc ion, which pulls electrons away from an OH bond of a coordinated water molecule and releases a hydrogen ion. The polarizing effect of Zn2+ is part of the reason why zinc is found in enzymes such as carbonic anhydrase.

Structure of a monomeric zinc dialkyldithiophosphate

No fluoro complexes are known, but complexes with the other halides and with pseodohalides, [ZnX3]- and [ZnX4]2- can be prepared. The case of the thiocyanate complex illustrates the class A character of the zinc ion as it is the N-bonded isomer, [Zn(NCS)4]2-in contrast to [Cd(SCN)4]2- which is S-bonded. Being a class-A acceptor does not preclude the formation of complexes with sulfur donors, as is shown by zinc dithiophosphate and the zinc finger complex (below).

The acetylacetonate complex, Zn(acac)2 is interesting. As the ligand is bidentate a tetrahedral structure might be expected. However, the compound is in fact a trimer, Zn3(acac)6 in which each Zn ion is coordinated by five oxygen atoms in a distorted trigonal bipyramidal structure.[2] Other 5-coordinate structures can be engineered by choosing ligands which have specific stereochemical requirements. For example, terpyridine, which is a tridentate ligand forms the complex [Zn(terpy)Cl2]. Another example would involve a tripodal ligand such as Tris(2-aminoethyl)amine. The compound zinc cyanide, Zn(CN)2, is not 2-coordinate. It adopts a polymeric structure consisting of tetrahedral zinc centres linked by bridging cyanide ligands. The cyanide group shows head to tail disorder with any zinc atom having between 1 and 4 carbon atom neighbours and the remaining being nitrogen atoms. These two examples illustrate the difficulty of sometimes relating structure to stoichiometry. 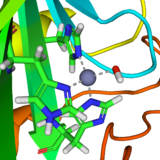 A very large number of metallo-enzymes contain zinc(II). Also many proteins contain zinc for structural reasons. The zinc ion is invariably 4-coordinate with at least three ligands that are amino-acid side-chains. The imidazole nitrogen of a histidine side-chain is a common ligand. The following are typical examples of the two kinds of zinc-protein complexes.

In the active site of resting Carbonic anhydrase a zinc ion is coordinated by three histidine residues. The fourth position is occupied by a water molecule, which is strongly polarized as in hydrolysis (see above). When carbon dioxide enters the active site, it subject to nucleophilic attack by the oxygen atom which carries a partial negative charge, or indeed a full negative charge if the water molecule is dissociated. The CO2 is rapidly converted into a bicarbonate ion.[21]

Some peptidases , such as Glutamate carboxypeptidase II are thought to act in a similar way, with the zinc ion promoting the formation of a nucleophilic reagent.[21]

The zinc finger motif is a rigid substructure in a protein which facilitates the binding of the protein to another molecule such as DNA.[22] In this case all four coordination positions are occupied by the hystidine and cysteine residues. The tetrahedral geometry around the zinc ion constrains an α helix fragment and an antiparallel β sheet fragment to a particular orientation with respect to each other.

The magnesium ion, which has a higher concentration in biological fluids, cannot perform these functions as its complexes are much weaker than those of zinc.

Organozinc compounds contain zinc—carbon covalent bonds. Diethylzinc ((C2H5)2Zn) was first reported in 1848. It was made by reaction of zinc and ethyl iodide and is the first compound known to contain a metal—carbon sigma bond.[23] For a long time it was a mystery why copper(II) did not form an analogous compound. It was not until the 1980s that the reason was found: the zinc compound does not undergo the Beta-hydride elimination reaction whereas the compound of the transition metal copper does so. Alkyl and aryl zinc compounds are contain the linear C—Zn—C motif. Because the zinc centre is coordinatively unsaturated the compound are powerful electrophiles. In fact the low-molecular weight compounds will ignite spontaneously on contact with air and are immediately destroyed by reaction with water molecules. The use of zinc alkyls has been largely superseded by the use of the more easily handled Grignard reagents. This demonstrates yet another connection between the chemistries of zinc and magnesium.

Zinc cyanide, Zn(CN)2, is used as a catalyst in some organic reactions.[24]