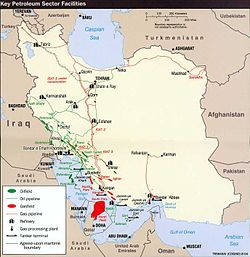 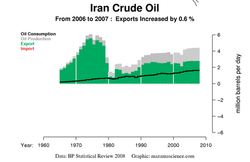 The National Iranian Oil Company (Persian: شرکت ملی نفت ایران, Sherkat Melli Naft'e Iran), a government-owned corporation under the direction of the Ministry of Petroleum of Iran, is an oil and natural gas producer and distributor headquartered in Tehran. It was established in 1948.[3] NIOC ranks as the world's second largest oil company, after Saudi Arabia's state-owned Aramco.[4]

The NIOC is exclusively responsible for the exploration, extraction, transportation and exportation of crude oil, as well as sales of natural gas and liquefied natural gas (LNG). Having provided the domestic refineries and manufacturing plants with crude oil required for the petroleum products, the NIOC exports its surplus production according to commercial considerations in the framework of the quotas determined by the Organization of Petroleum Exporting Countries (OPEC) and at the prices prevalent in the international markets. The NIOC also signs some long term contracts on "buy-back" basis with foreign companies in order to exploit national oil fields and export its products. The NIOC exports natural gas and liquefied natural gas via the "National Iranian Gas Export Company" which is one of its subsidiaries.[3]

Current NIOC production capacities include over 4 million barrels (640×10^3 m3) of crude oil and in excess of 500 million cubic meters of natural gas per day.[3] In 2008, the average extraction cost of oil was less than $5 per barrel. This does not include processing (refining) and distribution costs.[6]

Iran's overall export crude oil was valued at US$85 billion in 2010.

National Iranian Oil Company was established in 1948 under the reign of Mohammed Reza Shah Pahlavi and prime ministership of Saed. Then Prime Minister Mohammad Mossadegh was entrusted 1951 with the nationalisation of the Anglo-Iranian Oil Company. Following the 1953 coup that overthrew Mossadegh it became a consortium of international oil companies: 40% owned by Anglo-Iranian holding, five American companies holding 40%, and the Royal Dutch/Shell and Compagnie Francaise de Petroles holding 10% each. The consortium shared profits 50-50 with Iran but did "not to open its books to Iranian auditors or to allow Iranians onto its board of directors."[8] According to the company's Web site: The victory of the Islamic revolution annulled the Consortium Agreement of 1954 and all regulations pertaining to it. The taking of power by the Islamic Republic led to the withdrawal of foreign employees from Iran's oil industry; domestic employees took full control of its affairs.[9]

After 2003 Iran has made some significant discoveries which lead to addition of another 7.7 billion barrels (1.22×109 m3) of oil to the recoverable reserves of Iran.[10]

The vast majority of Iran's crude oil reserves are located in giant onshore fields in the south-western Khuzestan region near the Iraqi border. Overall, Iran has 40 producing fields – 27 onshore and 13 offshore. Iran's crude oil is generally medium in sulfur and in the 28°-35 °API range.

The company is completely owned by Iranian government. NIOC's General Assembly consists of:

It is its highest decision marking body, determining the company's general policy guide lines, and approving the annual budgets, operations and financial statements and balance sheets. The company's Board of Directors has the authority and major responsibilities to approve the operational schemes within the general framework ratified by the General Assembly, approve transactions and contracts, and prepare budgets and Board reports and annual balance sheets for presentation to the General Assembly.

The Board supervises the implementation of general policy guidelines defined by the General Assembly, and pursues executive operations via the company's Managing Director.

See also: Privatization of the petroleum industry in Iran

With appropriate division of tasks and delegation of responsibilities to subsidiaries- affiliates, NIOC has been able to establish acceptable degrees of coordination within its organizational set up. In fact, NIOC's Directors act primarily in policy making and supervision while subsidiaries act as their executive arm in coordinating an array of operations such as exploration, drilling, production and delivery of crude oil and natural gas, for export and domestic consumption.

The NIOC's subsidiaries are as follows:

Although usually neglected and overlooked, Iran also has a number of very active private companies in the oil sector. The growing private sector activity is mainly active in projects involving the construction of oil field units, refinery equipment, tanks and pipelines, as well as engineering.