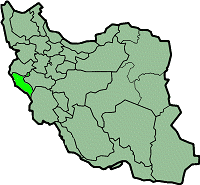 Ilam province is among the warmer regions of Iran. The mountainous areas of north and north eastern Ilam are relatively cold however. Average annual rainfall in the province is 578 mm.

In 1996, absolute maximum temperature was 38 °C in August and the minimum temperature recorded was 0.4 °C in February. The number of freezing days in winter was 27 days.

Ilam's highest point is the peak at 2790 m, part of the mountains.

The population of Ilam City is predominantly Kurdish, while the population of Ilam Province is dominated by Lurs. Lurs are mostly living in the southern and eastern parts of the province; for example: Abdanan, Darreshahr, Dehloran and Mehran. The northern part of the province is mostly inhabited by Kurdish tribes who speak with two dialects: and . The majority are , such as of , () , and . [ [http://i-cias.com/e.o/ilam.htm LookLex Encyclopaedia] , retrieved 1 Feb 2008] Most are Shi'a Muslims. [ [http://i-cias.com/e.o/ilam.htm LookLex Encyclopaedia] , retrieved 1 Feb 2008]

Limited archaeological studies and discoveries indicate 6,000 years of tribal residence in Ilam. Historical evidence indicates that Ilam province was part of the ancient .

In Elamite and Babylonian inscriptions, Ilam is called Alamto or Alam which means "mountains" or "the country of sunrise".By immigration of and establisment of kingdoms Ilam became a part of their teritory. It was also part of the Achaemenid Empire. Existence of numerous historical vestiges in Lurestan and Ilam provinces belonging to the period indicates the specific importance of the region in that time.In this period Ilam province was divided into two regions, in the eastern part and at the western part.

In the late 11th century, governed the region till the early 13th century.

In 1930, in the division of the country, Ilam became a part of province, only later to become a province by itself. Ilam is still a tribal province in many ways, but in recent years the tribal relations have changed drastically.

During the , Ilam province took a heavy pounding, and Iraq's intense bombings left no economic infrastructure for the province. Ilam has thus been one of Iran's more undeveloped provinces. Ilam's unemployment rate was 19.9% in 2003.

Only in recent years has the central government began investing in advanced industries like Petrochemical facilities with Japanese help, in Ilam. Ilam also has a bright future in the tourist sector, with 174 historical sites listed under , though it also remains undeveloped.