In Islamic law (sharia), marriage (zawaj زواج) is a legal bond and social contract between a man and a woman. Islam commends marriage, with the age of marriage being whenever the individuals feel ready, financially and emotionally. Polygyny is permitted in Islam under some conditions,[1] but polyandry is forbidden.

Nikah (Arabic: نكاح, literally: contract[2]) is the first, and most common, form of marriage for Muslims. It is described in the Qur'an in 4:4.[3] 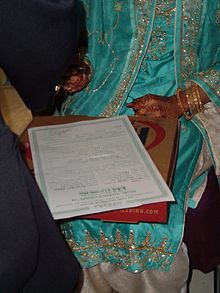 A Muslim bride signing the nikkah nama or marriage certificate.

If an agreed end-date is determined in the Nikah contract:

Nikah mut‘ah (Arabic: نكاح متعة,, temporary marriage[6]), often referred as fixed-time marriage. Many of these marriages have a time limit, and is the second form of marriage, and is referred to in Al-Qur'an in Surah An-Nisa ayat 24, 4:24("اسْتَمْتَعْتُمْ"). There is controversy on the Islamic legality of this type of marriage, since Sunnis believe it was abrogated by Muhammad, while Shi'ia hold to Al-Qur'an and the ruling of Imam Ali (a.s.) that it is lawful in which he said "The first to ban Mut'ah was Omar[7]" and "Were it not for Omar banning Mut'ah only the sickest people would commit fornication.[8]" Nikah mut‘ah has a preset time period to the marriage which is stated during the initiation of the contract. Traditionally the couple do not inherit from each other. The man usually is not responsible for the economic welfare of the woman and she usually may leave her home at her own discretion. For these reasons Sunnis frequently compare this type of marriage to adultery or prostitution. Nikah mut‘ah also does not count toward a maximum of wives (four according to the Qur'an). However, similar to normal marriages that are common among Sunnis and Shi'ias, the woman still is given her mahr,and the woman must still observe the iddah, a period of four months at the end of the marriage where she is not permitted to marry in the case she may have become pregnant before the divorce took place. This maintains the proper lineage of children.

Nikah Misyaar is a Nikah in Sunni's carried out via the normal contractual procedure, with the specificity that the husband and wife give up several rights by their own free will, such as living together, equal division of nights between wives in cases of polygamy, the wife's rights to housing, and maintenance money ("nafaqa"), and the husband's right of homekeeping, and access etc.[9]

Islam allows a man to marry a woman from the People of the Book, that is, Christians and Jews.[10]

Muslim men are allowed to practise polygyny, that is, they can have more than one wife at the same time, up to a total of four, per Sura 4 Verse 3. Polyandry, the practice of a woman having more than one husband, by contrast, is not permitted.

The Quran states: (30:21): “And among His signs is that He has created for you, from your selves, mates, that you may incline towards them and find rest in them, and He has engendered love and tenderness between you. Surely in this are signs for people who reflect.” Polygyny in Islam is permitted. Polyandry, on the other hand, is strictly prohibited. A man does not need approval of his first wife for a second marriage but he has to let her know and she chooses to stay with him or leave him. A man is responsible to make justice among his wives and never hurts one wife to please another.

Traditionally, Muslim jurists hold that Muslim women may only enter into marriage with Muslim men. The Qur'an explicitly allows Muslim men to marry chaste women of the People of the Book, a term which includes Jews and Christians.[11][12]

Some jurists say that Muslim men are prohibited from marrying a woman of the People of the Book if they live in non-Muslim countries.[12]

An engagement may be arranged between families for their children, but Islamic requirements for a legal marriage include the requirement that both parties are able to give informed legal consent (ijab-o-qubul). A marriage without this consent or performed under coercion is considered void and may be annulled on those grounds.

Islam does not give adulterous men the right to marry a chaste woman and nor may an adulterous woman marry a chaste man, except if the matter has not gone to court and the two purify themselves of this sin by sincere repentance.[13][14]

A woman or man may propose marriage directly or through an intermediary (matchmaker).

Recognition or celebration of same sex marriage is completely unjustified in the view of Islamic law. Islam forbids homosexuality in Qur'anic injunctions and Islamic tradition.

A marriage is registered by the Qadi who performs the short ceremony.

Unlike the wedding ring in Western societies, there is no visible sign worn to show a woman or a man is married. However, some Muslims have found the wedding ring to be a non-religious tradition and have used a ring.

Mahr is a mandatory gift given by the groom to the bride. Unlike a bride price, however, it is given directly to the bride and not to her father. Although the gift is often money, it can be anything agreed upon by bride and groom such as a house or viable business that is put in her name and can be run and owned entirely by her if she chooses.

Various traditions may differ in how Nikah is performed because different groups accept different texts as authoritative. Therefore, Sunnis will likely accept the hadith of Muhammad al-Bukhari, while Shia will have their own collections, for example Furu al-Kafi, thus producing different procedures. This contract requires the consent of both parties. There is a tradition, outside of the religion, in some Muslim countries to pre-arrange a marriage for young children. However, the marriage still requires consent for the wedding to legally take place.

Divorce is not forbidden as a last resort, however the dissolution of the contract, Talaq, is often described as the most disliked of permissible things in Islam and should be used as a last resort.

The Walima is a dinner given by the groom's side of the family to celebrate the welcoming of the bride to the family. It is a strong sunnah (the repetition of an action of Muhammad) and it is recommended to be held the earliest possible day after the Nikah.

Rights and obligations of spouses

Main article: Rights and obligations of spouses in Islam

Islam advocates a role-based relationship between husband and wife.

This indicates that a wife is responsible for the house of her husband. Also that a man should be the guardian of his family. i.e. after his marriage he moves out of his father's house, and runs his own family affairs and is guardian of his family. In joint family, typically the head is either the father of the husband, or mother of the husband. This also indicates that a husband should look after his parent's house, as " A man is a guardian of his father's property". So a wife should not object to her husband when he is looking after affairs of his parents.[15]

Sexuality in Islam is largely described by the Qur'an, Islamic tradition, and religious leaders both past and present as being confined to marital relationships between men and women. While most traditions discourage celibacy, all encourage strict chastity and modesty with regards to any relationships across gender lines, holding forth that intimacy as perceived within Islam (encompassing a swath of life more broad than strictly sex) is to be reserved for marriage.

We were with the Prophet while we were young and had no wealth whatever. So Allah's Apostle said, "O young people! Whoever among you can marry, should marry, because it helps him lower his gaze and guard his modesty (i.e., his private parts from committing illegal sexual intercourse etc.), and whoever is not able to marry, should fast, as fasting diminishes his sexual desire."
—Volume 7, Book 62, Number 4:[16]