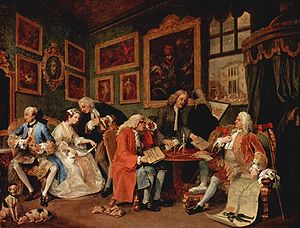 "Marriage à-la-mode" by William Hogarth: a satire on arranged marriages and prediction of ensuing disaster

An arranged marriage is a practice in which someone other than the couple getting married makes the selection of the persons to be wed, meanwhile curtailing or avoiding the process of courtship. Such marriages had deep roots in royal and aristocratic families around the world. Today, arranged marriage is largely practiced in South Asia (India, Pakistan, Bangladesh, Sri Lanka),[1] Africa, the Middle East, and Southeast Asia and East Asia to some extent.[2] Other groups that practice this custom include the Unification Church and Hasidic Jewry. It should not be confused with the practice of forced marriage, in which one person forces another to marry him or her. Arranged marriages are usually seen in Indian, traditional European and African cultures, especially among royalty, and are usually decided by the parents or an older family member. The match could be selected by parents, a matchmaking agent, matrimonial site, or a trusted third party. In many communities, priests or religious leaders as well as relatives or family friends play a major role in matchmaking.

Arranged marriages vary in both nature and duration of time from meeting to engagement. In an "introduction only" arranged marriage, the parents may only introduce their son or daughter to a potential spouse. From that point on, it is up to the children to manage the relationship and make a choice. There is no set time period. This is common in the rural parts of North America,[citation needed] South America and especially in India and Pakistan. The same also appears in Japan. This type of arranged marriage is very common in Iran under the name of khastegary. This open-ended process takes considerably more courage on the part of the parents, as well as the prospective spouses, in comparison to a fixed time-limit arranged marriage. Men and women fear the stigma and emotional trauma of going through a courtship and then being rejected.[citation needed]

A culture of arranged marriage

In cultures where dating is not prevalent, arranged marriages perform a similar function—bringing together people who might otherwise not have met. In such cultures, arranged marriage is viewed as the norm and accepted by young adults.In several cultures, the last duty of a parent to his or her son or daughter is to see that he or she passes through the marital rites.

In some cultures, arranged marriage is a tradition handed down through many generations. Parents who take their son or daughter's marriage into their own hands have themselves been married by the same process. Many parents, and children likewise, feel pressure from the community to conform, and in certain cultures a love marriage or even courtship is considered a failure on the part of the parents to maintain control over their child.

Proponents of arranged marriage often feel that people can quite easily be influenced by emotional infatuation to make an illogical choice.[3] In these societies, the intragenerational relationship of the family is much more valued than the marital relationship. The whole purpose of the marriage is to have a family.[4] Even if the couple does not love each other at first, a greater understanding between the two would develop, aided by their often similar socioeconomic, religious, political, and cultural backgrounds.[5] Proponents may also feel that marriages simply based on romance are doomed to failure due to the partners having unreasonable expectations of each other and with the relationship having little room for improvement.[5]

Furthermore, supporters of arranged marriages believe that parents can be trusted to make a match that is in the best interests of their children. They hold that parents have much practical experience to draw from and not be misguided by emotions and hormones.[5] Opponents will note that there are times when the choosers select a match that serves their interests or the family's interests and not necessarily to the couple’s pleasure and find this naturally unacceptable.[5] However, the community and even the children may see this as an acceptable risk with potential benefits.

In Indian, some of the factors to be considered in some order of priority may be taken into account for the purpose of matchmaking:

Among most Indian and Nepalese Hindus, the hereditary system of caste (Hindi: jâti) is an extremely important factor in arranged marriage. Arranged marriages, and parents, almost always require that the married persons should be of the same caste. Sometimes inter-caste marriage is one of the principal reasons of familial rejection or anger with the marriage. The proof can be seen by the numerous Indian marriage websites on the internet, most of which are by caste. Even within the caste, there is obligation, followed strictly by many communities, to marry (their son/daughter) outside the gotra (sub-caste or clan). It must however be noted that modern India, being a democracy, does not prohibit inter-caste or intra-gotra marriage (by the Hindu Marriage Act). Arranged marriages are less common in the Hindu diaspora outside South Asia, although they have undergone a revival in the United Kingdom among Indian immigrants.[7]

Many Indian families who consider the caste system an artificial excuse for social inequity have the opposite preference. They prefer to marry persons of differing caste and tend to avoid matches within the same caste. It is believed that intercaste marriages weaken the caste system and thus reduce social inequality caused by the caste stratification. Such families are also often open to marriages across national borders.

Similar clan-based arranged marriages have been reported in Mexican communities and Amerindians, particularly among the Triqui, including immigrants in the United States.[8][9][10] Likewise, Fundamentalist Latter Day Saint (FLDS) groups, not to be confused with the LDS Church (Mormons), in the United States also practice arranged marriages by FLDS religious affiliation [9]

Arranged marriages are fairly common in the Muslim world, particularly Pakistan (the second most populous Muslim country), where rituals like Pait Likkhi involve marriage based on clan affiliations.[11]

Arguments for and against arranged marriage

There are several arguments in favour of arranged marriage. Some of the most popular are:

Amongst the arguments against arranged marriage, the most prominent are: