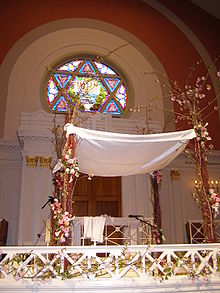 A chuppah at the Sixth & I Synagogue in Washington D.C. 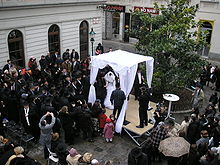 A chuppah (Hebrew: חוּפָּה‎, pl. חוּפּוֹת, chuppot, literally, "canopy" or "covering"), also huppah, chupah, or chuppa, is a canopy under which a Jewish couple stand during their wedding ceremony. It consists of a cloth or sheet, sometimes a tallit, stretched or supported over four poles, or sometimes manually held up by attendants to the ceremony. A chuppah symbolizes the home that the couple will build together. While a Jewish marriage is still considered valid in the absence of a chuppah,[citation needed] a chuppah is still considered a basic requirement for a Jewish wedding.

In a more general sense, chupah refers to the method by which nesuin, the second stage of a Jewish marriage, is accomplished. According to some opinions, it is accomplished by the couple standing under the canopy; however, there are other views.[1][2] 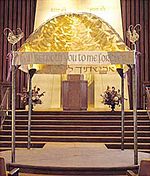 Chuppa at a synagogue in Toronto, Canada

A traditional chuppah, especially within Orthodox Judaism, recommends that there be open sky exactly above the chuppah.[3] If the wedding ceremony is held indoors in a hall, sometimes a special opening is built to be opened during the ceremony. Many Hasidim prefer to conduct the entire ceremony outdoors.

The word chuppah originally appears in the Hebrew Bible (e.g., Joel 2:16; Psalms 19:5). Abraham P. Bloch states that the connection between the term chuppah and the wedding ceremony 'can be traced to the Bible'; however, 'the physical appearance of the chuppah and its religious significance have undergone many changes' since then.[4]

In biblical times, a couple consummated their marriage in a room.[5] In Talmudic times, the room where the marriage was consummated was called the chuppah.[6]

Jewish weddings consist of two separate parts: the betrothal ceremony, known as erusin or kiddushin, and the actual wedding ceremony, known as nisuin. The first ceremony (the betrothal, which is today accomplished when the groom gives a wedding ring to the bride) prohibits the bride to all other men and cannot be dissolved without a religious divorce (get). The second ceremony permits the bride to her husband. Originally, the two ceremonies usually took place separately.[1] After the initial betrothal, the bride lived with her parents until the day the actual marriage ceremony arrived; the wedding ceremony would then take place in a room or tent that the groom had set up for her. After the ceremony the bride and groom would spend an hour together in an ordinary room, and then the bride would enter the chuppah and, after gaining her permission, the groom would join her.[6]

In the Middle Ages these two stages were increasingly combined into a single ceremony (which, from the sixteenth-century, became the 'all but universal Jewish custom'[7]) and the chuppah lost its original meaning, with various other customs replacing it.[7] Indeed, in post-talmudic times the use of the chuppa chamber ceased;[6] the custom that became most common instead was to 'perform the whole combined ceremony under a canopy, to which the term Chuppah was then applied, and to regard the bride's entry under the canopy as a symbol of the consummation of the marriage'.[8] The canopy 'created the semblance of a room'.[6]

There are legal varying opinions as to how the chuppah ceremony is to be performed today. Major opinions include standing under the canopy, and secluding the couple together in a room (yichud)[1]. The bethothal and chuppah ceremonies are separated by the reading of the ketubah.[9]

This chuppah ceremony is connected to the seven blessings which are recited over a cup of wine at the conclusion of the ceremony (birchat nisuin or sheva brachot).

There were for centuries regional differences in what constituted a 'huppah.' Sperber notes that for many communities prior to the 16th Century, the huppah consisted of a veil worn by the bride. In others, it was a cloth spread over the shoulders of the bride and groom (The Jewish Lifecycle, pp. 194-264). Numerous illustrations of Jewish weddings in medieval Europe, North Africa and Italy show no evidence of a huppah as it is known today. Isserles notes that the portable marriage canopy was widely adopted by Ashkenazi Jews as a symbol of the chamber within which marriages originally took place, in the generation before he composed his commentary to the Shulchan Aruch.

The chuppah represents a Jewish home symbolized by the cloth canopy and the four poles. Just as a chuppah is open on all four sides, so was the tent of Abraham open for hospitality. Thus, the chuppah represents hospitality to one's guests. This "home" initially lacks furniture as a reminder that the basis of a Jewish home is the people within it, not the possessions. In a spiritual sense, the covering of the chuppah represents the presence of God over the covenant of marriage. As the kippah served as a reminder of the Creator above all, (also a symbol of separation from God), so the chuppah was erected to signify that the ceremony and institution of marriage has divine origins.[citation needed]

The "chuppah" may also represent the tent of Abraham, which was open on four sides. Hospitality is considered a cornerstone of the Jewish home.

Before going under the chuppah the groom covers the bride's face with a veil, known as the badeken (in Yiddish) or hinuma (in Hebrew). The origin of this tradition is in the dispute of what exactly is the chuppah. There are opinions that the chuppah means covering the bride's face, and that by this covering the couple is to be married. Thus, some insist that the marriage witnesses also see this act of covering, as it is a formal part of the wedding.

The groom enters the chuppah first to represent his ownership of the home on behalf of the couple. When the bride then enters the chuppah it is as though the groom is providing her with shelter or clothing, and he thus publicly demonstrates his new responsibilities toward her.[10]

A chuppah can be made of any material. Silk or quilted chuppot are increasingly common, and can often be customized or personalized to suit the couple's unique interests and occupations.[11]