Religion and happiness have been studied by a number of researchers. The science of positive psychology has identified many components of happiness, and religion seems adapted to satisfy many of them. Some research suggests that both non-religious and religious meaning systems can be quite effective when it comes to managing death anxiety, and that the latter have a few additional advantages. 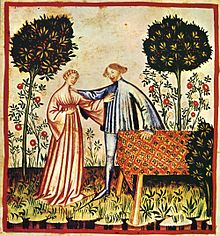 There is now extensive research suggesting that religious people are happier and less stressed.[1][2] There are a number of mechanisms through which religion may make a person happier: social contact and support that result from religious pursuits, the mental activity that comes with optimism and volunteering or learned coping strategies that enhance one's ability to deal with stress, psychological factors such as "reason for being", or some combination of these and/or other factors. It may also be that religious people engage in behaviors related to good health (such as less substance abuse) since the use of psychotropic substances is sometimes considered abuse. On the other hand, Rastafarians and others use cannabis as a religious sacrament (see Religious and spiritual use of cannabis as well as Religion and drugs).[3][4][5][6][7]

The Handbook of Religion and Health describes a survey by Feigelman (1992) who examined happiness in Americans who have given up religion, in which it was found that there was little relationship between religious disaffiliation and unhappiness.[8] A survey by Kosmin & Lachman (1993), also cited in this handbook, indicates that people with no religious affiliation appear to be at greater risk for depressive symptoms than those affiliated with a religion.[9]

The Legatum Prosperity Index reflects the repeated finding of research on the science of happiness that there is a positive link between religious engagement and wellbeing: people who report that God is very important in their lives are on average more satisfied with their lives, after accounting for their income, age and other individual characteristics.[10]

Surveys by Gallup, the National Opinion Research Center and the Pew Organization conclude that spiritually committed people are twice as likely to report being "very happy" than the least religiously committed people.[11] An analysis of over 200 social studies contends that "high religiousness predicts a lower risk of depression and drug abuse and fewer suicide attempts, and more reports of satisfaction with sex life and a sense of well-being,"[12] and a review of 498 studies published in peer-reviewed journals concluded that a large majority of them showed a positive correlation between religious commitment and higher levels of perceived well-being and self-esteem and lower levels of hypertension, depression, and clinical delinquency.[13] A meta-analysis of 34 recent studies published between 1990 and 2001 found that religiosity has a salutary relationship with psychological adjustment, being related to less psychological distress, more life satisfaction, and better self-actualization.[14] Finally, a recent systematic review of 850 research papers on the topic concluded that "the majority of well-conducted studies found that higher levels of religious involvement are positively associated with indicators of psychological well-being (life satisfaction, happiness, positive affect, and higher morale) and with less depression, suicidal thoughts and behavior, drug/alcohol use/abuse."[15]

The studies cited above test only correlation, as opposed to causation; they do not distinguish between various possible explanations. These include the following:

Some researchers suggest there are happiness benefits to being in the majority when it comes to religious belief. Many studies finding correlations between happiness and religiosity come from measuring Religion in the United States - a predominantly Christian country (making the nonreligious a minority). According to a 2007 paper by Liesbeth Snoep, published in the Journal of Happiness Studies, there is no significant correlation between religiosity and individual happiness when researchers measure Religion in the Netherlands and Denmark. These countries have lower rates of religious affiliation than the United States, meaning the non-religious are not the vast minority - a fact that Snoep thinks might help explain the different correlations. This might suggest that religious people are happier because they are simply satisfying various other criteria for happiness.[16] According to the Gallup World Poll survey conducted between 2005 and 2009 Denmark is the happiest country in the world, and the Netherlands rank fourth.[17]

Terror management theory maintains that people suffer cognitive dissonance (anxiety) when they are reminded of their inevitable death. Through terror management, individuals are motivated to seek consonant elements - symbols which make sense of mortality and death in satisfactory ways (i.e. boosting self-esteem). Research has found that strong belief in religious or secular meaning systems affords psychological security and hope. It is moderates (e.g. agnostics, slightly religious individuals) who likely suffer the most anxiety from their meaning systems. Religious meaning systems are especially adapted to manage death anxiety because they are unlikely to be disconfirmed (for various reasons), they are all encompassing, and they promise literal immortality.[18][19] Citizens of the world's poorest countries are the most likely to be religious, and researchers suggest this is because of religion's powerful coping abilities.[20][21]