The world's principal religions and spiritual traditions may be classified into a small number of major groups, although this is by no means a uniform practice. This theory began in the 18th century with the goal of recognizing the relative levels of civility in non-European societies.[1] 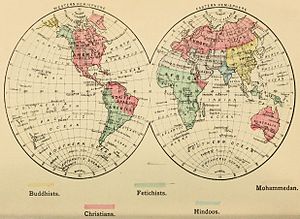 In world cultures, there have traditionally been many different groupings of religious belief. In Indian culture, different religious philosophies were traditionally respected as academic differences in pursuit of the same truth. In Islam, the Qur'an mentions three different categories: Muslims, the People of the Book, and idol worshipers. Initially, Christians were aware of a number of competing belief systems that were current then, including various other sects of Judaism, Roman state paganism, Zoroastrianism, Mithraism, etc.; Church fathers of the early centuries also spoke out against "heresies" associated with Christianity, such as Montanism or Arianism. In the 18th century, following the Protestant Reformation, there were attempts to extend "heresy" to include Judaism and Islam; along with paganism, this created a fourfold classification discernible in such works as John Toland's Nazarenus, or Jewish, Gentile, and Mahometan Christianity, which represented the three Abrahamic traditions as different "nations" or sects within religion itself, the true monotheism.

Daniel Defoe described the original definition as follows: "Religion is properly the Worship given to God, but 'tis also applied to the Worship of Idols and false Deities." At the turn of the 19th century, in between 1780 and 1810, the language dramatically changed: instead of "religion" being synonymous with spirituality, authors began using the plural, "religions", to refer to both Christianity and other forms of worship. Therefore, Hannah Adams's early encyclopedia, for example, had its name changed from An Alphabetical Compendium of the Various Sects... to A Dictionary of All Religions and Religious Denominations.[2]

In 1838, the four-way division of Christianity, Judaism, "Mahommedanism" and Paganism was multiplied considerably by Josiah Conder's Analytical and Comparative View of All Religions Now Extant among Mankind. Conder's work still adheres to the four-way classification, but in his eye for detail he puts together much historical work to create something resembling our modern Western image: he includes Druze, Yezidis, Mandeans, and Elamites under a list of possibly monotheistic groups, and under the final category, of "polytheism and pantheism", he lists Zoroastrianism, "Vedas, Puranas, Tantras, Reformed sects" of India as well as "Brahminical idolatry", Buddhism, Jainism, Sikhism, Lamaism, "religion of China and Japan", and "illiterate superstitions".[3]

Even through the late 19th century, it was common for Christians to view these "pagan" sects as dead traditions which preceded Christianity, "the final, complete word of God". This in no way reflected the reality of religious experience: Christians supposed these traditions to have maintained themselves in an unchanging state since whenever they were "invented", but actually all traditions survived in the words and deeds of people, some of whom could make radical new inventions without needing to create a new sect. The biggest problem in this approach was the existence of Islam, a religion which had been "founded" after Christianity, and which had been experienced by Christians as intellectual and material prosperity. By the 19th century, however, it was possible to dismiss Islam as a revelation of "the letter, which killeth", given to savage desert nomads.[4]

The modern meaning of the phrase "world religion", putting non-Christians at the same, living level as Christians, began with the 1893 Parliament of the World's Religions in Chicago, Illinois. This event was sharply criticized by European Orientalists up until the 1960s as "unscientific", because it allowed religious leaders to speak for themselves instead of bowing to the superior knowledge of the Western academic. As a result its approach to world religions was not taken seriously in the scholarly world for some time. Nevertheless, the Parliament spurred the creation of a dozen privately funded lectures with the intent of informing people of the diversity of religious experience: these lectures funded researchers such as William James, D.T. Suzuki, and Alan Watts, who greatly influenced the public conception of world religions.[5]

In the latter half of the 20th century, the category of "world religion" fell into serious question, especially for drawing parallels between vastly different cultures, and thereby creating an arbitrary separation between the religious and the secular.[6] Even history professors have now taken note of these complications and advise against teaching "world religions" in schools.[7] Others see the shaping of religions in the context of the nation-state as the "invention of traditions.

Religious traditions fall into super-groups in comparative religion, arranged by historical origin and mutual influence. Abrahamic religions originate in the Middle East, Indian religions in India and Far Eastern religions in East Asia. Another group with supra-regional influence are African diasporic religions, which have their origins in Central and West Africa.

Major denominations and religions of the world

One way to define a major religion is by the number of current adherents. The population numbers by religion are computed by a combination of census reports and population surveys (in countries where religion data is not collected in census, for example USA or France), but results can vary widely depending on the way questions are phrased, the definitions of religion used and the bias of the agencies or organizations conducting the survey. Informal or unorganized religions are especially difficult to count.

There is no consensus among researchers as to the best methodology for determining the religiosity profile of the world's population. A number of fundamental aspects are unresolved:

Largest religions or belief systems by number of adherents

The table below lists religions classified by philosophy; however, religious philosophy is not always the determining factor in local practice. Please note that this table includes heterodox movements as adherents to their larger philosophical category, although this may be disputed by others within that category. For example, Cao Đài is listed because it claims to be a separate category from Buddhism, while Hoa Hao is not, even though they are similar new religious movements.

The population numbers below are computed by a combination of census reports, random surveys (in countries where religion data is not collected in census, for example USA or France), and self-reported attendance numbers, but results can vary widely depending on the way questions are phrased, the definitions of religion used and the bias of the agencies or organizations conducting the survey. Informal or unorganized religions are especially difficult to count. Some organizations may wildly inflate their numbers.

Further information: Claims to be the fastest-growing religion

Since the late 19th century, the demographics of religion have changed a great deal. Some countries with a historically large Christian population have experienced a significant decline in the numbers of professed active Christians: see demographics of atheism. Symptoms of the decline in active participation in Christian religious life include declining recruitment for the priesthood and monastic life, as well as diminishing attendance at church. On the other hand, since the 19th century, large areas of sub-saharan Africa have been converted to Christianity, and this area of the world has the highest population growth rate. In the realm of Western civilization, there has been an increase in the number of people who identify themselves as secular humanists. In many countries, such as the People's Republic of China, communist governments have discouraged religion, making it difficult to count the actual number of believers. However, after the collapse of communism in numerous countries of Eastern Europe and the former Soviet Union, religious life has been experiencing resurgence there, both in the form of traditional Eastern Christianity and particularly in the forms of Neopaganism and Far Eastern religions.[citation needed]

Following is some available data based on the work of the World Christian Encyclopedia:[39]

Studies conducted by the Pew Research Center have found that, generally, poorer nations had a larger proportion of citizens who found religion to be very important than richer nations, with the exceptions of the United States[10] and Kuwait.[44]