Traditional Native American religions exhibit a great deal of diversity, largely due to the relative isolation of the different tribes that were spread out across the entire breadth of the North American continent for thousands of years, allowing for the evolution of different beliefs and practices between tribes.

Native American spirituality is often characterized by panentheism, a strong emphasis on the importance of personal spirituality and its inter-connectivity with one's own daily life, and a deep connection between the natural and spiritual 'worlds'.

Native American religions tend not to be institutionalized but rather experiential and personal. This has been a source of a great deal of misunderstanding. Individual asceticism through sweat lodge ceremonies and other events along with rituals that appear to resemble idol worship make understanding their faith and religion problematic at best. Native American religions tend to be carried out mainly in a family or tribal location first and are better explained as more of a process or journey than a religion.[2] It is a relationship experienced between Creator and created. For Native Americans, religion is never separated from one's daily life unlike Western cultures where religion is experienced privately and gradually integrated into one's public life. Conversation about theology and religion, even within their society, is extremely limited but to live and breathe is to worship. For Native Americans, a relationship with God is experienced as a relationship with all of creation which interestingly, is ever present and does not require an institution or building. All of creation has life. Rocks, trees, mountains, and everything that is visible lives and is part of creation and therefore has life which must be respected. Achiel Peelman suggests that, “strictly speaking, Amerindians do not believe in God but know God as an intrinsic dimension of all their relations.”[3] God is known indirectly through an awareness of the relationships or links between various aspects of both the physical and supernatural realms. Spirituality of the Native Americans makes no distinction between these realms; the living and dead, visible and invisible, past and present, and heaven and earth.

Most adherents to traditional American Indian ways do not see their spiritual beliefs and practices as a "religion"; rather, they see their whole culture and social structure as infused with 'spirituality' - an integral part of their lives and culture.[4][5]

The introduction of European civilization to North America brought military conquest, economic pursuits and Christianity to the native population. Ignoring immense differences in culture in the inhabitants of North America, Europeans linked all the aborigines together as "Indians", denied their right to the soil, and sought to trade with and convert them to whatever brand of Christianity the colonizers espoused.[6] Today, Christianity is the predominant religion in several Native American communities. Generally speaking, these communities are "fundamentalist in theology, conservative in their practice, and often revivalistic and evangelical."[7] Many Native Americans also practice Christianity in combination with another tribal religion.

This replica of an Iroquois longhouse represents where the traditional practices of the Native religion took place.

The Waashat Religion is also called the Washani Religion, Longhouse Religion, Seven Drum Religion, Sunday Dance Religion, or Prophet Dance and it originates with the Columbia Plateau Indians. It is unclear exactly how it started or when Christianity influenced the earlier form, but it is thought to have something to do with the arrival of non-Indians or an epidemic and a prophet with an apocalyptic vision. The Waashat Dance involves seven drummers, a salmon feast, use of eagle and swan feathers and a sacred song sung every seventh day.[9]

The Wanapam Indian Smohalla used Waashat rituals to start a new religion in the Pacific Northwest. He declared that he had visited the spirit world and had been sent back to teach his people. He urged a return to the original way of life before white influences and established ceremonial music and dancing. Smohalla claimed that these visions came to him through dreams. His speaking was called Yuyunipitqana for “Shouting Mountain".[10]

Also known as Tschadam, the Indian Shaker Religion was influenced by the Waashat Religion and was founded by John Slocum, a Squaxin Island member. The name comes from the shaking and twitching motions used by the participants to brush off their sins. The religion combined Christianity with traditional Indian teachings. This religion is still practiced today in the Indian Shaker Church.[11]

The Drum Religion, also known as the "Big Drum," "Drum Dance," or "Dream Dance," originated around 1890 among the Santee Sioux (Dakota). It spread through the Western Great Lakes region to other Native American tribes such as the Chippewa (Ojibway), Meskwaki (Fox), Kickapoo, Menominee, Potawatomi, and Winnebago (Ho-chunk) and the golden hill paugussetts. It was a religious revilatlization movement created to encourage a sense of unity of Native peoples through rituals. These rituals included the playing and keeping sacred drums and the passing of sacred knowledge from tribe to tribe.[12]

The Earth Lodge Religion was founded in northern California and southern Oregon tribes such as the Wintun. It spread to tribes such as the Achomawi, Shasta, and Siletz, to name a few. It was also known as the "Warm House Dance" among the Pomo. It predicted occurrences similar to those predicted by the Ghost Dance such as the return of ancestors or the world's end. The Earth Lodge Religion impacted the later religious practice, the Dream Dance, belonging to the Klamath and the Modoc.[13]

The "Ghost Dance" is a very general term that encompasses different religious revitalization movements in the Western United States. In 1870, and Ghost Dance was founded by the Paiute prophet Wodziwob, and in 1889-1890, a Ghost Dance Religion was founded by Wovoka (Jack Wilson), who was also a Northern Paiute. The earliest Ghost Dance heavily influenced religions such as the Earth Lodge, Bole-Maru Religion, and the Dream Dance. The "Ghost Dances" practiced were meant to serve as a connection with "precontact ways of life and honored the dead while predicting their resurrection" (Waldman, 230).[14]

In December 1888, Wovoka (Jack Wilson) of the Northern Paiute(Numu), who was thought to be the son of the medicine man Tavibo (Numu-tibo'o), fell sick with a fever during an eclipse of the sun, which occurred on January 1, 1889. Upon his recovery he made the claim that he had visited the spirit world and the Supreme Being and made the prediction that the world would soon end then be restored to a pure aboriginal state in the presence of the messiah. All Native Americans would inherit this world, including those who were already dead, in order to live eternally without suffering. In order to reach this reality, Wovoka stated that all Native Americans should live honestly, and shun the ways of whites (especially the consumption of alcohol). He called for meditation, prayer, singing, and dancing as an alternative to mourning the dead, for they would soon resurrect. Wovoka's followers saw him as a form of the messiah and he became known as the "Red Man's Christ."

His supposed father, Tavibo, had participated in the Ghost Dance of 1870 and had a similar vision of the Great Spirit of Earth removing all white men, and then of an earthquake removing all human beings. Tavibo's vision concluded that Native Americans would return to live in a restored environment and that only believers in his revelations would be resurrected.

This religion spread to many tribes on reservations in the West, namely the Shoshone, Arapaho, Cheyenne, and Sioux (Dakota, Lakota, Nakota). In fact, some bands of Sioux were so desperate during wartime for hope that they strengthened their militancy after making a pilgrimage to Nevada in 1889-1890. They provided their own interpretation of the Gospel to their people which emphasized the elimination of white people. A Ghost Dance gathering in December 1890 actually led to the massacre of Sioux, who believed their Ghost Dance Shirts could stop bullets, at Wounded Knee.[15][16]

The Bole-Maru Religion was a religious revitalization movement of the Maidu, Pomo, Wintun, and other tribes of north-central California in the 19th century. Bole is a Wintun word (a Penutian language), maru is a Pomo word (a Hokan language); both refer to the dreams of shamans. They both draw on traditional as well as Christian beliefs and ethical guidelines, with revelations from dreams playing a central role. Some of the dances of this religion were the Bole or Maru dance, the Bole-Hesi Dance, and the Ball Dance. In these dances, dancers wore large headdresses.

The Dream Dance, a religious revitalization movement of the Klamath and Modoc, evolved out of the Ghost Dance and Earth Lodge Religion. It involved the power of dreams and visions of the dead. Unlike the Klamath and Modoc religions the Dream Dance did not predict an apocalypse and return of the dead. The religion was only practiced a short time in Oregon in the early 20th century. One of the founders was the Modoc shaman Doctor George.

The Feather Religion was a revitalization movement of the Pacific Northwest. It drew on elements of both the earlier Indian Shaker Religion and the Waashat Religion. The religion was founded in 1904 by Jake Hunt a Klickitat shaman. It is also referred to as the Feather Dance or the Spinning Religion. Sacred eagle feathers were used in ceremonies, one of which involved ritual spinning, hence the name Waskliki for "Spinning Religion." 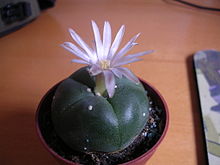 Peyote's illegal status in the United States prevents many non-Indians from participating in peyote ceremonies and becoming members of specific tribal religions.

The Peyote Religion, also called the "Peyote Cult," "Peyote Road," and the "Peyote Way," is a religious movement involving the ritual use of the Lophophora williamsii plant (peyote).[17] Use of peyote for religious purposes is thought to have originated within one of the following tribes: the Carrizo, the Lipan Apache, the Mescalero Apache, the Tonkawa, the Karankawa, and the Caddo, with the Carrizo and the Lipan Apache being the two most likely sources.[18] Since then,despite several efforts to make peyotism illegal, ritual peyote use has spread from the Mexico area to Oklahoma and other western parts of the United States.[19] Notable peyotists include Quannah Parker, the founder of the Native American Church, and Big Moon of the Kiowa tribe.

The American Indian Religious Freedom Act is a United States Federal Law and a joint resolution of Congress that provides protection for tribal culture and traditional religious rights such as access to sacred sites, freedom to worship through traditional ceremony, and use and possession of sacred objects for American Indians, Eskimos, Aleuts, and Native Hawaiians. It was passed on August 11, 1978.

The Religious Freedom Restoration Act was a congressional reaction to Supreme Court cases that limited the religious freedom of individuals by placing an unnecessary burden on their exercise of religion. The law provided for relief from government burdens on religion with two exceptions. A burden can be placed on the exercise of religion if a compelling government interest is pursued in the least restrictive way possible.