Red Lobster is a U.S. chain of seafood restaurants. It also operates in Canada, the UAE and Japan (Transliterated as レッドロブスター (Reddorobusutā?)). It is aimed at the mid-level "casual dining" segment of the market. The menu includes a variety of specialty seafood and non-seafood entrees, appetizers, salads, and desserts.

Red Lobster was founded in 1968 by entrepreneur Bill Darden and Charley Woodsby.[1] Originally billed as a "Harbor for Seafood Lovers", the original restaurant in Lakeland, Florida was followed by several others throughout the Southeast. General Mills acquired Red Lobster in 1970 as a five-unit restaurant company. The chain expanded rapidly in the 1980s. Red Lobster entered in Canada in the 1980's and is still present, but it it quitted the Québec market in the 1990's.

In 1995, Red Lobster (along with Olive Garden and other sister chains) became part of Darden Restaurants, which was spun off from General Mills as an independent, publicly traded corporation. Today, there are nearly 700 Red Lobster locations throughout the United States.

Red Lobster twice offered an endless snow crab leg promotion. However, in 2003 the promotion resulted in parent company Darden Restaurants taking a $3 million charge to third quarter earnings resulting in President Edna Morris' departure from the company. The ill-timed promotion was launched amid high wholesale crab legs prices. The chain also underestimated how many times guest would order more.[2] Further complicating matters at the restaurant level was the amount of time guests spent tableside in the restaurant cracking crab legs which increased wait times in the lobby and overall diminished guest capacity per hour. In more recent years, the chain has usually offered an endless shrimp promotion once per year. 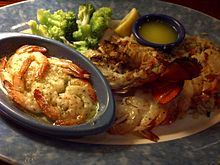 In June 2004, Red Lobster debuted a Lighthouse Menu for health-conscious consumers and dieters.[3] The menu lists items including appetizers, entrees, side-dishes, and sauces with the calorie count, total fat and saturated fat, sodium and carbohydrates. All items on the menu contain fewer than 500 calories, 15g of fat, 5g of saturated fat, 750 mg of sodium and 75g of carbohydrates.[4]

In October 2006, Red Lobster introduced a Today's Fresh Fish Menu to provide diners with more fresh-fish options and healthier alternatives.[5] The menu features 5-8 selections of fish including salmon, tilapia, mahi mahi and regional species such as pike and walleye.[6] The fish can be prepared blackened, broiled or wood-grilled and is available in full or half-size portions (5-8 oz.) The Today's Fresh Fish Menu was awarded a 2008 Menu Masters Award for "Best Menu / Line Extension".[7]

In November 2008, the chain installed a new cooking platform, wood-fired grills, in all of its restaurants. The company conducted guest focus groups and studied seventeen different cooking platforms before undergoing this change. They landed on wood grills for their ability to impart flavor and because of their widespread availability. The grills use oak wood, which brings out the natural flavor of seafood. As part of the roll-out Red Lobster trained and certified 3,500 crew members as Grill Masters who are experts at preparing different proteins including seafood, steak and chicken over a wood fire. Servers were also trained as seafood experts.[8] The restaurant also features a section of the menu dedicated to wood-grill entrees.[9][10] Following the introduction of wood-grills, Red Lobster introduced a Quick Catches Lunch Menu.[11] The menu features nine selections like Shrimp Jambalaya, Coastal Soup and Grilled Shrimp Salad and a Wood-Grilled BLT.[12]

Aside from its seafood and kids' toy treasure chest (since discontinued), Red Lobster is also known for its Cheddar Bay Biscuits which accompany a purchased entree; they are also available a la carte for carry out. The biscuits were introduced in the early 1990s; prior to that, Red Lobster served either garlic bread or hushpuppies. Red Lobster serves 1.1 million biscuits daily and over 395 million per year. The biscuits are baked fresh every 15 minutes.[13]

Red Lobster has received a number of awards including "#1 Best Seafood" in a 2009 Zagat Consumer Survey,[14] "Healthiest Sit Down Chain Restaurant in America" from Men's Health magazine's 2010 "Eat This, Not That" guide[15] and Restaurants & Institutions' Consumers' Choice in Chains award in the seafood category.[16] Guest satisfaction scores have also climbed nearly 10 percentage points to 78% in 2009.[8] 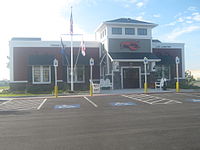 In 2009, Red Lobster debuted a new restaurant prototype modeled after coastal New England.[17] The new exterior features include shingle and stone towers, signal flags and Adirondack-style benches. Interior updates include dark wood paneling, warm-toned fabrics, soft lighting and nautical decor and artwork.[18] New menu items such as peppercorn-crusted salmon, wood-grilled shrimp bruschetta, lobster nachos and tilapia New Orleans are part of this update.[19] The company will continue to remodel its system of restaurants over the next several years.

There are currently 690 Red Lobster locations in North America. [8]

The busiest Red Lobster franchise in the country as of 2001 is reported to be in Munster, Indiana.[20]