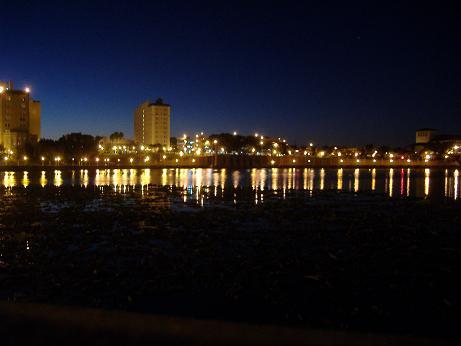 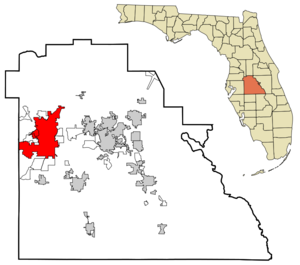 Lakeland is a in , , located approximately midway between Tampa and Orlando along . According to the 2006 estimate, the city had a population of 89,108.

Lakeland was first settled in the 1870s and began to develop as the rail lines reached the area in 1884. It was incorporated . The town was founded by (a resident of ), who purchased 80 acres of land in what is now downtown Lakeland in 1882 and ted the land for the town in 1884. Among the names considered (and rejected) for the town by its residents were Munnville, Red Bug and Rome City.

The Florida boom resulted in the construction of many significant structures in Lakeland, a number of which are today listed on the . This list includes the Terrace Hotel, New Florida Hotel (Regency Towers), Polk Theatre, Promenade of Lake Mirror, (not a product of the 20's boom), Park Trammell Building (formerly the Lakeland Public Library and today the Lakeland Chamber of Commerce), and others. The city also has several historic districts with many large buildings built during the 1920s and 1940s. The held spring training here from 1923 to 1927 at . Many new parks have been privately funded surrounding Lake Mirror. They are the Barnett Children's Park, Hollis Gardens, and the newest, Allen Kryger Park.

The "boom" period went "bust" quickly, and years passed before the city recovered. Part of the re-emergence was due to the arrival of the in 1934 for spring training. (The team continues to train at Lakeland's and owns the city's Florida State League team, the .) The development of the Lakeland Municipal Airport as a major facility in central Florida transportation was another factor. The 1930’s also featured the arrival of renowned architect . In 1938 he came to Lakeland at the request of President Ludd Spivey to design a "great education temple in Florida." For 20 years Wright worked on his "true American campus" creation. In his original master plan he called for 18 buildings (and several other structures), 9 of which were completed and nine left on the drawing board. All of the buildings were built out of what Wright called his "textile block system," the first use of such a system in Florida. He called his project "A Child of the Sun," so named from the architect’s own description of being "out of the ground, into the light, a child of the sun." It is the largest one-site collection of Frank Lloyd Wright buildings in the world, and in many ways helped to form a pattern for many colleges in Florida and other areas of the country in the future years.

During , Lakeland made an important contribution which directly contributed to the defeat of Hitler. Hundreds of young British men were taught to fly at Lakeland's Lodwick airfield by volunteer flight instructors, a collection of barnstormers and independent pilots. These British airmen enjoyed the hospitality of Lakeland during their training, then returned home to fight the Battle of Britain. Their skills in shooting down German warplanes was crucial to Britain's survival. When America entered the war, the Army Air Corps relied on training fields like Lodwick to supply pilots for its fighters, bombers, and transport planes.In 1990, Lakeland made its debut when the Southgate Shopping Center was featured in the hit movie "", starring and .

It is also mentioned near the end of the song "" when lead singer lists the cities burning across the .

Lakeland made national headlines on when Polk County Sheriff's Deputy Vernon "Matt" Williams and his K-9 partner, Diogi, were shot and killed after a routine traffic stop in the Kathleen area of the town. The incident sparked outrage among the central Florida law enforcement community. More than five-hundred law officials came together in search of , the suspect wanted in connection with the murder. The next morning Freeland was found hiding under a fallen tree. 9 SWAT Team members fired 110 shots at Freeland, hitting him 68 times and killing him on the spot. "God will be his judge and jury now" said [ [http://www.polksheriff.org/library/Bios/judd.html Resume of Colonel Grady C. Judd, Jr ] ] , adding "we ran out of bullets" on Oct 1, 2006 to the Orlando Sentinel. Deputy Williams and Diogi were laid to rest on after a funeral that included a one-hour and 45 minute procession to Auburndale. [ [http://www.theledger.com/apps/pbcs.dll/article?AID=/20061004/NEWS26/610040399 Information about Deputy Williams' funeral.] ]

Lakeland is home to one of the first Hindu temples in the United States. Fact|date=June 2008 Super Markets is also headquartered there. The first restaurant was opened there; however, the original restaurant has since closed.

Lakeland has seen explosive growth. According to the population in 2020 is projected to be 115,000 residents.

The local newspaper is "", owned by .

The local radio stations are:

Polk Community College shares a campus with a regional campus of the . In July 2008, USF Lakeland was granted partial autonomy by Gov. Charlie Crist. AT that point, the school officially became the University of South Florida Polytechnic. USFP plans a new campus located just inside the City of Lakeland's northeast border at the intersection of I-4 and the Polk Parkway.

Traviss Career Center is a [http://www.traviss.edu/] . It is ´s Training Center.

Attractions and points of interest