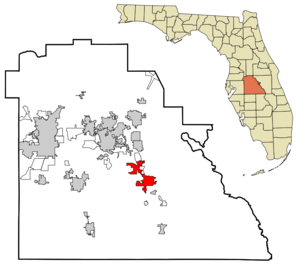 mapsize = 250x200px
map_caption = Location in Polk County and the state of

Lake Wales is a city in Polk County, , . The population was 10,194 at the 2000 census. As of , the population recorded by the is 11,802 [http://www.census.gov/popest/cities/tables/SUB-EST2004-04-12.xls] . The of Florida is located in Lake Wales [http://www.census.gov/geo/www/cenpop/statecenters.txt] . Lake Wales is located in central Florida, west of and east of Tampa. The Shrine of was nearby. Among the attractions in Lake Wales are , , and , an which makes a car in neutral appear as if it is traveling uphill (). A commercial historic district in the heart of the old town contains important examples of architecture from the period of the . The district's tallest building, the Hotel Grand, is boarded up and at risk of demolition. The winter months are quite mild but the summertime...expect to see temps from the mid 90's to the 100's. Lake Wales is right in the middle of Polk County. Polk County is one of the poorest counties in Florida, recently gaining the nickname "the ghetto of Florida".

There were 4,044 households out of which 29.4% had children under the age of 18 living with them, 40.5% were married couples living together, 18.2% had a female householder with no husband present, and 36.6% were non-families. 30.5% of all households were made up of individuals and 14.0% had someone living alone who was 65 years of age or older. The average household size was 2.44 and the average family size was 3.06.

Bus service is provided to and by .

The land around the present city was surveyed in 1879 by Sidney Irving Wailes, who changed the name of a lake, then known as Watts Lake, to Lake Wailes. [Morris, A. (1974) "Florida Place Names" University of Miami Press]

The city of Lake Wales was established near the lake in 1911-12, planned by the Lake Wales Land Company. [Frisbie, L.K. (1976) "Yesterday's Polk County" Imperial Publishing Company, Bartow, FL] . The spelling Wales was used for the city, although the lake is still generally spelt Lake Wailes.

In 1925 the built a new line from Haines City joining lines to Everglades City. A depot was opened on this line at Lake Wales.

Lake Wales High School (LWHS) plans to return the teaching of French and offer more college level courses. School officials plan to collaborate with Polk Community College, the University of Central Florida and Lake Wales Hospital to bring a higher level of learning to the students. Since the charter, LWHS has gone from one reading teacher to four reading teachers. They are in the process of adding an introduction to the engineering program with the collaboration of specialized professors from the University of Central Florida. They are also looking into the addition of German classes, upon students' approval. LWHS is hoping to raise 1 million dollars for renovations. By using fundraising and community support the school is hoping not only to remodel the academic structure but also to transform the scenery.

To compensate for the lack of grades six through eight in the charter system at the present time, Hillcrest Elementary and Babson Park Elementary have requested to have sixth grade added to their curriculum. In the two consecutive years Babson Park hopes to include seventh and eighth grade.