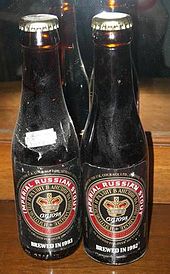 Stout is a dark beer made using roasted malt or barley,[1] hops, water and yeast. Stouts were traditionally the generic term for the strongest or stoutest porters, typically 7% or 8%,[2] produced by a brewery.

There are a number of variations including Baltic porter, dry stout and imperial stout. The name porter was first used in 1721 to describe a dark beer popular with street and river porters of London that had been made with roasted malts. This same beer later also became known as stout,[3] though the word stout had been used as early as 1677.[4] The history and development of stout and porter are intertwined.[5]

Porter was first recorded as being made and sold in London in the 1730s. It became very popular in the British Isles, and was responsible for the trend toward large regional breweries with "tied" pubs. With the advent of pale ale the popularity of dark beers decreased, apart from Ireland where the breweries of Guinness, Murphy's and Beamish grew in size with international interest in Irish (or dry) stout.

"Nourishing" and sweet "milk" stouts became popular in Great Britain in the years following the Second World War, though their popularity declined towards the end of the 20th century, apart from pockets of local interest such as in Glasgow with Sweetheart Stout.

With beer writers such as Michael Jackson writing about stouts and porters in the 1970s, there has been a moderate interest in the global specialty beer market.

Originally, the adjective stout meant "proud" or "brave", but later, after the 14th century, it took on the connotation of "strong". The first known use of the word stout for beer was in a document dated 1677 found in the Egerton Manuscript,[4] the sense being that a stout beer was a strong beer. The expression stout porter was applied during the 18th century to strong versions of porter, and was used by Guinness of Ireland in 1820 – although Guinness had been brewing porters since about 1780, having originally been an ale brewer from its foundation in 1759. Stout still meant only "strong" and it could be related to any kind of beer, as long as it was strong: in the UK it was possible to find "stout pale ale", for example. Later, stout was eventually to be associated only with porter, becoming a synonym of dark beer. During the last part of the 19th century, stout porter beer gained the reputation of being a healthful, strengthening drink, so that it was used by athletes and nursing mothers, while doctors often recommended it to help recovery.[6]

Because of the huge popularity of porters, brewers made them in a variety of strengths. The beers with higher gravities were called "Stout Porters". There is still division and debate on whether stouts should be a separate style from porter. Usually the only deciding factor is strength. [7] 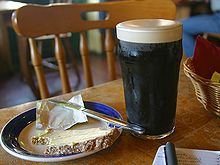 A pint of Guinness stout.

Stouts have a number of variations.

Irish stout or dry stout (in Irish, leann dubh, "black beer") is very dark or rich in colour and it often has a "toast" or coffee-like taste. The most famous example is Guinness followed by Murphy's and Beamish. There are also a number of smaller craft breweries producing stout. The alcoholic content and "dry" flavour of a dry or Irish stout are both characterised as light, although it varies from country to country.

Imperial stout, also known as "Russian imperial stout" or "imperial Russian stout," is a strong dark beer or stout in the style that was brewed in the 18th century by Thrale's brewery in London, England for export to the court of Catherine II of Russia.[8] In 1781 the brewery changed hands and the beer became known as Barclay Perkins Imperial Brown Stout. When the brewery was taken over by Courage the beer was renamed Courage Imperial Russian Stout.[9] It has a high alcohol content - nine or ten percent abv is common.

While there is a great deal of disagreement in the brewing world on this subject, at one time, porter was considered an alternative name for stout. It was originally used in the 18th century. Historically, there are no differences between stout and porter, though there has been a tendency for breweries to differentiate the strengths of their dark beers with the words "extra", "double" and "stout". The term stout was initially used to indicate a stronger porter than other porters issued by an individual brewery. Though not consistent, this is the usage that was most commonly employed.[5]

A version of porter which is brewed in Denmark, Finland, Estonia, Latvia, Lithuania, Poland, Russia and Sweden. It has a higher alcohol content than ordinary porters.[10] Export ales (see "Russian imperial stout" above) introduced from Britain in the 18th century were influenced by regional styles when they began to be produced locally. While it was once a top-fermenting beer, it is now mostly brewed as a lager-style bottom-fermenting beer in Slavic and Baltic breweries.[11]

Milk stout (also called sweet stout or cream stout) is a stout containing lactose, a sugar derived from milk. Because lactose is unfermentable by beer yeast, it adds sweetness, body, and calories to the finished beer. Milk stout was claimed to be nutritious, and was given to nursing mothers,[12] along with other stouts, such as Guinness.[13] The classic surviving example of milk stout is Mackeson's,[14] for which the original brewers claimed that "each pint contains the energising carbohydrates of 10 ounces of pure dairy milk". In the period just after the Second World War when rationing was in place, the British government required brewers to remove the word "milk" from labels and adverts, and any imagery associated with milk.[15]

Oatmeal stout is a stout with a proportion of oats, normally a maximum of 30%, added during the brewing process. Even though a larger proportion of oats in beer can lead to a bitter or astringent taste,[16] during the medieval period in Europe, oats were a common ingredient in ale,[17] and proportions up to 35% were standard. However, despite some areas of Europe, such as Norway, still clinging to the use of oats in brewing until the early part of the 20th century, the practice had largely died out by the 16th century, so much so that in 1513 Tudor sailors refused to drink oat beer offered to them because of the bitter flavour.[18][19]

There was a revival of interest in using oats during the end of the 19th century, when (supposedly) restorative, nourishing and invalid beers, such as the later milk stout, were popular, because of the association of porridge with health.[20] Maclay of Alloa produced an Original Oatmalt Stout in 1895 which used 70% "oatmalt", and a 63/- Oatmeal Stout in 1909, which used 30% "flaked (porridge) oats".[21]

In the 20th century many oatmeal stouts contained only a minimal amount of oats. For example, in 1936 Barclay Perkins Oatmeal Stout used only 0.5% oats.[22] As the oatmeal stout was parti-gyled with their porter and standard stout, these two also contained the same proportion of oats. The name seems to have been a marketing device more than anything else. In the 1920s and 1930s Whitbread's London Stout and Oatmeal Stout were identical, just packaged differently. The amount of oats Whitbread used was minimal, again just around 0.5%.[23] With such a small quantity of oats used, it could have had little impact on the flavour or texture of these beers.

Many breweries were still brewing oatmeal stouts in the 1950s, for example Brickwoods in Portsmouth, Matthew Brown in Blackburn and Ushers in Trowbridge.[24] When Michael Jackson mentioned the defunct Eldrige Pope "Oat Malt Stout" in his 1977 book The World Guide to Beer, oatmeal stout was no longer being made anywhere, but Charles Finkel, founder of Merchant du Vin, was curious enough to commission Samuel Smith to produce a version.[25] Samuel Smith's Oatmeal Stout then became the template for other breweries' versions.

One of the first to follow Samuel Smith was the Broughton brewery in the Scottish Borders with their Scottish Oatmeal Stout,[26] a 4.20% beer they have made since 1979 with roasted barley and pinhead oats. Young's Brewery of London were not long after with their 5.2% Oatmeal Stout, a beer that is mainly made for the North American market. One of the most notable of the US versions is the Anderson Valley Brewing Company's Barney Flats Oatmeal Stout, a bottle conditioned stout of 5.7% strength that has won several awards.[27] In Canada, McAuslan Brewing's St. Ambroise Oatmeal Stout has also attracted attention and a significant award.[28]

Oatmeal stouts are now made in several countries, including Australia, with Redoak of Sydney producing a 5% Oatmeal Stout[29] and WinterCoat of Denmark brewing a 5.9% Oatmeal Stout using roasted barley and chocolate malt.[30]

Oatmeal stouts usually do not specifically taste of oats. The smoothness of oatmeal stouts comes from the high content of proteins, lipids (includes fats and waxes), and gums imparted by the use of oats. The gums increase the viscosity and body adding to the sense of smoothness.[31]

Dark roasted malts, such as black patent malt (the darkest roast), can lend a bitter coffee flavour to dark beer. Some brewers like to emphasize the coffee flavour and add ground coffee. Brewers will often give these beers names such as "Guatemalan Coffee Stout", "Espresso Stout", "Breakfast Coffee Stout", "Stir Stick Stout", etc.

The ABV of these coffee flavoured stouts will vary from under 4% to over 8%. Most examples will be dry and bitter, though others add milk sugar to create a sweet stout which may then be given a name such as "Coffee & Cream Stout" or just "Coffee Cream Stout". Other flavours such as mint or chocolate may also be added in various combinations.

Oysters have had a long association with stout. When stouts were emerging in the 18th century, oysters were a commonplace food often served in public houses and taverns. Benjamin Disraeli is said[by whom?] to have enjoyed a meal of oysters and Guinness in the 19th century, though by the 20th century oyster beds were in decline, and stout had given way to pale ale.

The first known use of oysters as part of the brewing process of stout was in 1929 in New Zealand, followed by the Hammerton Brewery in London, UK, in 1938.[34] Several British brewers used oysters in stouts during the "nourishing stout" and "milk stout" period just after the Second World War.

Modern oyster stouts may be made with a handful of oysters in the barrel. Hence the claim of one Dublin establishment the Porterhouse Brewery that their award winning Oyster Stout was not suitable for vegetarians.[35] Others, such as Marston's Oyster Stout, just use the name with the implication that the beer would be suitable for drinking with oysters.