A glass of bitter

Bitter is an English term for pale ale.[1] Bitters vary in colour from gold to dark amber and in strength from 3% to 7% alcohol by volume.

Pale ale was a term used for beers made from malt dried with coke. Coke had been first used for roasting malt in 1642, but it wasn't until around 1703 that the term pale ale was first used. By 1784, advertisements were appearing in the Calcutta Gazette for "light and excellent" pale ale. By 1830, the expressions bitter and pale ale were synonymous in England[2] where breweries would tend to designate beers as pale ale, though customers in the pub would commonly refer to the same beers as bitter. It is thought that customers used the term bitter to differentiate these pale ales from other less noticeably hopped beers such as porter and mild. By the mid to late 20th century, while brewers were still labelling bottled beers as pale ale, they had begun identifying cask beers as bitter, except those from Burton on Trent, which tend to be referred to as pale ales regardless of the method of dispatch.

Bitter belongs to the pale ale style and can have a great variety of strength, flavour and appearance from dark amber to a golden summer ale. It can go under 3% abv - known as Boys Bitter - and as high as 7% with premium or strong bitters. The colour may be controlled by the addition of caramel colour.[3] 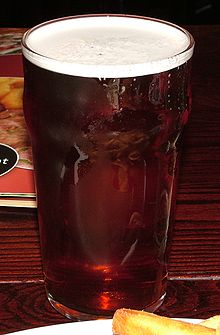 A pint of bitter

British brewers have several loose names for variations in beer strength, such as best bitter, special bitter, extra special bitter, and premium bitter. There is no agreed and defined difference between an ordinary and a best bitter other than one particular brewery's best bitter will usually be stronger than its ordinary. Two groups of drinkers may mark differently the point at which a best bitter then becomes a premium bitter. Hop levels will vary within each sub group, though there is a tendency for the hops in the session bitter group to be more noticeable.

Drinkers tend to loosely group the beers into:

Strength up to 4.1% abv. The majority of British beers with the name IPA will be found in this group, such as Greene King IPA, Deuchars IPA, Flowers IPA, Wadworth Henrys Original IPA, etc. Though bearing the name IPA, these session bitters are not as strong and hoppy as an India Pale Ale would be in the USA and elsewhere. IPAs with modest gravities (below 1040º) have been brewed in Britain since at least the 1920s.[4] This is the most common strength of bitter sold in British pubs. It accounts for 16.9% of pub sales.[5]

Strength between 4.2% and 4.7% abv. In the United Kingdom bitter above 4.2% abv accounts for just 2.9% of pub sales.[5] The disappearance of weaker bitters from some brewers' rosters means "best" bitter is actually the weakest in the range.

Strength of 4.8% abv and over. Also known as Extra Special Bitter, or in Canada and the USA, ESB (ESB is a brand name in the UK).

Light ale is a crisply carbonated, low hopped, low abv bottled bitter that is mainly used as a mix with another beer, but is sometimes used as a low alcohol beer.

The term pale ale is used in Scotland though ESB (for "Extra Special Bitter") is more commonly used in the United States. Where bitter is used it indicates a pale ale of lower alcohol content brewed in a less hop-focused style than typical American pale ales. American bitters often use English varieties of hops.