Lactose is a disaccharide sugar that is found most notably in milk and is formed from galactose and glucose. Lactose makes up around 2~8% of milk (by weight), although the amount varies among species and individuals. It is extracted from sweet or sour whey. The name comes from lac or lactis, the Latin word for milk, plus the -ose ending used to name sugars. It has a formula of C12H22O11.

Lactose was discovered in milk in 1619 by Fabriccio Bartoletti, and identified as a sugar in 1780 by Carl Wilhelm Scheele.[3] 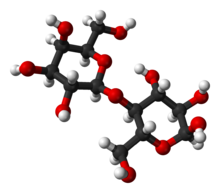 The molecular structure of α-lactose, as determined by X-ray crystallography.

Lactose is a disaccharide derived from the condensation of galactose and glucose, which form a β-1→4 glycosidic linkage. Its systematic name is β-D-galactopyranosyl-(1→4)-D-glucose. The glucose can be in either the α-pyranose form or the β-pyranose form, whereas the galactose can only have the β-pyranose form: hence α-lactose and β-lactose refer to anomeric form of the glucopyranose ring alone.

Lactose is hydrolysed to glucose and galactose, isomerised in alkaline solution to lactulose, and catalytically hydrogenated to the corresponding polyhydric alcohol, lactitol.[3]

Several million tons are produced annually as a by-product of the dairy industry. Whey is made of up 6.5% solids of which 4.8% is lactose that may be purified by crystallisation.[4] Whey or milk plasma is the liquid remaining after milk is curdled and strained, for example in the production of cheese. Lactose makes up about 2-8% of milk by weight. Lactose is purified from whey by adding ethanol. Since it is insoluble in ethanol, lactose precipitates in about 65% yield.[5]

Infant mammals nurse on their mothers to drink milk, which is rich in lactose. The intestinal villi secrete the enzyme called lactase (β-D-galactosidase) to digest it. This enzyme cleaves the lactose molecule into its two subunits, the simple sugars glucose and galactose, which can be absorbed. Since lactose occurs mostly in milk, in most mammals the production of lactase gradually decreases with maturity due to a lack of constant consumption.

Many people with ancestry in Europe, West Asia, India, and parts of East Africa maintain lactase production into adulthood. In many of these areas, milk from mammals such as cattle, goats, and sheep is used as a large source of food. Hence, it was in these regions that genes for lifelong lactase production first evolved. The genes of lactose tolerance have evolved independently in various ethnic groups.[6] By descent, more than 70% of western Europeans can drink milk as adults, compared with less than 30% of people from areas of Africa, eastern and south-eastern Asia and Oceania.[7] In people who are lactose intolerant, lactose is not broken down and provides food for gas-producing gut flora, which can lead to bloating, flatulence, and other gastrointestinal symptoms.

Food industry applications, both of pure lactose and lactose-containing dairy by-products, have markedly increased since the 1960s. For example, its bland flavour has lent to its use as a carrier and stabiliser of aromas and pharmaceutical products. Purified lactose can also be purchased, as high calorie diet additive.[8]

Lactose is little fermented by baker's yeast and during brewing, which may be used to advantage.[3] It is thus sometimes used to sweeten stout beer as it is non-fermentable in beer; the resulting beer is usually called a milk stout or a cream stout.

Another major use of lactose is in the pharmaceutical industry. Lactose is added to pills as a filler because of its physical properties (i.e., compressibility) and low price.