Dairy Queen, often abbreviated DQ, is a chain of soft serve and fast food restaurants owned by International Dairy Queen, Inc, who also owns Orange Julius and Karmelkorn. The name "Dairy Queen" is taken from the name of their soft serve product, which the company refers to as "Dairy Queen" or "DQ". The first Dairy Queen store opened in 1940 in Joliet, Illinois.[4] The company's corporate offices are located in Edina, Minnesota.[5][6]

The soft serve formula was first developed in 1938 by John Fremont "Grandpa" McCullough (1871‒1963),[1] his son Alex McCullough. They convinced friend and customer Herb Noble to offer the product in his ice cream store in Kankakee, Illinois. On the first day of sales, Noble dished out more than 1,600 servings of the new dessert within two hours.[7] Noble and the McCulloughs went on to open the first Dairy Queen store in 1940 in Joliet, Illinois. While this Dairy Queen is no longer in operation, the building is still located at 501 N Chicago St.[7] Since 1940, DQ has used a franchise system to expand its operations globally. The state with the most Dairy Queen restaurants is Texas. The Texas Dairy Queen Operators' Council facilitates marketing and the food system in Texas. Dairy Queen International is the parent company of Dairy Queen. In the US it operates under American Dairy Queen.[8][9] It is a wholly owned subsidiary of Berkshire Hathaway. At the end of its fiscal year 2006, Dairy Queen reported over 5,600 stores in more than a dozen countries; about 4,600 of its stores (approximately 85%) were located in the United States.[8][9][10]

DQ was an early pioneer of food franchising, expanding its 10 stores in 1941 to 100 by 1947, 1,446 in 1950, and 2,600 in 1955. The first store in Canada opened in Estevan, Saskatchewan, in 1953.[11] The red Dairy Queen symbol was introduced in 1959. The company became International Dairy Queen, Inc. (IDQ) in 1962. It was acquired by Berkshire Hathaway in 1998. Dairy Queens were a fixture of social life in small towns of the Midwestern and Southern United States during the 1950s and 1960s. In that role they have often come to be referenced as a symbol of life in small-town America, as in Walter Benjamin at the Dairy Queen: Reflections at Sixty and Beyond by Larry McMurtry, Dairy Queen Days by Robert Inman, and Chevrolet Summers, Dairy Queen Nights by Bob Greene.

As of 2010, Dairy Queen had more than 5,700 stores in 19 countries, including 652 locations outside the United States and Canada.[12] With Dairy Queen being one of the largest soft serve franchises in the world, their main competition includes: Baskin-Robbins, Ben & Jerry's, Braum's, Carvel, Culver's, Foster's Freeze, Good Times Burgers & Frozen Custard, McDonald's, Sonic Drive-In, Tastee Freez, and TCBY. The Busiest Dairy Queen is found in Charlottetown, Prince Edward Island.[13]

The company's stores are operated under several brands, all bearing the distinctive Dairy Queen logo and carrying the company's signature soft-serve ice cream (along with the trademark "curl"). In the 1970s, most Dairy Queen restaurants were "Brazier" locations with a second floor for storage, recognizable for their red gambrel-shaped roofs.

Stores which serve a very abbreviated menu primarily feature DQ frozen treats. These locations may be open only during spring and summer; many year-round locations are located in shopping malls.

So-called "Limited Brazier" locations may additionally offer hot dogs, barbecue beef (or pork) sandwiches, and in some cases french fries and chicken, but not hamburgers.

Also known as the "Treat Center" concept, an enhanced version of the original DQ also serves drinks and foods from the Orange Julius menu. This is the company's preferred concept for new, small-scale locations, primarily in shopping mall food courts.

Stores serve a normal fast-food menu featuring burgers, french fries, and processed fried chicken products in addition to frozen treats and hot dogs. Due to the protracted rollout of the Grill & Chill concept, Brazier restaurants have been allowed to sell certain products originally restricted to G&C, including GrillBurgers.

The name "Brazier" originated in 1957, when one of the company's franchisees worked to develop a food system that would work for all Dairy Queen restaurants. A brazier is a cooking device consisting of a charcoal or electric heating source over which food is grilled. The term "Brazier" was the result of a brainstorming session with the franchisee's advertising agency.[citation needed]

The "Brazier" name has been slowly phased out of signage and advertising since 1993, although until recently it had not been removed from existing signage. Since the early 2000s, new or renovated locations which are similar to Brazier restaurants in terms of size and menu selection, but have been updated with the current DQ logo and/or exterior, usually carry the name "DQ Restaurant", although the DQ website's Store Locator still lists the non-G&C stores as "Dairy Queen Brazier" and the smaller stores "Dairy Queen Ltd Brazier".

This is DQ's preferred concept for new and renovated full-service restaurants. Stores are larger than older-style DQ Brazier locations and feature a completely new store design. In most cases, they offer an expanded menu including breakfast, GrillBurgers, and grilled sandwiches, as well as limited table service (customers still place orders at the counter). They also contain self-serve soft drink fountains. Some of the DQ Brazier stores have upgraded to the DQ G&C stores. However, there are still DQ Brazier stores and DQ Ltd.-Brazier stores that have not upgraded to the DQ G&C stores. The nation's largest Grill & Chill is located in Bloomington, Illinois.

Most locations in Texas, including those which otherwise resemble the Brazier or Grill & Chill formats, use a separate hot food menu branded as Texas Country Foods. Among other differences, "Hungr-Buster" burgers are available in place of the Brazier and GrillBurger offerings. Other food offerings not found outside Texas include the Dude chicken fried steak sandwich, Grilled chicken sandwich, Country Baskets (steak fingers and chicken strips) and T-Brand Tacos. 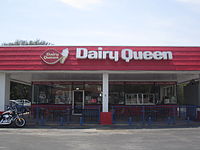 A Dairy Queen outlet in Burnet in the Texas Hill Country

Texas is home to the largest number of Dairy Queens in the U.S. All Texas Dairy Queen restaurants are owned and operated by franchisees. The Texas Dairy Queen Operators' Council (TDQOC) runs a separate marketing website from the national website, located at www.dqtexas.com. Bob Phillips, host of the popular Texas syndicated television series Texas Country Reporter, was for many years the DQ spokesman in Texas, as the restaurant was a co-sponsor of the program at the time.

The company's products expanded to include malts and milkshakes in 1949, banana splits in 1951, Dilly Bars in 1955, Mr. Misty slush treats in 1961 (later renamed Misty Slush, then again to Arctic Rush), and a range of hamburgers and other cooked foods under the Brazier banner in 1958. In 1967 the Peanut Buster Parfait, consisting of peanuts, hot fudge, and vanilla soft serve, was introduced. Other items include sundaes and the blended coffee drink, the MooLatte, controversial because of its resemblance to the racial descriptor Mulatto.[14]

Dairy Queen's one hundred (as of 1997) Japanese stores offered hamburgers, but competition from McDonald's made the chain switch to pita sandwiches.

The majority of Dairy Queen locations serve Coca-Cola products, but unlike most other restaurants such contracts are not mandated onto the franchisee, and as a result some locations serve Pepsi products instead. Subway (until 2003) and Arby's (until 2006) also allowed such leniency on beverage choice before signing exclusive soft drink deals with Coca-Cola and Pepsi, respectively, making Dairy Queen the last major restaurant chain without an exclusive soft drink contract.

A popular Dairy Queen item is the Blizzard, which is soft-serve mechanically blended with mix-in ingredients such as sundae toppings and/or pieces of cookies, brownies, or candy. It has been a staple on the menu since its introduction in 1985, a year in which Dairy Queen sold 100 million Blizzards.[15] Popular Blizzard flavors include: Oreo Cookies, mint Oreo, chocolate chip cookie dough, M&M's (Smarties in Canada), Reese's Peanut Butter Cup, Heath bar, and Butterfinger. Seasonal flavors are also available such as October's Pumpkin Pie.[16] It has been argued that Dairy Queen drew its inspiration from the concrete served by the St. Louis based Ted Drewes.[17] On July 26, 2010, Dairy Queen introduced a new "mini" size Blizzard, served in 6 oz. cups.

Prior to the introduction of the Blizzard in 1985, Dairy Queen served conventional "thick" milk shakes, in traditional flavors such as vanilla, chocolate, and strawberry, with or without added malt, also used the name "Blizzard" as the name of the product.

In addition, Dairy Queen is marketing its new Blizzard Cake which includes flavors such as strawberry cheesecake and Reese's. Much like the restaurant's conventional ice cream cake, this variation is aimed toward celebrations and birthdays.[18]

For many years the franchise's slogan was "We treat you right." During the early and mid 1990s, the slogan "Hot Eats, Cool Treats" came into use and preceded the aforementioned line in the Dairy Queen jingle. In recent years, it has been changed to "DQ: Something Different." The new slogan, featured in early 2011, is "So Good It's RiDQulous,"[22] with Dairy Queen's current logo infused in the word 'ridiculous'.

In Texas, at the end of the advertisement, there is a Texas flag waving, and the Texas state with the new DQ logo and slogan below saying, "That's What I Like About Texas."

Dennis the Menace appeared in Dairy Queen marketing from 1971 until 2001, when he was dropped because Dairy Queen felt children could no longer relate to him.[23]

The advertising recently focused on a mouth licking its large lips, which later transforms into the present Dairy Queen logo.

In 2011, the outlandish new spots feature a dapper man played by John Behlmann, sporting a moustache, performing crazy feats for Dairy Queen. After announcing tasty menu offers, he would do something outrageous, like blow bubbles with kittens in them, water ski while boxing, and break a piñata where Olympic gymnastics great Mary Lou Retton tumbles out.

The original retro-style neon sign with a cone, in Ottawa, Ontario, Canada

The original Dairy Queen logo was simply a stylized text sign with a soft serve cone at one end. In the late 1950s, the widely recognized red ovoid design was adopted. The initial shape was asymmetrical, with one of the side points having a greater extension than the other, especially when matched with the Brazier sign—a similarly sized yellow ovoid, tucked diagonally below its companion. By the 1970s, both sides were more closely matched, becoming symmetrical with the 2006 update [see Yahoo! images for comparison]. Some of the new 1950s signs continued to display a soft serve cone jutting from the right side. "Little Miss Dairy Queen" began appearing in Pennsylvania signage in 1961.[24] She had a Dutch bonnet, resembling the ovoid logo, with a pinafore apron over her dress and wooden shoes. A yellow trapezoid Brazier sign, placed below the red Dairy Queen logo, was developed in the late 1960s. It matched the roofline of the new store design of the era.

Although it had been used interchangeably with the Dairy Queen name for many decades, "DQ" became the company's official name in 2001. The font remained the same as the original signage introduced 60 years prior. Throughout this period, the company placed the registered mark symbol immediately to the right, on the bottom side of the logo. When the company modernized its signage and logos in late 2006, it modified the font and italicized the letters, as well as adding arced lines, an orange to represent its hot foods above and a blue one below to represent its ice cream products.[25] Additionally, in the new design the registered mark symbol was moved to be adjacent to the letter "Q".[26] The first overhaul of its logo in almost 70 years, the company claimed that the new logo would show brand growth and reflect the "fun and enjoyment" associated with its products.[25] Advertising industry observers have noted that the new logo was an unneeded update of known and trusted industry brand and that its new features were distracting.[26][27]

The original signage is still in use in older locations or in locations that use a "retro" design motif in the property's design. One example is the sign used at the Dairy Queen in Ottawa, Ontario, Canada.