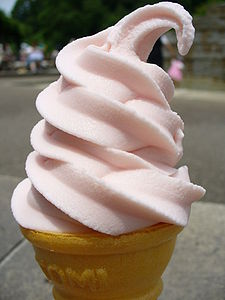 Soft serve is a term used to describe a type of ice cream that is softer than regular ice cream and that has been sold commecially since the late 1930s.[1]

Over Memorial Day weekend of 1934, Tom Carvel, the founder of the Carvel brand and franchise, suffered a flat tire in his ice cream truck in Hartsdale, New York--so he pulled into a parking lot next to a pottery store and began selling his melting ice cream to vacationers driving by. When (within two days) he had sold his entire supply of ice cream, he concluded that both a fixed location and soft (as opposed to hard) frozen desserts were potentially good business ideas. In 1936, Carvel opens first store on same site as broken down truck and develops a secret soft serve ice cream formula as well as patented super low temperature ice cream machines. [2].

Dairy Queen also claims to have invented soft serve. In 1938, near Moline, Illinois, J.F. McCullough and his son, Alex, developed their soft serve formula.[3] Their first sales experiment was August 4, 1938, in Kankakee, Illinois at the store of their friend Herb Noble. They sold 1,600 servings in two hours.[4]

Soft serve is generally lower in milk-fat (3% to 6%) than ice cream (10% to 18%) and is produced at a temperature of about −4 °C compared to ice cream, which is stored at −15 °C. Soft serve contains air, introduced at the time of freezing. The air content, called overrun, can vary from 0% to 60% of the total volume of finished product. The amount of air alters the taste of the finished product. Product with low quantities of air has a heavy, icy taste and appears more yellow. Product with higher air content tastes creamier, smoother and lighter and appears whiter. The optimum quantity of air is determined by the other ingredients and individual taste. It is generally accepted that the ideal air content should be between 33% and 45% of volume. More than this and the product loses taste, tends to shrink as it loses air and melts more quickly than that with less air.

All ice cream including soft serve must be frozen quickly to avoid crystallization. With soft serve, this is accomplished by a special machine at the point of sale. Pre-mixed product is introduced to the storage chamber of the machine where it is kept at 3 °C. When product is drawn from the draw valve, fresh mix combined with the targeted quantity of air is introduced to the freezing chamber either by gravity or pump. It is then churned and quick frozen and stored until required. It is usually served by being pumped out of a soft serve machine in circular swirls rather than served in scoops. 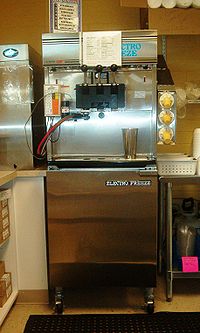 Vendors and restaurant chains which specialize in soft serve ice cream include: