Point of sale
This article is about checkout technology. For managed care, see point of service plan. 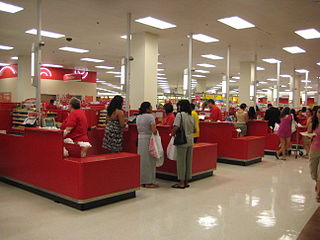 Points of sale at a Target store

Point of sale (POS) (also sometimes referred to as Point of purchase (POP) ) or checkout is the location where a transaction occurs. A "checkout" refers to a POS terminal or more generally to the hardware and software used for checkouts, the equivalent of an electronic cash register.

A POS terminal manages the selling process by a salesperson accessible interface. The same system allows the creation and printing of the receipt.

Software prior to the 1990s 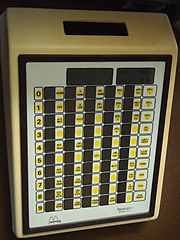 Early electronic cash registers (ECR) were controlled with proprietary software and were very limited in function and communications capability. In August 1973 IBM announced the IBM 3650 and 3660 Store Systems that were, in essence, a mainframe computer used as a store controller that could control 128 IBM 3653/3663 point of sale registers. This system was the first commercial use of client-server technology, peer-to-peer communications, local area network (LAN) simultaneous backup, and remote initialization. By mid-1974, it was installed in Pathmark Stores in New Jersey and Dillard's Department Stores.

One of the first microprocessor-controlled cash register systems was built by William Brobeck and Associates in 1974, for McDonald's Restaurants [1]. It used the Intel 8008, a very early microprocessor. Each station in the restaurant had its own device which displayed the entire order for a customer--for example: [2] Vanilla Shake, [1] Large Fries, [3] BigMac--using numeric keys and a button for every menu item. By pressing the [Grill] button, a second or third order could be worked on while the first transaction was in progress. When the customer was ready to pay, the [Total] button would calculate the bill, including sales tax for almost any jurisdiction in the United States. This made it accurate for McDonald's and very convenient for the servers and provided the restaurant owner with a check on the amount that should be in the cash drawers. Up to eight devices were connected to one of two interconnected computers so that printed reports, prices, and taxes could be handled from any desired device by putting it into Manager Mode. In addition to the error-correcting memory, accuracy was enhanced by having three copies of all important data with many numbers stored only as multiples of 3. Should one computer fail, the other could handle the entire store. Programmability allowed retailers to be more creative. In 1979 Gene Mosher's Old Canal Cafe in Syracuse, New York was using POS software written by Mosher that ran on an Apple II to take customer orders at the restaurant's front entrance and print complete preparation details in the restaurant's kitchen. In that novel context, customers would often proceed to their tables to find their food waiting for them already. This software included real time labor and food cost reports. In 1986 Mosher used the Atari ST and bundled NeoChrome paint to create and market the first graphical touchscreen POS software.

In 1992 Martin Goodwin and Bob Henry created the first point of sale software that could run on the Microsoft Windows platform named IT Retail.[2] Since then a wide range of POS applications have been developed on platforms such as Windows and Unix. The availability of local processing power, local data storage, networking, and graphical user interface made it possible to develop flexible and highly functional POS systems. Cost of such systems has also declined, as all the components can now be purchased off-the-shelf.

The key requirements that must be met by modern POS systems include: high and consistent operating speed, reliability, ease of use, remote supportability, low cost, and rich functionality. Retailers can reasonably expect to acquire such systems (including hardware) for about $4000 US (2009) per checkout lane.

Vendors and retailers are working to standardize development of computerized POS systems and simplify interconnecting POS devices. Two such initiatives are OPOS and JavaPOS, both of which conform to the UnifiedPOS standard led by The National Retail Foundation.

OPOS (OLE for POS) was the first commonly-adopted standard and was created by Microsoft, NCR Corporation, Epson and Fujitsu-ICL. OPOS is a COM-based interface compatible with all COM-enabled programming languages for Microsoft Windows. OPOS was first released in 1996. JavaPOS was developed by Sun Microsystems, IBM, and NCR Corporation in 1997 and first released in 1999. JavaPOS is for Java what OPOS is for Windows, and thus largely platform independent.

There are several communication protocols POS systems use to control peripherals. Among them are

There are also nearly as many proprietary protocols as there are companies making POS peripherals. EMAX, used by EMAX International, was a combination of AEDEX and IBM dumb terminal.

Most POS peripherals, such as displays and printers, support several of these command protocols in order to work with many different brands of POS terminals and computers.

The retailing industry is one of the predominant users of POS terminals.

A Retail Point of Sales system typically includes a computer, monitor, cash drawer, receipt printer, customer display and a barcode scanner, and the majority of retail POS systems also include a debit/credit card reader. It can also include a weight scale, integrated credit card processing system, a signature capture device and a customer pin pad device. More and more POS monitors use touch-screen technology for ease of use and a computer is built in to the monitor chassis for what is referred to as an all-in-one unit. All-in-one POS units save valuable counter space for the retailer. The POS system software can typically handle a myriad of customer based functions such as sales, returns, exchanges, layaways, gift cards, gift registries, customer loyalty programs, BOGO (buy one get one), quantity discounts and much more. POS software can also allow for functions such as pre-planned promotional sales, manufacturer coupon validation, foreign currency handling and multiple payment types.

The POS unit handles the sales to the consumer but it is only one part of the entire POS system used in a retail business. “Back-office” computers typically handle other functions of the POS system such as inventory control, purchasing, receiving and transferring of products to and from other locations. Other typical functions of a POS system are to store sales information for reporting purposes, sales trends and cost/price/profit analysis. Customer information may be stored for receivables management, marketing purposes and specific buying analysis. Many retail POS systems include an accounting interface that “feeds” sales and cost of goods information to independent accounting applications.

Hospitality point of sales systems are computerized systems incorporating registers, computers and peripheral equipment, usually on a computer network. Like other point of sale systems, these systems keep track of sales, labor and payroll, and can generate records used in accounting and book keeping. They may be accessed remotely by restaurant corporate offices, troubleshooters and other authorized parties.

Point of sales systems have revolutionized the restaurant industry, particularly in the fast food sector. In the most recent technologies, registers are computers, sometimes with touch screens. The registers connect to a server, often referred to as a "store controller" or a "central control unit." Printers and monitors are also found on the network. Additionally, remote servers can connect to store networks and monitor sales and other store data.

Newer, more sophisticated, systems are getting away from the central database "file server" type system and going to what is called a "cluster database". This eliminates any crashing or system downtime that can be associated with the back office file server. This technology allows 100% of the information to not only be stored, but also pulled from the local terminal. Thus eliminating the need to rely on a separate server for the system to operate.

Another innovation in technology for the restaurant industry is Wireless POS. Many restaurants with high volume use wireless handheld POS to collect orders which are sent to a server. The server sends required information to the kitchen in real time.

Point of sale systems in the hair and beauty industry have become very popular with increased use of computers. In order to run a salon efficiently it is essential to keep all appointments, client, employee roster and the checkout in a system where you can create performance reports for. The nature of salons and spas vary depending on the setup of the business and products offered in addition to the business. This is why POS comes along with most salon software.

In the fast food industry, registers may be at the front counter, or configured for drive through or walk through cashiering and order taking. Front counter registers take and serve orders at the same terminal, while drive through registers allow orders to be taken at one or more drive through windows, to be cashiered and served at another. In addition to registers, drive through and kitchen monitors may be used by store personnel to view orders. Once orders appear they may be deleted or recalled by "bump bars", small boxes which have different buttons for different uses. Drive through systems are often enhanced by the use of drive through wireless (or headset) systems which enable communications with drive through speakers.

Wireless systems consist of drive though microphones and speakers (often one speaker will serve both purposes), which are wired to a "base station" or "center module." This will, in turn broadcast to headsets. Headsets may be an all-in-one headset or one connected to a belt pack.

POS software allows for transfer of meal charges from dining room to guest room with a button or two. It may also need to be integrated with property management software.

POS software for this industry is very specialized compared to other industries. POS software must be able to handle special orders, Purchase Orders, Repair orders, Service and Rental Programs as well as typical Point of Sale Functions.

Special equipment is usually needed because of the environment that the Point of Sale System is exposed to. Wireless Devices, Battery Powered Devices, all in one units, and internet ready machines are typical in this industry. 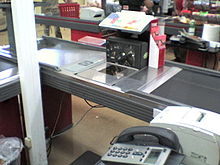 A Checkout in a Guatemalan supermarket.

Because of the expense involved with a POS system, the eBay guide recommends that if annual revenue exceeds the threshold of $700,000, investment in a POS system will be advantageous.[3]

POS systems are manufactured and serviced by such firms as Fujitsu, IBM, MICROS Systems, Panasonic, Radiant Systems, and Squirrel Systems (see the point of sale companies category for complete list).

Point of sales systems in restaurant environments operate on DOS, Windows or Unix environments. They can use a variety of physical layer protocols, though Ethernet is currently the preferred system.

Specific to the POS industry, generally including:

Top software, based on U.S. Install Base:

POS systems record sales for business and tax purposes. Illegal software dubbed "zappers" is increasingly used on them to falsify these records with a view to evading the payment of taxes.