Sex in advertising or sex sells is the use of sexual or erotic imagery (also called "sex appeal") in advertising to draw interest to a particular product, for purpose of sale. A feature of sex in advertising is that the imagery used, such as that of a pretty woman, typically has no connection to the product being advertised. The purpose of the imagery is to attract the attention of the potential customer or user. The type of imagery that may be used is very broad, and would include nudity, cheesecake, and beefcake, even if it is often only suggestively sexual. 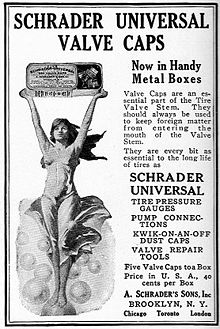 Images of pretty women often appear in ads even without connection to the product being sold. This provocatively clad woman lends "sex appeal" to a 1921 ad for tire valve caps 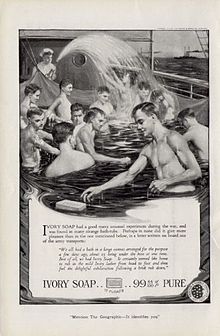 Sex has been utilized in advertising since its beginning. The earliest forms are wood carvings and illustrations of attractive women (often unclothed from the waist up) adorned posters, signs, and ads for saloons, tonics, and tobacco. In several notable cases, sex in advertising has been claimed as the reason for increased consumer interest and sales. The earliest known use of sex in advertising is by the Pearl Tobacco brand in 1871, which featured a naked maiden on the package cover. [1] In 1885, W. Duke & Sons inserted trading cards into cigarette packs that featured sexually provocative starlets. Duke grew to become the leading cigarette brand by 1890 (Porter, 1971). Woodbury's Facial Soap, a woman's beauty bar, was almost discontinued in 1910. The soap's sales decline was reversed, however, with ads containing images of romantic couples and promises of love and intimacy for those using the brand (Account Histories, 1926). Jovan Musk Oil, introduced in 1971, was promoted with sexual entendre and descriptions of the fragrance's sexual attraction properties. As a result, Jovane, Inc.'s revenue grew from $1.5 million in 1971 to $77 million by 1978 (Sloan & Millman, 1979).

The use of sex in advertising can be highly overt or extremely subtle. It ranges from relatively explicit displays of sexual acts, to the use of basic cosmetics to enhance attractive features.

Over the past two decades, the use of increasingly explicit sexual imagery in consumer-oriented print advertising has become almost commonplace. Sexuality is considered one of the most powerful tools of marketing and particularly advertising[citation needed]. Post-advertising sales response studies have shown it can be very effective for attracting immediate interest, holding that interest, and, in the context of that interest, introducing a product that somehow correlates with that interest.

In contemporary mainstream consumer advertising (e.g., magazines, network and cable television), sex is present in promotional messages for a wide range of branded goods. Ads feature provocative images of well-defined women (and men) in revealing outfits and postures selling clothing, alcohol, beauty products, and fragrances. Advertisers such as Calvin Klein, Victoria's Secret, and Pepsi use these images to cultivate a ubiquitous sex-tinged media presence. Also, sexual information is used to promote mainstream products not traditionally associated with sex. For example, the Dallas Opera recent reversal of declining ticket sales has been attributed to the marketing of the more lascivious parts of its performances (Chism, 1999).[2] 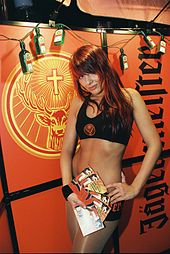 Sex in advertising builds on the premise that people are curious about sexuality and that experience in marketing has been that sexuality sells products. From a marketing point of view, sexuality can have biological, emotional/physical or spiritual aspects. The biological aspect of sexuality refers to the reproductive mechanism as well as the basic biological drive that exists in all species, which is hormonally controlled. The emotional or physical aspect of sexuality refers to the bond that exists between individuals, and is expressed through profound feelings or physical manifestations of emotions of love, trust, and caring. There is also a spiritual aspect of sexuality of an individual or as a connection with others. Advertisers may and do use the various aspects of sexuality in advertisements.

When sexuality is used in advertising, certain values and attitudes towards sex are necessarily 'sold' along with a product. In advertising terms, this is called "the concept". The message may be that "innocence is sexy" (as used by Calvin Klein when it uses young people in provocative poses), or that link pain and violence with sexiness and glamour (as used by Versace), or that women enjoy being dominated, or that women come with a product (e.g. in the advertisement for Budweiser Beer), or that the use of a certain product is naughty but legal, or that use of a certain product will make the user more attractive to the opposite sex, and many other messages.

When couples are used in an advertisement, the sex-roles played by each also sends out messages. The interaction of the couple may send out a message of relative dominance and power, and may stereotype the roles of one or both partners. Usually the message would be very subtle, and sometimes advertisements attract interest by changing stereotypical roles.

Use of sexual imagery in advertising has been criticized on various grounds. Religious Conservatives often consider it obscene. Some feminists and masculists claim it reinforces sexism by objectifying the individual. Increasingly, this argument has been complicated by growing use of androgynous and homoerotic themes in marketing.[3] Calvin Klein has been at the forefront of this movement, having himself declared -

"Jeans are about sex. The abundance of bare flesh is the last gasp of advertisers trying to give redundant products a new identity."

"Want to know what gets between me and my Calvin's? Nothing."[4]

Later in 1995 Klein's advertising campaign showed teenage models in provocative poses wearing Calvin Klein underwear and jeans. The ads were withdrawn when parents and child welfare groups threatened to protest and Hudson stores did not want their stores associated with the ads. It was reported that the Justice Department was investigating the ad campaign for possible violations of federal child pornography and exploitation laws.

In recent years ads for jeans, perfumes and many other products have featured provocative images that were designed to elicit sexual responses from as large a cross section of the population as possible, to shock by their ambivalence, or to appeal to repressed sexual desires, which are thought to carry a stronger emotional load. Increased tolerance, more tempered censorship, emancipatory developments and increasing buying power of previously neglected appreciative target groups in rich markets (mainly in the west) have led to a marked increase in the share of attractive flesh 'on display'.

Ad Age published a list of Top 100 most effective advertising of the century, out of the 100, only 8 involved use of sex.[5]

Unruly Media's viral video tracker lists the Top-20 most viewed car commercial viral videos. Only 1 uses sex, while the No.1 spot was held by VW's "The Force" ad.[6] The overall top-spot (across all product segments), was held by VW's "Fun Theory" campaign, the most viewed viral video as of October 2011. Many consumers and professionals are very aware that sex is an effective tool for selling but this question should be asked, "Does it work?" As many think, sex is used to grab a viewer's attention but this is a short term success. It doesn't affects the consumer's buying action. Some of the viewer doesn't even remember the brand. Using sex in advertising depends on the product.[7]