Out-of-home advertising (or outdoor advertising) is made up of more than 100 different formats, totaling $6.99 billion in annual revenues in 2008 in the USA.[1] Outdoor advertising is essentially any type of advertising that reaches the consumer while he or she is outside the home. This is in contrast with broadcast, print, and Internet advertising.

Out of home advertising, therefore, is focused on marketing to consumers when they are "on the go" in public places, in transit, waiting (such as in a medical office), and/or in specific commercial locations (such as in a retail venue). Outdoor advertising formats fall into four main categories: billboards, street furniture, transit, and alternative.[2]

Billboards are a part of American life, advertising for hundreds of thousands of small businesses. However, much advertising space, especially in cities, is given to multinational consumer brands.

Street furniture is made up of formats such as bus shelters, newsracks, mall kiosks, and telephone booth advertising. This form of outdoor advertising is mainly seen in urban centers. Additionally, this form of advertising provides benefits to communities, as street furniture companies are often responsible for building and maintaining the shelters people use while waiting for the bus.

Transit advertising is typically advertising placed on anything which moves, such as buses, subway advertising, truckside, and taxis, but also includes fixed static and electronic advertising at train and bus stations and platforms. Airport advertising, which helps businesses address an audience while traveling, is also included in this category. Municipalities often accept this form of advertising, as it provides revenue to city and port authorities.

Street furniture, transit, and alternative media formats comprise 34 percent of total outdoor revenue in the US. Some of these formats have a higher percentage of national ads than traditional billboards.[4]

Digital Out Of Home - DOOH

Digital out-of-home refers to dynamic media distributed across placed-based networks in venues including but not limited to cafes, bars, restaurants, health clubs, colleges, arenas and public spaces. DOOH networks typically feature independently addressable screens, kiosks, jukeboxes and/or jumbotrons. DOOH media benefits location owners and advertisers alike in being able to engage customers and/or audiences and extend the reach and effectiveness of marketing messages. It is also referred to as Digital Signage.

DOOH also includes stand-alone screens, kiosks, and interactive media found in public places. The availability of inexpensive LCD screens with built-in media players has opened the door for companies to add interactive video messages in Point of Purchase (POP) Displays. The displays allow consumers to get additional information at the moment of decision on a product or service. Growth in the DOOH industry has been increasing in 2009, with more POP manufacturers, advertisers, and content developers moving to digital.[5] 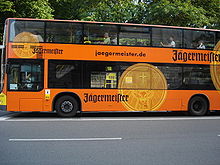 Vinyl decals allowing use of windows, on a side and rear advertisement for alcohol on a Berlin bus

Non-digital out-of-home refers to other types of media distributed across physical spaces. These are:[citation needed]

ComPark advertising - ComPark is a device used for car park advertising; which is placed onto the parallel lines of a bay and is able to gain instant exposure from motorists that have just parked their vehicle. The ComPark also serves as a guide to assist motorist in adhering to the parking bay size.

Mobile billboard - Mobile billboards offer a great degree of flexibility to advertisers. These advertisements can target specific routes, venue or events, or can be used to achieve market saturation. A special version is the inflatable billboard which can stand free nearly everywhere. This product can also be used for outdoor movie nights.

Poster - Target local audiences with these billboards, which are highly visible to vehicular traffic and are ideal for the introduction of new products/services. Marketers use posters to achieve advertising objectives and increase brand awareness by placing multiple units in strategic locations while lowering the cost per thousand impressions.

Premier panel - Premiere panels combine the frequency and reach of a poster campaign with the creative impact of a bulletin.

Street advertising - The use of pavements and street furniture to create media space for brands to get their message onto the street in a cost-effective approach.

Taxi advertising - Taxi advertising allows advertisers to highlight their products, whether brand awareness, or a targeted message, directly to areas where people work, shop, and play.

Wallscape - Wallscapes are attached to buildings and are able to accommodate a wide variety of unusual shapes and sizes. These billboard advertisements are visible from a distance and provide tremendous impact in major metro areas.

If a private property owner wants to sell advertising space to one of the outdoor advertising companies ('media sellers') he or she directly approaches the company. A media seller may also approach the owner of an interesting property and make a bid. The media seller typically requires a long term land lease due to the expense of erecting a new billboard. The private property owner is generally paid an annual land rent. The media seller erects a structure for displaying the ads and rents out the space to the clients. The world's largest media sellers are CBS Outdoor, JCDecaux, Clear Channel Outdoor,and Lamar Advertising.

Different jurisdictions regulate outdoor advertising to different degrees. In the US, the states of Vermont, Hawaii, Maine, and Alaska prohibit all billboards. Scenic America estimates the nationwide total of cities and communities prohibiting the construction of new billboards to be at least 1500.[6] In 2007, the city of Sao Paulo, Brazil, banned all billboards within the city.[7] There are also concerns within major cities about how many billboards and other forms of outdoor advertising are not in compliance with local by-laws, such as this website's database of alleged illegal billboards in Toronto, Canada. However, in the United States, strict laws protect against the taking of property without just compensation, making a Sao Paulo-like action highly unlikely in the U.S.