Androgyny is a term derived from the Greek words ανήρ, stem ανδρ- (anér, andr-, meaning man) and γυνή (gyné, meaning woman), referring to the combination of masculine and feminine characteristics. This may be as in fashion, sexual identity, or sexual lifestyle, or it may refer to biologically inter-sexed physicality, especially with regards to plant and human sexuality.[1]

For humans, an androgyne (pronounced /ˈændrədʒaɪn/ an-drə-jyn) in terms of gender identity, is a person who does not fit cleanly into the typical masculine and feminine gender roles of their society. They may also use the term ambigender to describe themselves. Many androgynes identify as being mentally "between" woman and man, or as entirely genderless. They may identify as non-gendered, genderneutral, agendered, between genders, multigendered, intergendered, pangender or gender fluid|genderballers.[citation needed]

The Bem Sex Role Inventory is one of the most widely used gender measures and was constructed by the early leading proponent of androgyny, Sandra Bem (1977).[2] Based on their responses to the items in the Bem Sex-Role Inventory, individuals are classified as having one of four gender-role orientations: masculine, feminine, androgynous, or undifferentiated. 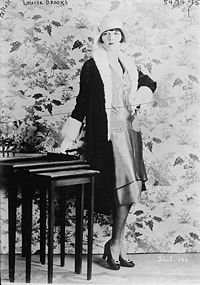 One study found that masculine and androgynous individuals had higher expectations for being able to control the outcomes of their academic efforts than feminine or undifferentiated individuals.[4] 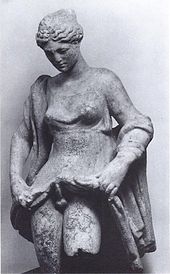 To say that a culture or relationship is androgynous is to say that it lacks rigid gender roles and that the people involved display characteristics or partake in activities traditionally associated with the other sex. The term androgynous is often used to refer to a person whose look or build make determining their gender difficult but is generally not used as a synonym for actual intersexuality, transgender or two-spirit people. Occasionally, people who do not actually define themselves as androgynes adapt their physical appearance to look androgynous. This outward androgyny has been used as a fashion statement, and some of the milder forms (women wearing men's trousers/men wearing skirts, for example) are not perceived as transgendered behavior.

Lesbians who do not define themselves as butch or femme may identify with various other labels including androgynous or andro for short. A few other examples include lipstick lesbian, tomboy, and 'tom suay' which is Thai for 'beautiful butch'. Some lesbians reject gender performativity labels altogether and resent their imposition by others. Note that androgynous and butch are often considered equivalent definitions, though less so in the butch/femme scene.

The recently coined word genderqueer is often used to refer to androgynes, but the terms genderqueer and androgyne (or androgynous) are neither equivalent nor interchangeable. Genderqueer is not specific to androgynes, does not denote gender identity, and may refer to any person, cisgender or transgender, whose behavior falls outside conventional gender norms. Furthermore, genderqueer, by virtue of its linkage with queer culture, carries sociopolitical connotations that androgyne does not carry. For these reasons, some androgynes may find the label genderqueer inaccurate, inapplicable, or offensive.

An androgyne may be attracted to people of any sex or gender, though many identify as pansexual or asexual. Terms such as bisexual, heterosexual, and homosexual have less meaning for androgynes who do not identify as men or women to begin with. Infrequently the words gynephilia and androphilia are used, which refer to the gender of the person someone is attracted to, and do not imply any particular gender on the part of the person who is feeling the attraction.

An alternative to androgyny is gender-role transcendence, the view that when an individual's competence is at issue, it should be conceptualized on a personal basis rather than on the basis of masculinity, femininity, or androgyny.[5]

In agenderism the division of people into women and men, in the psychical sense, is erroneous and artificial. It negates the biological sex (or lack thereof) as a carrier of specific features and tendencies of personality, and as a yardstick to determine human inside "I" (Ego). In the category of transgenderism (literally, being "beyond gender identity") a person like agender can be included in a sense which rejects functioning under of any psycho-cultural gender.[clarification needed]

The rise of androgyny in popular culture has also been on the increase in the 21st century and beyond,[6] with an increasing rise in both fashion industries,[7] as well as pop culture for acceptance and even popularity of the "androgynous" look, with several trends set by current pop stars, being hailed as creative trendsetters.

The rise of the metrosexual in the 2000s has also been described as a related phenomenon associated with this trend, and traditional gender stereotypes have been challenged as well as reset in recent years dating back to the 1960s and the hippie movement and flower power. Artists in film like Leonardo DiCaprio sported the "skinny" look in the 1990s- a departure from traditional masculinity which resulted in a fad known as "Leo Mania",[8] and this came long after musical superstars like David Bowie, Boy George, Prince, Annie Lennox challenged the norms in the 1970s and had elaborate cross gender wardrobes by the 1980s. These entertainers were known to have started trends of becoming increasingly conscious of their fashion and looks, and inadvertently raised trends as celebrities in the limelight that males were now increasingly interested in traditional female interests like clothing, fashion accessories, hairstyles, manicures, spa treatments and so on, which have seen the societal redefinition of traditional gender fashion norms, due to the popularity of these artistes with many people in the world today. These trends have arguably then gone on to reshape fashion, and clothing houses like Top Man, and designer labels have then seen an increase in sales in relevant "androgynous" merchandise.[9][10] Signed to the popular Konvict Muzik record label, Electropop artist Jeffree Star has received fame and made his career around his androgynous, often sexually explicit appearance and identity.

While the 1990s developed and fashion developed an affinity for unisex clothes and the rise of designers who favoured that look like Helmut Lang, Giorgio Armani and Pierre Cardin, the trends in fashion only hit the public mainstream in the 2000s, which saw men sporting longer hair, hairdyes, hair highlights, wearing jewellery, make up, visual kei, designer stubble, or the like, all of which been a significant mainstream trend of the 21st century, both in the western world, and in Asia.[11] Japanese and Korean cultures have been featuring the androgynous look as an ideal in society, as depicted in both K-pop, J-pop[12] and in Anime and Manga,[13] as well as the fashion industry.[14]