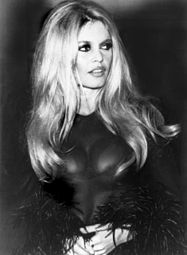 Brigitte Bardot was noted[1] for her sex appeal... 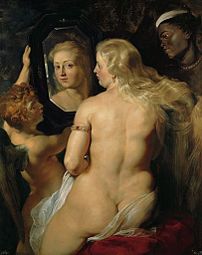 ...and the women in Rubens' paintings provoked[citation needed] similar reactions in their time.

Sexual attractiveness or sex appeal refers to an individual's ability to attract the sexual or erotic interest of another person, and is a factor in sexual selection or mate choice. The attraction can be to the physical or other qualities or traits of a person, or to such qualities in the context in which they appear. The attraction may be to a person's looks or movements or to their voice or smell, besides other factors. The attraction may be enhanced by a person's adornments, clothing, perfume, hair style, and anything else which can attract the sexual interest of another person. It can also be influenced by individual genetic, psychological, or cultural factors, or to other, more amorphous qualities of the person. Sexual attraction is also a response to another person that depends on a combination of the person possessing the traits and also on the criteria of the person who is attracted.

Though attempts have been made to devise objective criteria of sexual attractiveness, and even measure it as one of several bodily forms of capital asset (see erotic capital), a person's sexual attractiveness is to a large extent a subjective measure dependent on another person's interest, perception, and sexual orientation. For example, a gay or lesbian person would typically find a person of the same sex to be more attractive than one of the other gender. A bisexual person would find either sex to be attractive. Asexuality refers to those who do not experience sexual attraction for either sex, though they may have romantic attraction (homoromantic, biromantic or heteroromantic). Interpersonal attraction includes factors such as physical or psychological similarity, familiarity, similarity, complementarity, reciprocal liking, and reinforcement.[2]

The ability of a person's physical and other qualities to create a sexual interest in others is the basis of their use in advertising, film, and other visual media, as well as in modeling and other occupations.

Human sexuality has many aspects. In biology, sexuality describes the reproductive mechanism as well as the basic biological drive that exists in all sexually reproducing species and can encompass sexual intercourse and sexual contact in all its forms. There are also emotional and physical aspects of sexuality. These relate to the bond that exists between individuals, which may be expressed through profound feelings or emotions. Sociologically, it can cover the cultural, political, and legal aspects; philosophically, it can span the moral, ethical, theological, spiritual, and religious aspects.

Which aspects of a person's sexuality attract another is influenced by cultural factors, and has varied over time, as well as personal factors. Influencing factors may be determined more locally among sub-cultures, across sexual fields, or simply by the preferences of the individual. These preferences come about as a result of a complex variety of genetic, psychological, and cultural factors.

A person's physical appearance has a critical impact on their sexual attractiveness. This involves the impact one's appearance has on the senses, especially in the beginning of a relationship: 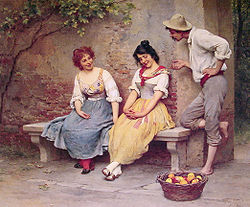 The Flirt by Eugene de Blaas

As with other animals, pheromones may also have an impact, though less significantly in the case of humans. Theoretically, the "wrong" pheromone may cause someone to be disliked, even when they would otherwise appear attractive. Frequently a pleasant smelling perfume is used to encourage the member of the opposite sex to more deeply inhale the air surrounding its wearer,[citation needed] increasing the probability that the pheromones from the individual will also be inhaled. The importance of pheromones in human relationships is probably limited and is widely disputed,[3] although it appears to have some scientific basis.[4]

Many people exhibit high levels of sexual fetishism, and are sexually stimulated by other stimuli not normally associated with sexual arousal. The degree to which such fetishism exists or has existed in different cultures is controversial.

People consciously or subconsciously enhance their sexual attractiveness or sex appeal for a number of reasons. It may be to attract someone with whom they can form a deeper relationship, for companionship, procreation, or an intimate relationship, besides other possible purposes. It can be part of a courtship process. This can involve physical aspects or interactive processes whereby people find and attract potential partners, and maintain a relationship. These processes, which involve attracting a partner and maintaining sexual interest, can include flirting, which can be used to attract the sexual attention of another in order to encourage romance or sexual relations, and can involve body language, conversation, joking, or brief physical contact.[5]