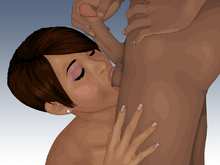 To tea bag is a slang term for the act of a man placing his scrotum in the mouth of a sexual partner or onto the face or head of another person. The practice resembles dipping a tea bag into a cup of tea when it is done in a repeated in-and-out motion. As a form of non-penetrative sex, it can be done for its own enjoyment or as foreplay.

According to columnist Dan Savage, the person whose scrotum is being stimulated is known as "the teabagger" and "the teabaggee" is the one giving the stimulation: "A teabagger dips sack; a teabaggee receives dipped sack."[9] Sex and relationship experts have varying definitions on how the act is performed. Some consider the act to be as simple as fellatio involving the scrotum.[6] Others consider the position to involve the man squatting over his reclined partner while the testicles are repeatedly raised and lowered into the mouth. Whether or not licking and fondling is considered tea bagging was once debated on the Howard Stern Show.[10]

Tea bagging is not always carried out consensually such as when it is done as a practical joke.[3] It has been used during hazing or bullying incidents with reports including groups holding down victims while the perpetrator "shoved his testicles in [the victim's] face"[11] or puts his "crotch to his head."[12][13]

Mimicking the act has become popular in multiplayer first person shooter video games. This is executed by the player who just killed an enemy running over to his corpse (if any) and repeatedly crouching in his opponent's face. This is done to humorously imply domination or humiliation.[12] Although considered by some to be bad sportsmanship, its use is widespread throughout amateur and possibly even professional gaming.[14]

In 2009, the right-leaning Tea Party movement formed in the United States, referencing the Boston Tea Party for its name. For the adherents of the Tea Party movement, the appellation "teabagger" emerged, prompting puns by politically-opposed commentators and protesters based on its sexual connotation.[15][16]